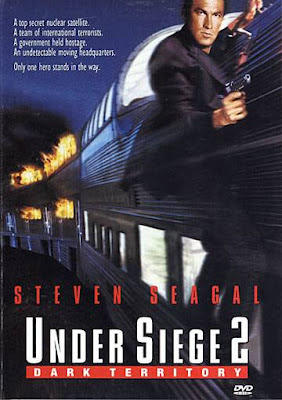 Somebody please slap me. Can you believe that I've never seen this film before until now? I honestly have no reasonable excuse as to why, but it's true. Maybe I didn't like the poster? Maybe I didn't like the idea that it was a sequel? I don't know. But for some strange reason I never gave this a shot and boy am I kicking myself for it right now.  Why? Because this was really great. Another prime example of Seagal's "Golden Age" and the kind of films they just don't make anymore.

Here he plays Casey Ryback, the chef from the first film only this time at the wrong place at the wrong time. He's on a train with his niece, who doesn't seem to like him when the train they are riding on is hijacked and it's up to Ryback to save the day.

So yea, though I was a big Seagal fan back in the day, even during this era, this one passed me by but here I am. Finally giving it a shot so here we go. So this was about the time when his star started to fade. Maybe it was because of the atrocity he committed in the form of On Deadly Ground, maybe because he was getting bigger or older or slower or harder to understand? Maybe it was all of these things? The fact of the matter is that "message" film On Deadly Ground severely changed everything and things were never the same again. So I suppose after a disaster like that he thought the best thing to do would be to revisit probably the biggest film of his career up until that point, the box office smash Under Siege. I probably would have.

Under Siege 2: Dark Territory is a great good ol' fashioned 90's action film. It's got a great look, a great vibe and a great cast. I love how Seagal is a very specific and atypical kind of action star. His fights are never flashy and he's not doing flips or roundhouses or anything like that. In his case it's more about getting in close and bringing him down with the least amount of moves possible, which isn't very big on spectacle, but very effective. He also has a nice supporting cast to round out the film. Eric Bogosian as the nerdy tech mastermind was great. I know he's well known for his one man shows, but I have only ever seen him as the captain on Law & Order: Criminal Intent, which he's great in. But to see him play a little whacko was also great and refreshing. Of course Seagal has a sidekick in this one in the form of a baggage handler, which also provides a lot of the laughs which was also nice. The who's who of character actors that make up the small army of bad guys was awesome. Much like my experience watching Brain Smasher, A Love Story recently, it was fun pointing every single one of them out and pinpointing which films I remember them from, where they also played bad guys. Great stuff and great fun.

It was about this time where I started to lose interest in him as an action star. Personally, my favorites are all his early films up until this point. Only sporadically would I enjoy one in the years after this, but there were a few like The Glimmer Man and Exit Wounds that I do in fact enjoy. Buuuuut hey, we have some really great late 80's to mid 90's action films from this guy that have stood the test of time.

Special thanks to Jack over at Collected Cinema for his enthusiastic review of this one recently, which got me to finally get off my ass and seek it out.
Posted by robotGEEK at 2:22 PM