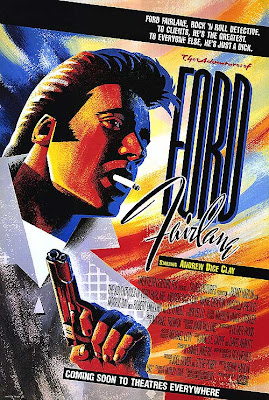 Call me crazy, but I have a really soft spot for this film. In fact, I love it. I know Andrew Dice Clay isn't everybody's cup of tea, and I don't really care much for his brand of humor myself, but the guy can be funny, and above all else he can act when he needs to act, pretty well actually. I remember a television show he did a while back where he played an average Joe and he was married to Cathy Moriarty. I don't remember the name of it but thought he was great as a Al Bundy type. I thought this was the film that was going to make his acting career explode, but that never happened. The film was a flop and his box office career went nowhere after this.

There are a few reasons why I love this so much. Renny Harlin in the directors chair for one. He made this the same year as Die Hard 2 and it's a stylish testament to his "former" directing chops. The guy had a talent and a unique style back then. Unfortunately he seemed to have lost this style and converted into different styles altogether, first with a more freestyle steadicam approach with insane amounts of slow motion with films like Cliffhanger and The Long Kiss Goodnight, and then into something else entirely that I can only describe as lazy and uninspired with pretty much every film after Deep Blue Sea in 1999. I keep hoping and waiting he will deliver another winner again, but it's been a long, long wait.

But anyway, I'm getting off track here. Visually, it's stylistically awesome, brilliant even in some scenes. It's got a fun frenetic energy and pace, an insane amount of over the top characters, and Andrew Dice Clay just knocking this out of the park. Yes, his jokes are vulgar, offensive and insanely insensitive, but they're also hilarious. Most of them anyway. His voice over narration even had me cracking up. I had been wanting to see this again for years, but never got the chance. And when this came up on Netflix the other day, I jumped at it and on a day where I needed some cheering up, this did the trick ten fold. It was funny, it had action, a ridiculous plot with even more ridiculous scenarios, and and a who's who of entertainment types in all fields supplying cameos and supporting roles. Just a fun time all around. And when is it not fun to watch Wayne Newton as an evil villain? Never!

I've gotta say it again. I'm surprised Clay's acting career never took off. I thought he did great in this, funny when he needed to be, but also really good when it called for him to be serious. I had envisioned this being a series of films, with a different director and a different tone with each one. Like maybe one would be more serious than the other or maybe it would have progressed into something like that. Or maybe it would've just turned into another Beverly Hills Cop trilogy. First was good, second was the best and most awesome, and the third just left a bad taste your mouth. I guess we'll never know. What I do know though is that Clay nails the character and director Renny Harlin knocks this one out of the park creating a fun ridiculous movie. A cool mix of style, cameos, action and comedy and Robert Englund as an English hitman with a penchant for dominatrix. It just doesn't get any better than this.
Posted by robotGEEK at 7:49 AM