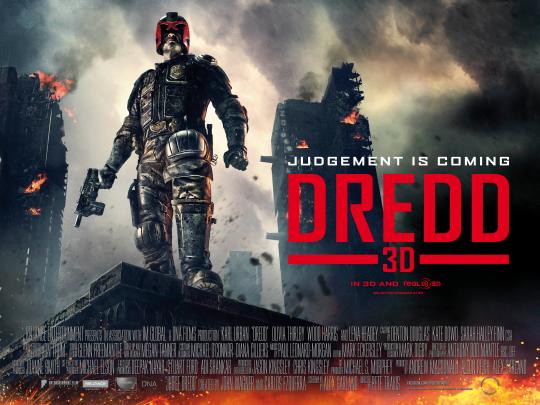 Dredd Ruuuuuuuules!!
It seriously does. Dredd is one of the best Hard R action films I've seen in many, many years to actually hit the theaters. By now I'm sure you've read that that's probably why it isn't making much money at the box office, because we all know PG 13 means more butts in the seats, but I just couldn't imagine a softened version of this insanely badass film. I just couldn't. It wouldn't work, because that's not the world Judge Dredd lives in. And that's not the kind of world we in the filmgeek community want to see him in either.

Dredd starts off with a bang and does not let up until the film is over 95 minutes later. It's dark, gritty, violent, bloody and visually impressive from start to finish. No cop-out shaky cam or quick editing here. Director Pete Travis takes his time and gives the film an impressive visual panache, but most importantly, he keeps the camera still. I mean, honestly, that's a big deal for me because that rarely happens anymore. But we've also got a great script from 28 Days Later scribe Alex Garland, who keeps the story simple, yet effective. Essentially, Dredd is stuck training a rookie (Judge Anderson) for a day, who ultimately get stuck in a building run by drug lord Ma-Ma (Lena Headey) while responding to a couple of dead bodies who seem to have fallen from several stories up. Except for an excellent chase sequence at the beginning of the film, the majority of Dredd takes place inside this building where Judge Dredd (Karl Urban), Judge Anderson (Olivia Thirlby) and their suspect must try to make their way out alive. That's me putting it simply. There's more to it than that, but that's the gist of it and all you really need to know going in. You don't want me to spell "everything" out for you, do you?

Let me just say, Karl Urban nails it. Tough as nails, but more subdued than Stallone's 1995 interpretation and with kind of a Clint Eastwood rasp, Urban embodies everything we have come to love about the Judge Dredd character and succeeds in breathing life into a character that's still not very well known to the average moviegoer. You want to know the best thing? Dredd never once takes off his helmet in the entire film. Who cares what he looks like under there? Who cares where he came from or how he came to be one of the toughest Judges in Mega City One? These were all things that the filmmakers felt a need to explain in detail in director Danny Cannon's original 1995 Judge Dredd starring Sylvester Stallone, currently holding the #1 spot as my most viewed review here on robotGEEK's Cult Cinema for quite some time. I love that deeply flawed original film, but for different reasons altogether. In this new version, the events take place through the course of one single day, and it's about survival. When it's all over and done with, it was just another day on the job for one of Mega City One's toughest Judges and it's back to work the next day. You see here, he's not yet the city's most feared Judge. Some know who he is, but he's just another hard working Judge doing what he does best, not having had that one case that brings him notoriety yet, unlike Stallone's version where he's considered almost a myth and feared by all.

You may have noticed I titled this Dredd and not Dredd 3D. That's because I chose to watch this in 2D rather than 3D. I know, I know. I hear this is one of the rare occasions where 3D worked really well for the film but I figured when it hits DVD and Blu ray, it's "not" going to be in 3D anyway, so why bother? Plus it saved me a few bucks. I'm just not a fan of 3D. I don't like how muted everything looks and I don't like how it's a post conversion job, as it ends up being most of the time. Hell, Guillermo del Toro's new film Pacific Rim is now going to be converted post into 3D. He, one of the last traditionalist filmmakers out there, has finally given in and frankly, I'm still trying to understand why.
I still enjoyed Dredd in 2D immensely and the now famous "Slow-Mo" sequences were still jaw dropping in there execution. 2D and all. Your senses just can't prepare you for the insane carnage you'll find in here. It's bloody awesome, reminding me a lot of the trio of Paul Verhoeven films that made him a household name with films like Robocop, Totoal Recall and Starship Troopers in terms of over the top violence. My buddy Renning made a striking comment on Facebook right after he saw this. He basically said that he hadn't liked a movie like this since the original Robocop. I have to agree.

While I wrap this up I'd like to touch on something that seems more evident with this film than any other of recent memory. Dredd opened to a weak 6 million at the box office, when I was almost certain it would have opened at number one, blowing away the competition. I'm still shocked at that. I'm shocked that a lame teen horror film and a Clint Eastwood baseball drama beat out Dredd. I just can't understand why, or how that can be. In this haze I stumbled upon a fascinating article by Paul Shirey over at JoBlo.com titled "C'mon Hollywood: What does the failure of Dredd tell us?". Such a good article and goes into detail as to why he thinks Dredd tanked at the box office it's opening weekend while other mediocre films went on to almost tie for the number one spot and where the general movie-going audience's state of mind is these days. Great article and it makes a lot of sense.

The general consensus for Dredd so far is very positive, receiving a 7.8 rating on IMDB and certified "fresh" with a 76 % rating on Rotten Tomatoes as of this posting. Very good ratings for a film these days. But go see it for yourself and make up your own mind.
Posted by robotGEEK at 5:31 PM