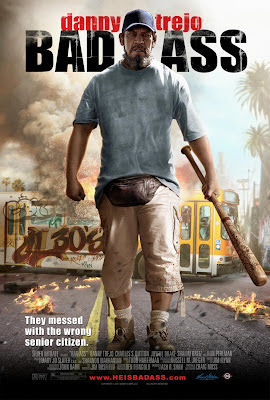 First thing's first. Yes, Bad Ass is indeed very Badass!
So that's out of the way and you can calm your fears and be rest assured that in the end, when it's all over you will have the comfort of knowing that this film kicks ass for 2 reasons, writer/director Craig Moss's self assured and even handed direction and Danny Trejo just simply owning this fucking movie. Danny Trejo rules. End of discussion.

This was a really fun flick. Danny Trejo delivers the goods. I mean, you just know he will but even I was kinda blown away by how awesome he was in here. I just love that guy! I have to tell you, I am just so happy that Trejo has been given the opportunity to show the world that he can do more than play the scary looking prisoner in the background. Here he shows more range than I've ever seen before, even crying in one sequence. And though he has a reputation for dispersing justice through his fists, he's one helluva nice guy. Very sweet, caring and charming. But you get in his face, or try holding up a liquor store or start rough housing your wife, you're gonna be sorry. He still comes out in an insane amount of DTV flicks as a supporting character, but at least we get gems like this and the Machete films from time to time.

In Bad Ass, Trejo plays a war vet who's down on his luck, barely able to make ends meet and who just wants to be left alone. When two skinheads start bothering an elderly man on the bus, he steps in and literally wipes the floor with them. Filmed by someone's cellphone camera he becomes an instant internet sensation and folk hero. Soon, trouble and trouble makers seem to follow him wherever he goes and his life will never be the same.


Sooooooo I don't feel like I can be completely honest if I didn't mention the one thing that bothered me about this movie. So the movie's rolling along nicely. It's made very well, has a lot of fights, a lot of heart and a lot of laughs. Bad Ass aka Frank Vega (Danny Trejo) finds the guy who's responsible for ordering the hit on his life long friend Klondike and next thing you know, they're on a full on bus chase knocking cars out of the road at the end of the film, destroying a water fountain in the process and crashing through a building when I realize I'm seeing a shot for shot sequence from the bus chase at the end of Walter Hill's excellent Red Heat.
Is it a ripoff? A homage? I don't know, but I go with it. It's ridiculous and feels completely out of place, but you know, it's a fun movie and this is a fun sequence. But being the die hard fan of Red Heat that I am it was bothering me. It looked almost exactly the same except for some intersplicing of Trejo and the bad guy pretending to drive a bus against a green screen and with a few digital effects thrown in for good measure. Then the sequence is over after the game of chicken they are playing and the bad guy's bus crashes into an oncoming train and yea, again shot for shot, even the way Trejo breaks out of his bus after he crashes it. Just like in Red Heat. But anyway, we move onto another location and another fight scene and the film wraps up nicely. But I can't get that whole bus chase sequence out of my head and so I do a little digging and find out that the director "did" use that sequence from Red Heat, only slightly altering it digitally and adding Trejo and the bad guy. Ok, so I have no idea why they took a whole complete sequence out of one of one of the best action movies to come out of the 80's and decided to put it in a small scale film 24 years later, but I digress. I don't know why it bothers me so much, but it does.


This is supposedly based on a true story, but from what I understand they changed a lot of the details. But whatever, it's fun. And I'll be honest, I wasn't really sure about this one. I love Danny Trejo, but I'd never heard of writer/director Craig Moss and you know how that goes. Sometimes these new young filmmakers just deliver shit. But I must say I was pleasantly surprised. Bad Ass retains a nice professional look and quality throughout and throw in an nice eclectic supporting cast that includes Charles S. Dutton and Ron Pearlman and you have one Bad Ass film.
Posted by robotGEEK at 1:52 PM