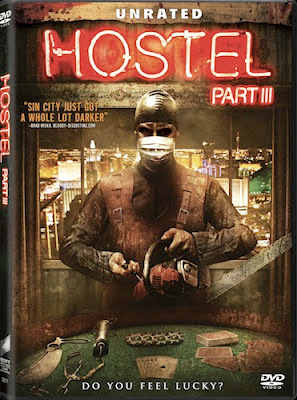 Hhhmmm, well, you have to expect that since this is the first in the series to not hit theaters, it's going to have a difference in substance and quality and that's exactly what we get here.

It's not a bad or crappy movie by any means.......it just feels so tame compared to the first two because in all honesty, there is not a lot of violence or even shock value. Yes, a few scenes here and there, but not what you'd come to expect from a Hostel film.

I admire Scott Spiegel as a director. His inventive camera work in Intruder is what really made that film what it was, besides the awesome amount of gore (Unrated Director's Cut Edition). You can tell he got a lot of inspiration and know how from his good friend Sam Raimi. His imprint is felt all around that movie. But with this film, it's very tame compared to his other films, which really surprised me because if ever there was a film that a filmmaker can go bugnuts insane with the inventive camera work and violence, you'd think it would be a Hostel film. But not in this case. While his style is very nice to look at and professional in Hostel III, it was a bit of a surprise to see Spiegel not go all out as he has in the past.

All in all, not a bad horror film. Well made with a professional look, not something you can say often these days with DTV horror films. It just needed more of everything to make it awesome. Noble effort though......
Posted by robotGEEK at 1:35 PM