Quick Shot: The Cabin in the Woods 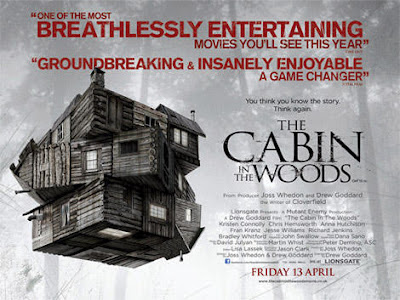 Sometimes a horror movie comes along and just kicks my ass. It is indeed a rare occurance, but it does happen and it just happened recently when I sat down to finally watch The Cabin in the Woods from Joss Whedon and Drew Goddard. Man oh man, what a blast! Let me just say, the trailers or even the positive buzz doesn't even begin to hint at the brilliance and vibe of this film.

I had every intention of checking this out in the theater, but as with most films I want to see at the theater, it just didn't happen. Recently hitting DVD and Blu-ray here in the states, I was strongly persuaded to see it by a huge fan, someone who shares almost the exact same taste in films as I and well, just simply based on her enthusiasm, I just had to. I was not only thoroughly entertained from beginning to end, but I was constantly surprised and while I knew what the big secret was before going in (some spoiler heavy reviewers just can't keep their mouth shut!), it still didn't prepare me for the insane amount of shit going on in here. While knowing what the secret was going in, of which the viewer is pretty much told right at the beginning, this still went in so many other directions that I hadn't anticipated that it was just so fucking refreshing and such a blast to watch. I only wish I had been able to see this with someone else and not by myself, but even then, I loved it because it was just awesome.

That being said, I won't get into the story................at all! No spoilers here because the less you know, the better. But what I will say, besides being such a blast, is that it's a very well made film from all angles, the production, the script, the actors, the effects and the genres, of which it tends to blend hardcore 80's horror with elements of sci-fi, classic horror while playing homage to a "lot" of our favorite horror films of the past with a wink, of which only hardcore filmgeeks will get most of the time. Written by Joss Whedon (The Avengers, Firefly, well you know who he is) and Drew Goddard (Cloverfield and big time television producer and writer), they seem to have set out to turn the horror genre on it's ear and to give it a new spin, something that the genre has been sorely missing for many, many years in the wake of all these lame ass remakes and shitty sub par horror films. They succeed ten fold. While praising these two guys I also have to give props to Goddard for doing a bang-up job on directing duties. I can't believe he's never directed a film before or since, because technically this was actually made in 2009. The full on horror elements are intense, and the gore aplenty, but never over the top to where it delves into the ridiculous. Ok, maybe towards the end, but even then it was just aaaaaaaawesome. Aaaahhh! I can't say enough about this film. Just go see it!
Posted by robotGEEK at 10:03 AM