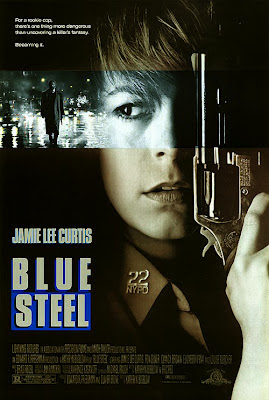 Kathryn Bigelow directs this stylish noir thriller 2 years after the awesome Near Dark and 2 years before the even more awesome bank robbing surfer film Point Break. So to me, this girl was on a creative high during this point in her directing career. I've always enjoyed her as a filmmaker, thought believe it or not the one film she won an Oscar for is the one film I actually like the least in her filmography. I know, I know, for shame. But as with most other action directors from the 80's and 90's (ahem Tony Scott anyone?) when The Hurt Locker came around, she had switched her more restrained and streamlined visual style to the heavily relied on handheld shaky-cam bullshit and it drove me nuts. It was a decent movie, but I felt it would have been so much better had she put more of an effort into the visual aspect of it, the way she did for films like Blue Steel and Point Break.

On her first day on the job, NYPD rookie Megan Turner (Jamie Lee Curtis) blows a would be robber away during a supermarket holdup. During the shooting, the robbers gun literally falls into the hands of innocent bystander and stockbroker Eugene Hunt (Ron Silver). As if tempted by fate, Eugene steals the gun and Turner's credibility and her version of events get tossed out the window since there's no gun to back up her claim that the robber aimed it at her before she blew him away. Having this weapon has somehow woken a sleeping demon in Eugene and before long he's become a serial killer loose on the streets killing at random and who's also tormenting Turner by carving her name on the bullet shell casings. A cat and mouse game ensues between Turner and the serial killer and she soon realizes that the killer may be closer than she thinks.

Believe me, I didn't give anything away since it's all basically laid out for you in the first 30 minutes leaving nothing to chance or for any kind of big reveal. And that's one of the problems I had with this. It was fun to watch and oozing with style, but not a whole lot of substance. They literally tell you everything almost immediately, even the identity of the serial killer, and though that's not "always" a bad thing (Silence of the Lambs did the same thing but did it so well), the script could certainly have used a lot of work because you end up screaming at your television set for almost  half the film at some of the most unbelievably idiotic and just plain stupid decisions these characters make. And the key word here is unbelievable because a lot of the things that go on here to push the story along are so odd and unbelievable that they clearly weren't going for any kind of realism. I could literally go on and on at specific scenes and sequences but that would end up becoming the bulk of this post.

It was nice seeing Jamie Lee Curtis in this kind of role. Up until this point she was usually in romantic comedies so seeing her play a plain Jane rookie police officer without trying to look attractive was refreshing and I must say she pulled it off nicely. Veteran character actor and all around badass Clancy Brown was a nice addition in here and it was even more refreshing to see him play someone other than the bad guy or some fucked up character. Here he plays a homicide detective who ends up trying to solve the serial killer murders along with Turner and though a hardass, does start to form a soft spot for Turner. But the one to really watch out for in here is Ron fucking Silver. The guy is just crazy in this. Don't get me wrong, I think the guy is great in everything he's in, seeing him most recently in the 80's Chuck Norris action flick Silent Rage. But here he was given to go full on psycho and he was awesome.

One of the other things that bothered me was that they never explain why Eugene Hunt (Silver) goes crazy just because he finds a gun. Up until that point he's a clean cut-suit wearing-high dollar stockbroker. Then he gets his hands on this stolen gun and he turns into a serial killer over night. He starts bathing in the blood of his victims, talking to himself in religious verses and all kinds of crazy things. And what he's able to get away with right under the police officers noses just drive you nuts. But like I said, realism wasn't a top priority here. Just don't take it too seriously and you'll enjoy it.

I know it sounds like I'm doing a lot of complaining, but it's hard not to with this film. But! I did in fact enjoy it quite a bit because while there are some annoyances, there's also a lot to enjoy as well. Top notch directing from Bigelow in top form, great performances all around and a dark film noir look and feel wrapped up in an urban detective thriller. Look past the absurdities and you should definitely enjoy this one.
Posted by robotGEEK at 6:27 PM