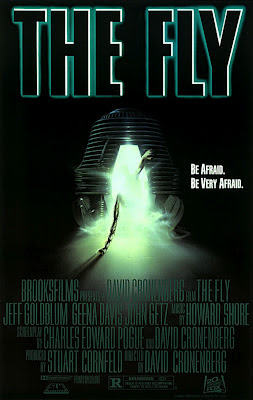 
Be Afraid. Be Very Afraid.

Released in 1986, 3 years after the excellent Videodrome and The Dead Zone, David Cronenberg again delivers a tour de force classy, mature and riveting horror film that only someone of his talent, intelligence and caliber can deliver.

I had completely forgotten how incredible and shocking this film was. Obviously, whenever most people talk about this remake it's of it's gross out effects sequences. And I have to admit, as much as I love that stuff, even I found some of it to be stomach turning. But I love that stuff! That just goes to show you how incredible the effects work is in here.

But if you can look past the effects and the gross out sequences (which are all excellent), you'll find a thoroughly captivating film that deals with one mans decent into a mental and physical transformation and into a hellish existence. And the casting of Jeff Goldblum as Seth Brundle was nothing short of brilliant. To see him go from a mild mannered genetic scientist looking thinly in his oversized 80's suit to a man dealing with both a physical and mental change as he appears to grow stronger and more agile by the day was nothing short of astonishing punching holes through the walls, hanging from the ceiling and becoming more physically built and imposing by the day. What's amazing is that it happens almost immediately after emerging from the pod, which was originally invented as a teleportation device to teleport himself from one pod to the other. Only during his initial transference,  a fly became trapped in the pod with him confusing the computer into combining the two on a molecular and genetic level when they were teleported from one pod to the other.

Honestly, for an intelligent horror film coming out of any era, it just doesn't get any better than this. Cronenberg was at the top of his game here delivering one awesome piece of horror cinema after another with films like Scanners, Videodrome, The Dead Zone, The Fly and Dead Ringers. He's stuck with thrillers for the most part since the early 90's, but the 80's was where he reigned supreme. I'd love to see him tackle another horror film again though, even if it was just one last time.

This was during a period when Goldblum and costar Geena Davis were in almost everything together it seemed. I know it was just like 3 movies I think, but since they were really in love and all over the tabloids at this time, it just feels like it was a lot more than 3 films. I may be wrong, but I think Earth Girls Are Easy was there last collaboration together. Oh what a mess. But here, they work splendidly together. Goldblum as the slightly charming, eccentric and changing scientist who grows more evil by the day, and Davis as the scared but sympathetic love interest who just can't stay away. I mean, you buy it completely from them and it works.

A little on the slow burn side for the first half, the story picks up pace immediately at the half way mark and doesn't let up for the remainder of the films running time. Often shocking, completely engaging and leaving a lasting impression on you long after it's over, The Fly is a masterpiece in intelligent adult horror films.
Posted by robotGEEK at 8:54 PM