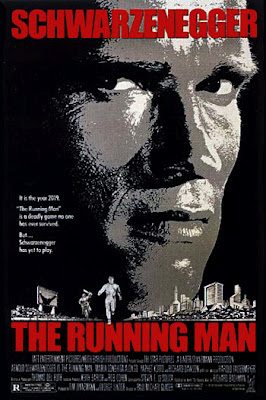 I gotta be honest. I enjoyed this one so much more than I remember. I've always been fond of The Running Man, but never liked it as much as his other films from the 80's which resulted in not watching it nearly as much as say Predator or Commando. And I think one of the things I remember not really liking was the choice of Paul Michael Glaser (Starsky of Starsky and Hutch fame) as director. He'd never done an action film of this caliber and I never really thought his style gelled well with this genre of film. Directing a few episodes of Miami Vice doesn't count. But seeing this again, so many years later and much more advanced in my age I can appreciate it a whole lot more on a much more mature level and in fact seeing that it's a pretty damn good 80's sci-fi / action film. You could even say it was a precursor to reality television and reality game shows for that matter because in 1986 I don't think there were even any in existence.

Set in the near future where everything from what to wear, what kind of music to listen to and what to drink has been completely controlled by the government, Ben Richards (Schwarzenegger) is a cop who is framed for a brutal massacre of innocent civilians. Escaping from prison, he's caught a short time later and forced to participate in the worlds most popular show called The Running Man, created and hosted by Damon Killian (Richard Dawson). The Running Man is a government controlled game show where convicted felons are thrown into a series of obstacles fighting for there lives while being chased by regulars known as "stalkers", each with there own brand of killing. To date, no Running Man contestant has ever survived until Richards enters the game. When stalkers start turning up dead, Killian turns up the heat by sabotaging the game and when that doesn't work, offering Richards a full time job as a stalker himself. Soon Richards only has one thing on his mind...........killing Damon Killian himself and putting an end to The Running Man.

This was a lot of fun with a great ensemble cast. Ahnuld being Ahnuld is always great, especially when he was in his prime like in the 80's. Yaphet Kotto, though a surprise to see here, was effective as was Richard Dawson who I only ever remember as the host of Family Feud. While I'm on the subject of casting, let me take this moment to mention the incredibly odd supporting cast here, first and foremost with Dweezil Zappa and Mick Fleetwood (huh?). But then you also have Jim Brown sporting a really funky hairdo as the stalker Firebal, Jesse "the body" Ventura sporting a really funky hairpiece as retired stalker Captain Freedom and the big guy who plays the stalker Dynamo who sports a mohawk made out of light bulbs who doesn't really seem to be able to do shit as a stalker to be honest. And let's not forget Schwarzenegger mainstay Sven-Ole Thorsen as a bodyguard. Fun cast to say the least.

There's nothing truly remarkable about The Running Man, unless you count the behind the scenes stuff. It's from a story written by Stephen King under a pseudonym and directed by one half of Starsky and Hutch. That's an odd combination in my book. But luckily we have 80's and 90's legendary action screenwriter Steven E. de Souza (48 Hours, Commando, Die Hard) on writing duties so you know it's going to be fun.

What I found amusing was that at first when Richards (Schwarzenegger) kills one of the stalkers, and then a second one, the audience is shocked to the point of silence. Nobody has ever killed a stalker before. Shit, even the host is at a loss for words. But then when it gets to a showdown between  himself and a third stalker (the opera singing Dynamo) and he has a chance to kill him as well, Richards doesn't because Dynamo is helpless and he doesn't kill helpless human beings, even scum like Dynamo as Richards simply puts it. But then the audience starts booing because now they want him to kill the stalkers. It was an interesting switch in the dynamic that happened rather quickly once Richards killed the first stalker.

As far as the stalkers and there particular weapons go, they're kinda cool, but completely impractical. But I don't feel like getting into why each weapon serves only one purpose for that individual but ultimately prevents them from being efficient as a stalker or a killer. Take Fireball for instance. He walks around with a huge flamethrower pack strapped to his back, and his hands have to constantly hold his flamethrower, which makes him pretty much useless for any kind of hand to hand combat or anything else for that matter. But whatever. He did look cool flying with that thing in his 70's superhero getup.

One of the few problems I had with this was that it didn't benefit from any kind of big finale. Yea, he kills the bad guy at the end, but he was a game show host in his 60's so there's not going to be any kind of one on one action there. Instead he shoots him down the pod shoot where he comes out the other end on fire crashing into a billboard which results in a huge explosion for no apparent reason. Gotta love the 80's and there unnecessary explosions.

I remember when this fist hit theaters it didn't do as well as some of his other films and was a sour note in his career for a brief time, until he made Last Action Hero in 1993. But this was much more fun and entertaining than I remember and not nearly as lame as I remember also, and really, what else can you ask for?
Posted by robotGEEK at 1:47 PM