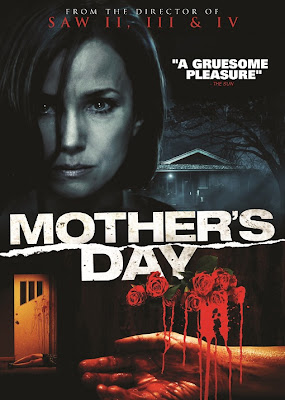 I've never seen the 1980 Troma original, so of course when I heard the director of Saw II, III and IV was doing a remake I assumed it was going to be in the same vein as that 80's horror classic, but I was mistaken.

Mother's Day (2010) plays out more like a thriller than anything, and that's perfectly fine unless you were expecting a full blown horror film. But whatever. It's not the end of the world and once I realized what kind of film this was actually going to be, roughly about 30 minutes in, then it wasn't so bad and Mother's Day (2010) has a lot to like once it's all over. Rebecca De Mornay most importantly. She's certainly played a villain before, but none quite like the character of Mother in this film. She's about as evil, cold, calculating and diabolical as they come, but then in the same breath she's sweet, warm and seems genuinely compassionate towards her hostages which only makes things worse because it's all a mindfuck. She knows how to get into your head, as she's done with her murdering, robbing and raping "boys". And that's the best part of Mother's Day. Seeing Rebecca De Mornay play an evil ice cold bitch, and then like the flip of a switch, seeing her become mothering, nurturing and caring within a split second.

The Koffin boys have just have just escaped a deal gone bad. When one of them is shot during the double cross, they decide to head to there old house where there mother resides, only to find out much too late that mother has lost the house to foreclosure and there are new tenants living there who just so happen to be throwing a party when the Koffin brothers show up. Angry and confused, they take the new tenants and there friends hostage and call there mother (De Mornay) who soon arrives and takes charge. What's supposed to be a quick and easy getaway soon becomes a nightmare for everyone involved.


In the realms of a suspense thriller, this had a lot of tension, really fucked up situations and a decent amount of violence. You don't get any "horror" film type of gore here, but director Darren Lynn Bousman doesn't shy away from the gratuitous nature of violence and at times even revels in it. I wish I could say he did a bangup job making this thing look slick and unique, but he doesn't. Bouseman has a directing style that you honestly couldn't differentiate from any other up and coming horror director. I guess that's not a bad thing, but if you're making movies, you certainly want to put your stamp on them. He's constantly working and making horror films, but you'd never say "That's a Darren Lynn Bousman film". He might get there one day, he just hasn't yet.

The cast here is all really good with a few recognizable character actors, but I can't say one single actor really stood out, except for De Mornay, because as an ensemble cast they all did pretty great and were effective. But this is De Mornay's show all the way.

Once you get out of the mindset that this isn't going to be a full on horror remake, you'll enjoy it much more for what it is, a well made and tense suspense thriller. The second half makes up for any shortcomings the first half might have, and the small twists and turns the creep up here and there offer a nice payoff to a film that ended up being slightly better than I was expecting it to be.
Posted by robotGEEK at 5:53 PM