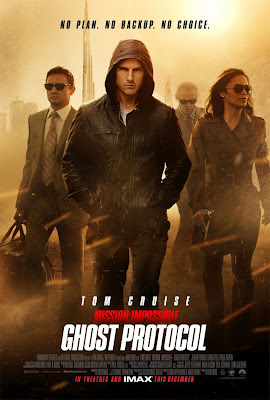 When I heard that Iron Giant and The Incredibles (two of my personal favorites) director would be making his first live action film with the 4th entry into the Mission: Impossible franchise, I honestly thought that was such an odd choice for his first live action film. In my mind I thought he certainly coulda picked a better film or franchise, one that better suited his specific talents as a storyteller and filmmaker. But wouldn't ya know it? Bird managed to deliver the best entry in the M:I films to date. The most action packed, the most thrilling, the most intense, the most stylish and the most entertaining.

I've always kinda sorta liked these films in the general sense. I don't love them (not until this one anyway), but always enjoyed them to a certain extent. I think what I liked most about them was that each new entry offered a different take than the previous offerings by the likes of directors Brian De Palma, John Woo, J.J. Abrams and now Brad Bird. I liked each one for specific reasons, but not all of them equally. I liked how De Palma's original played out more like a mystery or spy thriller. I liked how Woo offered up some striking, if outlandish visuals and I liked Abrams overall structure in part 3, though I didn't like his penchant for hand held quick edit camera work. It actually drove me nuts and I think I would have enjoyed it a hell of a lot more if it didn't give me such a damn headache. Structurally and storywise though, it was far better than parts 1 and 2. I just didn't dig the visuals.

I'm not even gonna attempt an in depth plot summary with this one because it would take me too long to try and put it simply and condensed. But basically, Ethan Hunt (Tom Cruise) is in a Russian prison. He's broken out by new agent Jane Carter (Paula Paxton) and old cohort Benji Dunn (Simon Pegg), who's now been upgraded to field agent. Along for the ride purely by accident is William Brandt (Jeremy Renner) who has a few secrets of his own and together they must stop a Swedish terrorist named Kurt Hendricks (Michael Nyqvist) from setting off a Russian nuclear weapon in the United States.


That's really the jist of it because the plot gets way more complicated than that with so many characters, villains and subplots that I had a hard time trying to keep up with who was who and who's side they were on from time to time. But whatever, it was a helluva ride literally right from it's opening frame to the closing credits. Director Bird and producer and star Cruise have put together one of the best action films I've seen in years thanks to some expertly staged and choreographed action sequences, stunts and special effects. Did I mention that it was equally hilarious too? Indeed, but not enough to take away from the vibe it's strongly been cemented in since the first film. It's still a M:I film, but surprisingly funnier than the three previous films. And while I'm mentioning Cruise, let me just say that the guy goes all out in this one. Say what you want about his strange antics from many years past in his personal life, but when it comes to work the guy works harder than anybody I've ever seen. You'd think this was his last film and he wanted to go out with one last hurrah. That's the amount of energy he puts in here and it's clearly evident on screen. The guy's just a certified badass and I'm glad to see him shine once again after a few lackluster offerings these past few years.

Bottom Line, M:I - Ghost Protocol is an insanely satisfying action film from beginning to end and the best entry in the series. You rarely get a chance to catch your breath or digest what's just happened as the next epic action sequence floors you even further.
Posted by robotGEEK at 2:53 PM