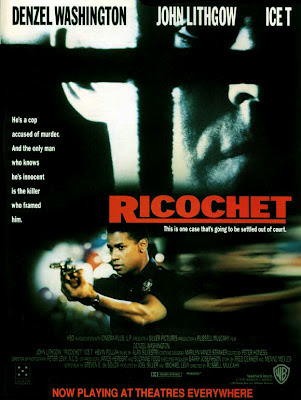 Richochet has everything that a lover of Badass Cinema could possibly want. 90's action cinema at it's finest, a hit or miss director momentarily showing a flash of genius, a legendary action cinema screenwriter reminding us why he was one of the best at what he does and the unlikely casting of John Lithgow as an exceedingly evil villain who can actually take down Jesse Ventura. Not once, but twice!

I hadn't seen this one in a long while, but always remember being struck by how visually striking it all was at the hands of original Highlander director Russell Mulcahey. But it wasn't until Jack over at Collected Cinema did an enthusiastic review on this in his "Forgotten" series that I finally got the push I needed to get off my ass and revisit this one again. You can check out that awesome review here.

Nick Styles (Denzel Washington) is a young LA Cop who happens to be at the right place at the right time when Earl Talbot Blake (John Lithgow) attempts to flee a drug deal where he's just murdered everybody in the room. During a tense negotiation, which just so happens to be caught on camera by a bystander with a camera, Styles shoots Blake in the knee with a gun hidden in his underwear all while Blake is holding a female hostage, eventually subduing him. Hailed for his heroic deed with footage of the incident all over the news, Styles is immediately upgraded to detective and eventually district attorney, all while Blake languishes in prison with only one thing on his mind, to seek revenge against the man who put him there, Nick Styles. After a daylight escape from prison, Blake begins a methodical scheme to ruin the district attorney's life and drive him over the edge until he's left publicly humiliated and desperate to the point of insanity.


So let's discuss the incredible talent behind the camera for a moment. I've always liked Russell Mulcahey as a director. He's had more misses than hits in his career and seems to never really stick with one definable style from one film to the next, but when he hits he hits big. For me, as much as I love the original Highlander, it's this film I admire most from his filmography. It's brilliantly directed with so much style that to this day I cannot believe that he directed both Ricochet "and" one of the worst films in his career, Highlander II: The Quickening in the same year. That's such an extreme parallel. In the same year he managed to direct both the best and worst film from his filmography with two completely different looks and styles that you'd never know they were made by the same guy unless you were a geek for this shit like I am.
But you've also got action producer extraordinaire Joel Silver on producing duties, 80's and 90's action god Steven E. De Souza on screenwriting duties and it's almost impossible not to figure out who did the score as it sounds almost identical to his score in Predator a few years earlier. I'm talking about Alan Silvestri. But hey, that's fine because it works amazingly well in this film adding just the right amount of tension to an already taut action thriller.

What makes Ricochet work so well is that all of these elements behind and in front of the camera work so damn well. It's one of those perfect examples of 80's and 90's Badass Cinema where all these elements came together at just the right time in the genre, much like Predator, Die Hard, Action Jackson and I Come in Peace did. I had such a blast with this one. It's an utterly ridiculous plot filled with completely ridiculous situations and circumstances but at the same time it's so much damn fun. You just can't take this stuff too seriously. But at the same time, how can you? We're supposed to believe that John Lithgow can physically take down Jesse "The Body" Ventura in two separate sequences. 'Nuff said.

The film's full of awesomely brilliant sequences and visuals. But one of the ones that stand out the most is a sequence inside of the prison Blake (Lithgow) has just been sent to. It's in what looks to be a kitchen and you hear someone yelling that if two inmates have a problem with each other, they fight it out. Only they tape books to there bodies for armor and use weight bars as swords. This was such a brilliantly executed sequence that mimicked almost to the exact camera angles the final fight between Macleod and The Kurgan. I mean, it was almost identical and I loved it.

Bottom line, you just can't go wrong with Ricochet. A sorely overlooked entry to the early 90's action thriller genre with the combined talents of De Souza, Silver and Mulcahey working on all cylinders. Since it's release, we've only ever had one DVD release, and it's not a very good one. It's never as clear as it should be and though it is in widescreen thankfully, it feels like it should look so much better. Here's to hoping that we eventually get a blu-ray release of this beauty some day. It totally deserves it.
Posted by robotGEEK at 7:43 PM