Review: The Legend of Drunken Master 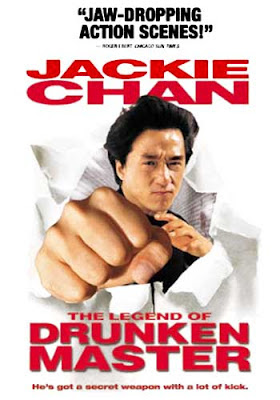 Legendary director Lau Kar-Leung brilliantly directs this Jackie Chan classic utilizing the widescreen aspect ratio to full effect. I mean, some of the visuals in here are simply breathtaking and flat out brilliant thanks to director Lau Kar-Leung's amazing ability to perfectly frame every single shot in gorgeous widescreen. I'm really surprised that it's not considered  one of Chan's better films in general because it has everything you could possibly want in an old school Jackie Chan film before he went all Hollywood on us. This is Jackie Chan in full on Jackie Chan mode with insane fight sequences, a collection of  International martial artists cast as the bad guys and the fearlessness Chan displayed in his career in the 80's and majority of the 90's.

I had only seen this once before, and I honestly can't remember where or when. I'm sure it was at a theater, but I think it must have been at the time when Miramax was buying the rights to these films and re-releasing them dubbed and in most cases edited. But in any case, I remember loving it and always remember the last part of this being one helluva badass and endless martial arts sequence with Chan's character getting drunk on gasoline or something and basically becoming invincible.

Wong Fei-hung (Jackie Chan) is unwittingly thrust into an international scheme to steal local and very valuable Chinese artifacts and import them around the world when a package in his possession is accidentally switched on train ride back home from market shopping trip. He also practices a type of martial arts called "Drunken Boxing", which his father forbids him to ever do and which also makes him very dangerous when fighting. It's up to Fei-hung and his friends to stop the black market merchants at all costs to protect his countries honor. Will he do this righteously? Or will he drink a few bottles of wine and revert to his remarkable Drunken Boxing abilities, which he has sworn he would never use again?


It's been a long while since I've seen a martial arts film this good, one that doesn't delve into fantasy or use an excessive amount of wire work. Sure, there's wire work in here, but it's used in a few situations where your not supposed to know they used wires, not like most of the marital arts films nowadays where the fight scenes always delve into fantasy or the ridiculous with martial artists actually flying and shit.

It was really great seeing director Lau Kar-Leung appear in this one as well. I tell you, for an old guy he can kick some serious ass. "And" direct a badass film at the same time. Quite an accomplishment if you ask me. I also have to give it up to Anita Mui. Though I can imagine that she can come off as annoying to a lot of people, I found her pretty funny in this one. The rest of the cast is pretty great in this too, each bringing there own individual talents to the table. Jackie Chan though was really fun to see. With all the crappy family friendly Hollywood movies he'd been making for the last 11 years, I often forget he was a badass and Legend of Drunken Master is a true testament to his immortal badassness.

I know this is supposed to be a sequel to Chan's other Drunken Master film from '78, but Miramax/Dimension films changed the name and I'm sure cut it severely as they often did with these imports. I will say though, the dubbing wasn't bad at all. And having Jackie Chan dub his own voice certainly helps. For a good ol' fashioned martial arts film with some classic Jackie Chan style stunts, you can't go wrong with Legend of Drunken Master.
Posted by robotGEEK at 4:12 PM