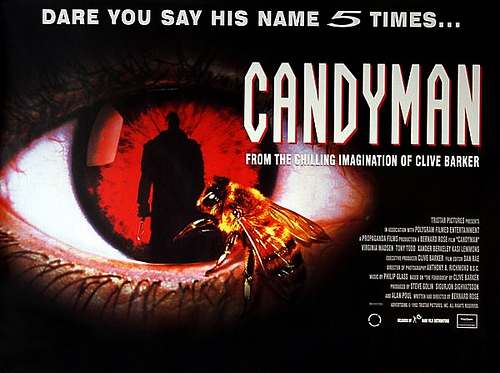 For me, Candyman represents a rare breed of horror film, the "mature" horror film. Or the "classy" horror film if you will, which is a rare film category they just don't make enough of these days anymore. Candyman is a good ol' fashioned "mature" horror film in the vein of Silence of the Lambs. And yea, under that category you could argue that The Silence of the Lambs "could" actually happen while Candyman cannot and therefore be considered fantasy. But I'm looking at them in general terms and compared to other horror or thrillers starting to come out around that time, these two films are a step above the norm. So before people start preaching, I'm not saying Candyman is another Silence of the Lambs (not by a longshot) and maybe not as good as that film, but definitely an adult horror film full of wit, style, substance and genuine chills that even 20 years later, I still hold in the highest regard. Plus, you gotta admit, it has an insane amount of badass one-liners that don't really make a lot of sense, but sound so cool rolling off the tongue. Maybe not as cool as when Tony Todd is spouting them, but cool nonetheless.

While based on a short story titled The Forbidden by horror master Clive Barker, I think a lot of what works about Candyman the film is due to the talents of writer/director Bernard Rose. Looking at his resume, you'd never think that he would be the guy behind a film of this genre, but he pulls it off splendidly and with such class that while it's not insanely awesome by any means, it's thoroughly enjoyable from beginning to end. And there are a few things that really help this one stand out. One would be that it was made in the early 90's, a time before the quick edit hand held lame-ass camera gimicks they use today. Rose films it straightforward with a minimalist touch which really only add to the overall effects of the story. Because essentially it's a film about an urban legend, which just so happens to be true, but had it been made today it would have turned into a completely different kind of film and mainly geared towards the young crowd starring some actress from the current 'hot" reality show or something. But that's not what Candyman is about. Thankfully, the version we got back in 1992 is about substance, not style.

Another huge contributing factor to Candyman's success is it's intensely Gothic score by Phillip Glass. It's eerily catchy, simple, effective and you won't stop humming that simple tune for days to come. That combined with Rose's strengths as a director and a haunting turn by character actor Tony Todd (a brilliant move in the casting department) in the role of Candyman and Virginia Madsen's no holds barred portrayal as the stubborn and feisty college student and the object of Candyman's desires.

As much as I liked it, there are a "lot" of things I still don't understand. Like why he's called Candyman. It's never explained and simply based on the story and how he became Candyman, you never get any logical answer as to why he chose that name. I mean, it'd be one thing if he only killed children by luring them with candy or some shit, but he seems to kill at random and candy never actually comes into the picture. And they say he only appears when you call his name 5 times, yet based on the legend and history of his crimes and killing spree, he seems to appear at will, often using the excuse that people are starting to not fear him anymore or not believe in him anymore, thus forcing him to appear and start killing just to prove that they should have something or someone to be scared of. So that was odd. Also, he's a spirit, ghost, demon, apparition or whatever you want to call him. He appears, disappears, has superhuman strength, superhuman abilities and all that. But there's a scene where Helen (Madsen) figures out where he resides and goes looking for him. She finds him and he's actually sleeping in this abandoned room, snoring the night away. Since when do ghosts or spirits sleep? Another odd creative choice.

But enough of the bitching. Candyman still kicks ass and while not actually being very scary per say, is eerie, moody with a haunting score and confidant direction by it's writer/director, emerging as an early 90's horror classic in my book.
Posted by robotGEEK at 9:23 PM