Geek news of the day - Zombie hits Blu-ray in October! 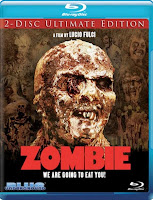 Blue Underground will release Lucio Fulci's ZOMBIE as a two-disc ultimate edition on Blu-ray on October 25. The new 2K high definition transfer came from the original uncut negative and the process was supervised by cinematographer Sergio Salvat. Both English and Italian audio track are included. The same version will also be available on DVD.


Here are the special features:
Disc 1:

Posted by robotGEEK at 6:54 AM