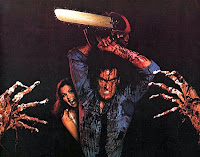 Confirmed!
As Bruce Campbell let it slip via Twitter yesterday about a scary as hell sequal to the classic The Evil Dead, Sam Raimi is confirming via his Ghost House Pictures that a remake is actually in the works and it is to be helmed by Fede Alvarez, who made that amazing short "Panic Attack".
Sam Raimi, Robert Tapert and Bruce Campbell will produce the full blown "remake" with Fede Alvarez directing and Diablo Cody doing a revision on the draft written by Alvarez and Rodo Sayagues.
Kinda sad to hear that it's a remake as opposed to an actual sequal, which would have made it Part 4. I still would have preferred Ash battling some demons, even at his current age. Ash don't age. But I'm also sure Alavarez will give us something pretty awesome. Just look at "panic attack" if you don't believe me.
Posted by robotGEEK at 7:27 AM