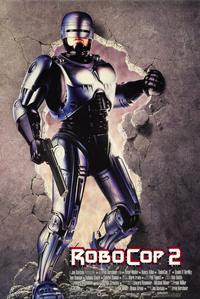 Robocop 2 was supposed to be the Empire Strikes Back of the Robocop franchise. After an amazing first entry in 1987 by director Paul Verhoeven, the studio lined up 2 men that were supposed to take this entry far beyond what we were offered in part 1. Director Irvin Kershner is known by geeks world wide for having directed the best entry in the Star Wars franchise with The Empire Strikes Back back in 1980, giving that movie the most emotion, depth and some of the most thrilling sequences out of any of the films. Screenwriter Frank Miller is an icon in the comic book world having been a fixture for many years beginning in the 70's, most notably for re-inventing the Daredevil title and for writing and illustrating one of the best graphic novels ever produced, The Dark Knight Returns as well as other notable works like 300, Sin City, Big Guy and Rusty the Boy Robot, Hard Boiled, Ronin and Elektra, many of which I personally still own. Along with these titles he also wrote a Robocop comic series in 2003 called Frank Miller's Robocop which his "original" unfilmable script was based on and later released in a collection in graphic novel form which was drawn by the incredible Juan Jose Ryp. This is what Robocop 2 was supposed to be like. If you ever get a chance to get your hands on this graphic novel I strongly urge it as it's one of the best, most violent and utterly insane comics I've ever read and I can only imagine what this movie would have been like. You see little bits and pieces of it in the final movie, but its still nothing like what Miller had envisioned. Thank the studio for that.

Back to Robocop 2. The combination of talent seemed like a match made in heaven, a movie lovers dream. I mean, how could you go wrong? The director of The Empire Strikes Back and the writer and The Dark Knight Returns! Unfortunately the powers that be, as much as they loved Miller's script, felt that it was impossible to film, especially on a budget. Drastically rewritten and downsized it's barely a glimmer of what Frank Miller had envisioned for Robocop 2.

What we're ultimately left with is a good movie, but not a great movie. You just can't help but feel as your watching it that something's...........off. Somehow in someway it just doesn't mesh well, but you can't put your finger on it. It's certainly entertaining to a degree. It's got some pretty badass action sequences, we've got all the principle players from the 1st one and a new villain in the form of Cain, here played by Tom Noonan. Cain is actually a bore as far as villains go, and it's only after he's almost killed in that truck/motorcycle accident with Robocop and ultimately turned into the new Robocop 2 by OCP that things kick off. It's got some cool set pieces, and the stop motion effects are pretty impressive. Still, somethings missing. The script tries it's hardest to duplicate the insane world we live in during the 1st film with those ridiculous futuristic commercials and news reports. The world were shown in the second one is a little more gritty and darker this time around where even kids run around with sub machine guns running drugs. I also think a lot of people were turned off by the whole notion of changing Robo's prime directives to more people friendly directives. This is all due to Dr. Jaxx against everyone's complaints. Instead of using violence, he resorts to motivational speeches and it was kinda ridiculous and left a bad taste in your mouth. It was like he was doing a parody of him/itself and it just didn't jive in a Robocop flick. I guess it was a little funny, but that's not what I went to the theater to see. I wanted to see Robocop bust some heads and kick some ass, not deliver a speech about littering. 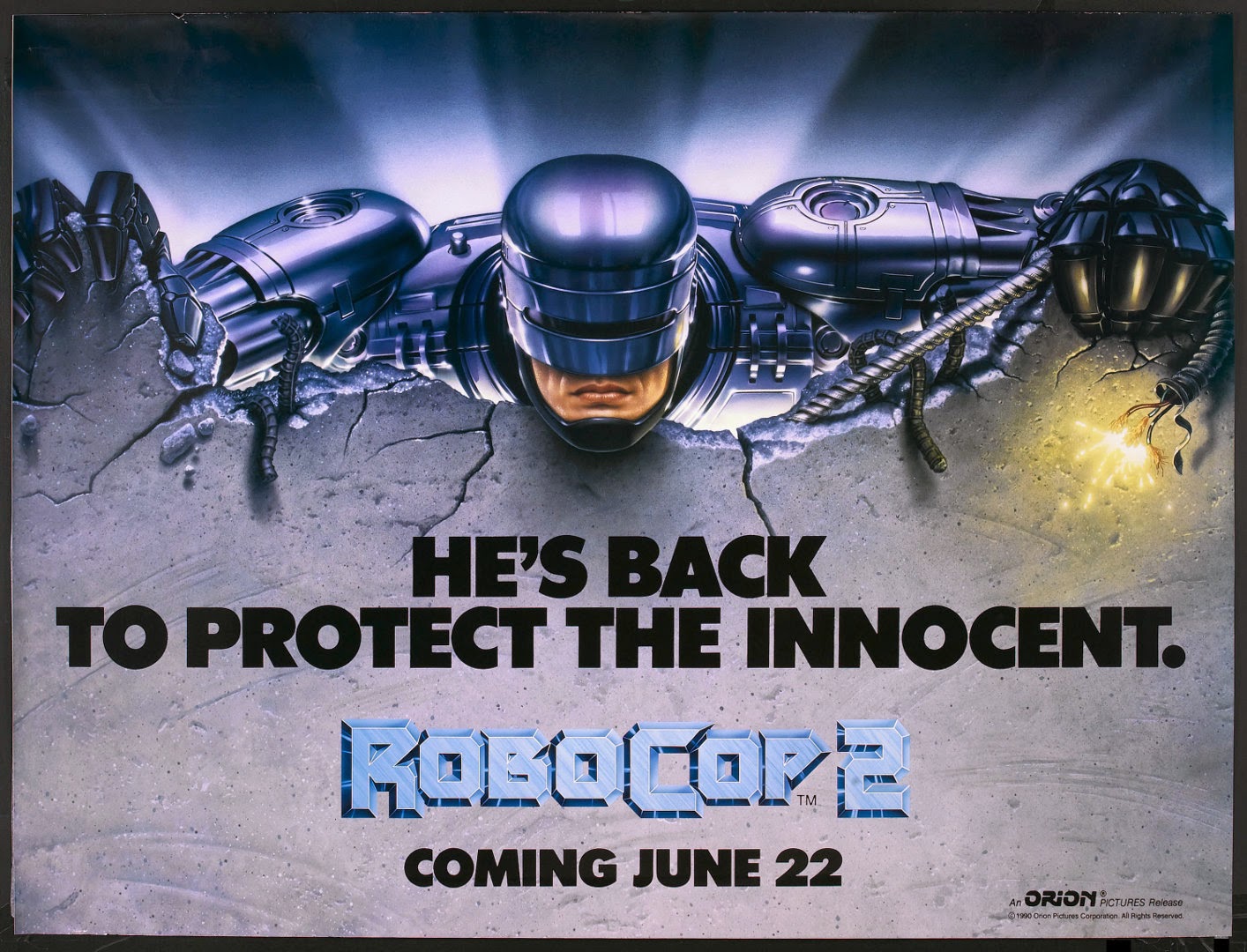 Plot:
There's a new drug on the streets called nuke. It's so addicting that people will kill for it, literally as were shown on live TV during a scene on a news broadcast in the beginning of the film. Nuke is the product of one man named Cain, who's goal is to run Old Detroit as the drug kingpin he see's himself being. Officer's are on strike, which leaves a lot of the police work to Robocop and his partner officer Lewis. In the meantime, OCP is trying desperately to duplicate the success of the first Robocop, but to drastic results. One after another the new Robocop prototypes crash and burn. Enter Dr. Faxx, a new member of OCP's team and one who takes matters into her own hands and quickly sleeps her way to the top. When they're given a new specimen in the form of Cain, who's been nearly killed by Robocop, she thinks his brain is just the type of psychotic needed to finally get the new Robocop 2 off the ground. Once he's turned into this robot, he's an unstoppable killing machine powered ironically by the drug Nuke, which Dr. Faxx uses to entice her new subject to perform certain tasks.

The first Robocop is still considered one of the genre defining action sci-fi flicks of the last 30 years. Immediately when you ask someone what the best sci-fi action flicks are of the last 30 years, they almost all hail from the 1980's with films like Robocop, Aliens, Escape from New York, Predator, They Live and The Empire Strikes Back. Robocop seemed to come out of nowhere directed by a guy nobody ever heard of. Ultimately, he was the best choice. Who knows what kind of Robocop we would have ended up getting had someone else helmed the original other than Paul Verheoven. This guy is an incredible tour de force who when given the right sci-fi material never fails to deliver the goods. His other 2 sci-fi flicks, Total Recall and Starship Troopers can attest to that. I refuse to consider Hollow Man as science fiction as it plays more like a thriller than anything else. But something is seriously lacking here. It definitely was cool seeing Robocop fight another robot this time around as opposed to just a crazy ass bad guy. And I will say though that it was pretty badass seeing Robo ride around on a motorcycle. That was a cool sequence. And the last quarter of the movie when Robo fights Robo 2 was impressively done considering it's all stop motion and miniatures. 1990 was an interesting year for movies. A lot of my favorites came out this year and it was one of the last years where miniatures was the standard with effects. Total Recall was another, coincidentally helmed by the first Robocop director Paul Verheoven and that film implored a ton of miniature and model work before CGI started taking over.
But ultimately director Irvin Kershner can't live up to the ultra-violent world Paul Verheoven created in the first one. It's a shame too because this is the last movie he ever directed. The blame can't lay solely on him though. Some of the choices in the script didn't leave him much room to deliver something remarkable. Frank Miller had great ambition with this franchise, but in 1990 it was just not possible. I think his concept of Robocop was just too far ahead of it's time.
Hey it could work now because we've certainly advanced enough with technology to achieve it. I mean, look at Watchmen. They always called that graphic novel unfilmable also. But they did it and I believe if given to the right director, the Robocop sequel we all wanted could come to fruition.

Don't get me wrong, I really dig this flick. In fact, it's one of those I throw in at least once a year. It's got a dry wit and a lot of action. But what you end up seeing more is screenwriter Walon Greens script than Frank Miller's in the final product, which is a shame. But it's fun and severely underrated. It got a bad wrap and was pretty big disappointment at the box office. It's right up there with Predator 2, which came out the same year, along the lines of good but not as good as the original in the action sci-fi sequel category. It's definitely worth your time, if you can get past a lot of the silliness of the script. Just promise me you'll forget the PG-13 Robocop 3 and see this instead whenever you need a Robocop fix when you've worn out your Robocop 1 DVD or Blu-ray.
Posted by robotGEEK at 9:40 AM