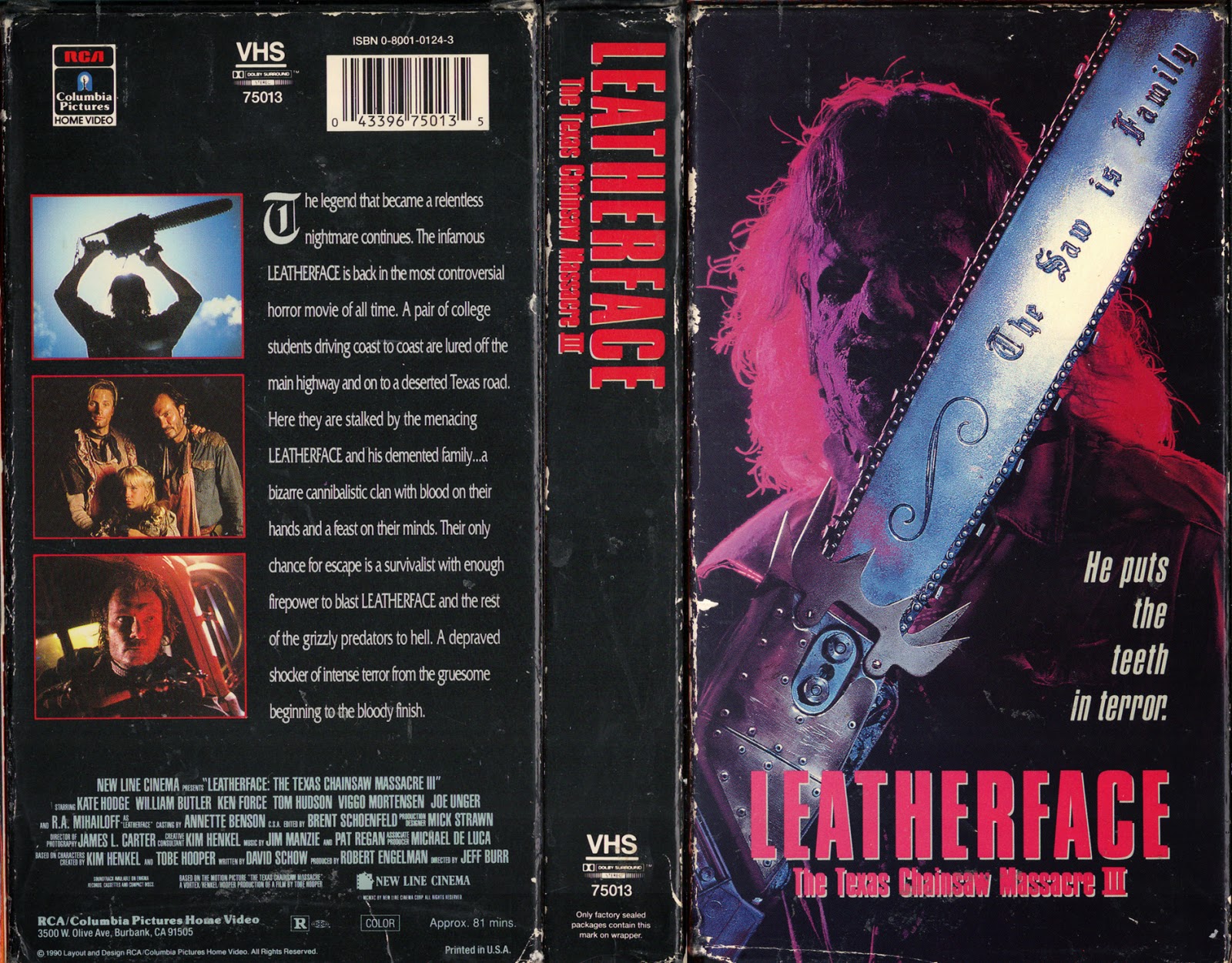 TCM3 has always had a bad rap. And I'll agree, it's definitely the most tame out of the series. But I've always enjoyed it and don't think it's as horrible as most people say it is. Yea, the gore is almost non-existent, but if you remember, neither was the original. The original is terrifying because it almost looks like a documentary. And there was blood, but very little. What you had instead was a whole lot of screaming, creative camera work and a realism that sent chills down your spine.

TCM3 is famous for many reasons, most notably for the extensive cuts that were forced upon it for it to receive an R rating from the MPAA back in 1990. I lost count how many times director Jeff Burr said they submitted this film for a rating after extensive edits and cuts and time after time coming back with the dreaded X-Rating. Originally there was a lot of gore in this thing. They actually filmed a lot of these violent gory sequences with wonderful f/x work by the masters Kurtzman, Berger and Nicotero. But these scenes never saw the light of day and to this day it doesn't look like they ever will. Even the so-called "Unrated" version is a joke. There's maybe 3 scenes that I noticed were new, but nothing to get excited about and definitely nothing to justify the title "Unrated". All the scenes where they're about to show something horrific and then suddenly cut away right before it happens are exactly the same. Bah! And I just don't get it. Why would a studio finance a film called The Texas Chainsaw "Massacre" and not want it to be violent, disturbing and gory? That makes absolutely no sense to me, especially considering the kind of film part 2 was where it was actually released Unrated in the theaters in 1986. It's a movie about a chainsaw wielding psycho who butchers people without hesitation so that he can eat them. What is the thought process in making a horror film like this but cutting all the gore out. Blasphemy!

A lot of people trash this entry, just as much as they trashed part 2 for being too silly and ridiculous, even a little funny. So you just can't make everyone happy. And another thing people whine about is the fact that this one seems to have no relation to the first two, other than the fact that it has Leatherface. But that's true with all of them. The only single constant in any of them is Leatherface, which is fine! Make them all different if you want, just make them good!
In TCM3 he seems to have a new adopted family. I think that little girl is even his daughter! Though grandpa is still there, which doesn't make any sense at all if you think about it. But I think it was more of a sight gag than anything else. Of course they're all cannibals still, so they kill for meat. Director Jeff Burr was faced with relentless obstacles while making this, and considering the hell he went through during and after production, I think he should be commended because though the studio cut almost "all" of the gore out, the film looks good and it's probably his best looking film from his filmography to date.
Leatherface looks badass too. A little different from the curly haired fat slob of part 1 and 2, as he looks taller, more muscular and with long straight hair here. And that chainsaw............brilliant. Completely impractical as it weighs 80 pounds and looks longer than him, but fucking brilliant to look at. Remember the teaser trailer with the Excalibur theme? That teaser trailer will probably go down in filmgeek history as being one of the most ridiculous, but also the most awesome horror movie trailer ever! I've included it below for your amusement.

I don't know, I think 1990 was just a tough year for horror films because it almost seems like this film had all it's cards stacked against it before they even started filming. Director Jeff Burr, who was at the end of a long list of possible directors, was obligated to deliver an R rating so that the film could be profitable. And I think the committee on the MPAA board must have been anti-horror or something because even the deleted scenes and gore sequences they filmed that were eventually edited out would actually be fine in this day and age. You see these scenes and say to yourself "I've seen worse on True Blood!". And it really is that bad in this. It's a good movie, but it doesn't have a lot of scares. It's a slow burn first half as it tries to build a plot and does offer a few sequences of tension, namely that "tire changing" sequence. But when Leatherface finally shows up and starts wielding his chainsaw it's all very brief and extremely tame. Every single time when something is about to happen like when he's got someone trapped on the ground and his chainsaw is coming down right on his victim, like the very split second before, the scene cuts to something else and it drives you nuts. And when the scene cuts, you hear hear him cutting up his victim with the infamous sound of blood splattering. And that's another problem. This film is not consistent in the least. For example, this sequence I just described. You clearly hear him butchering up this poor guy and you hear him screaming and yelling for his life as the sound of blood and guts is heard for a good 10 to 15 seconds. But when they bring this guy inside to hang him upside down to cut him up, he has no damage to his body! He has a bloody nose and mouth, but that's it! And when Leatherface is fighting Benny in the swamp in the finale with his chainsaw apparently running on it's own without anyone holding the trigger in the lake when it should have sank immediately because of it's weight, you clearly see him almost cut Benny's head in half, holding his head against the blade of the chainsaw for a good long while. And you know Leatherface doesn't do anything half-assed. If he's killing you, he's gonna make sure you dead for christ's sakes! But guess what, Benny conveniently appears outta nowhere saving Michelle yet again at the very end with just a scratch on his head! A completely ridiculous ending for sure, and one that they apparently filmed after test audiences didn't like the original ending where Benny died. And since were on the topic of ridiculous. The same swamp sequence where Benny "supposedly" dies is also the same scene where Leatherface "supposedly" dies. But it's soooooo lame! After all the buildup to the final death scene, Michelle hits him over the head with a rock and he sinks. That's how he dies. But guess what!? He shows up too right after Benny magically shows up and he's still alive too! What an ending! But wait! The DVD offers the "alternate" ending and it's so much better. First off, we see Benny's head actually get cut in half. Second, Tex re-appears after being cooked alive and tries one more go at trying to kill Michelle before she sets one of there own booby traps on him and kills him for good. Third, in the final sequence when Michelle is walking in the desert, everyone doesn't miraculously come back to life. Instead it's a slightly different ending and one that works much better for this kind of film.

But you know what? Despite it's flaws like logic, consistency and complete lack of gore it's still heaps above the dreadful sequel after this one, 1994's The Texas Chainsaw Massacre: The Next Generation. Horrible, completely horrible and unwatchable and I'm shocked they had the balls to continue with the franchise after that entry. I guess that's why it took 9 years for the remake to come out.

While considered by many to be "not very good", I beg to differ. It's oozing with style and suspense, wrapped in a dark tone that was hard to match back in 1990. R.A. Mihailoff made a great Leatherface, and though the gore is severely lacking, the execution is convincing and I think it all pays off nicely. I love this film despite it's flaws, and hope that one day we'll get a "real" Uncut version some day. In the meantime, enjoy the trailer. It's insanely brilliant.
Posted by robotGEEK at 5:50 PM