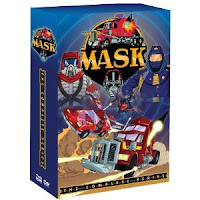 Oh man! I used to watch this one every day after school in the mid 80's. This is one of my absolute favorite animated series ever and unfortunately hasn't been available on DVD until now. On August 9th Shout! Factory will release a 12 disc set of the "complete" series of this animated classic on DVD. "Complete" as stated on the box set is a little misleading as this box set only contains the 65 episodes from the 1st season and not the 10 from the 2nd. In season 2 they completely changed the format of the series by making it more of a racing show as opposed to the G.I. Joe vibe from the 1st season and only offering 10 episodes as opposed to the 65 from season 1. Those 10 episodes are not included in this box set and may very well never be. Which is fine because season 1 is the season that ruled.

If you don't remember or hadn't even been born then M.A.S.K., which stands for Mobile Armored Strike Kommand, was an animated show that ran from 1985-1986 about a crime fighting group led by Matt Trakker who fought the evil villains of V.E.N.O.M., or Vicious Evil Network Of Mayhem, led by Miles Mayhem. Both M.A.S.K. and V.E.N.O.M. rode awesome vehicles that would transform into other objects like helicopters, flying cars and whatnot. It was a really fun action packed weekly afternoon show that ran along with Thundercats, Transformers and G.I. Joe in the mid 80's and was animated surprisingly well.
That theme song is so choice.
Posted by robotGEEK at 9:57 AM