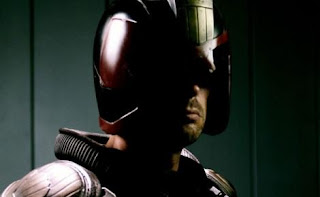 A new image of Karl Urban as Judge Dredd in the currently in production film has just appeared online and I'm liking what I see.
This new version simply titled "Dredd" is supposed to be a more darker, grittier and more faithful adaption of the legendary comic character than the 1995 Stallone starring version, a much watered down version of the character but still a version I still happen to love very much.
Hopefully this will be the Judge Dredd film we've all been waiting for. After 33 years this character is due for a proper big screen treatment.
This film will be written by 28 Days Later writer Alex Garland and directed by Vantage Point's PeteTravis.
Judge Dredd is currently filming in Johannesburg in 3D. An official release date has yet to be announced. Can't wait!
Posted by robotGEEK at 10:12 PM