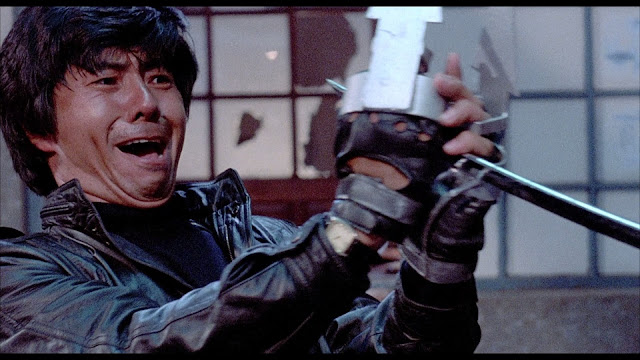 As I'm knee-deep into my ninja and Sho Kosugi fix, this little seen and often forgotten entry from his 80's output popped up on my radar after gleefully rediscovering the masterpiece that is Pray for Death. Naturally it was a no-brainer that I would immediately grab this one as well. And as luck would have it, just like with Pray for Death, Rage of Honor got a snazzy Blu-Ray release back in 2017 courtesy of Arrow Films. Let's dig in.

Re-teaming with his Pray for Death director Gordon Hessler, Sho Kosugi attempts to take a somewhat detour from his typical ninja fare by making this more of a secret agent style film where he plays a DEA agent who's partner is killed by a sadistic drug-lord, whom he chases all the way to Argentina for revenge after quitting the force. 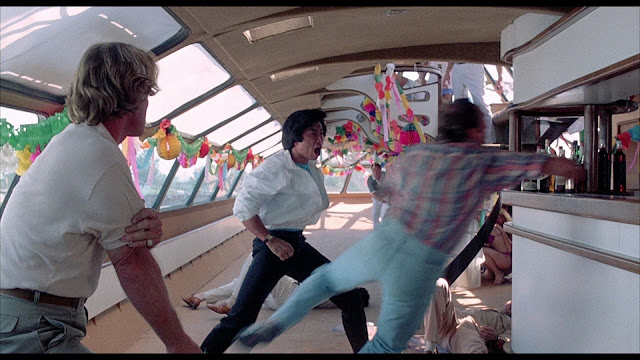 Rage of Honor tries really hard to distinguish itself from the ninja craze that Sho Kosugi himself made so popular as "the" defining face of the ninja in the 80's by making it more of an espionage/agent action film. But try as it might, in the end it ultimately becomes a ninja film without the term "ninja" ever being uttered. It's true. About halfway through the film our protagonist Shiro (Sho Kosugi) pretty much gives up the "I'm not a ninja" charade and utilizes his ninja skills (which are never explained or mentioned) to track down the drug kingpin responsible for his partner's murder. Once in Argentina he's constantly confronted by this evil kingpin's army of ninja's (again, never explained why there are so many ninjas in Argentina of all places), which gives Shiro plenty of opportunities to prove who is in fact the best ninja of all.

Does it sound like I'm complaining? I hope not, because the reality is that these are the reasons that make Rage of Honor so great. While not necessarily in the same league of cheesy-awesome as his previous film Pray for Death, it's every bit as entertaining, just in a more polished way as opposed to Pray for Death's highly amateurish aesthetic. Which is surprising considering they're both directed by German born Gordon Hessler. These two films couldn't be anymore different visually, and that could be attributed to either his Cinematographer's or the fact that he grew substantially as a director since their last collaboration. That's not to say Rage of Honor is not without it's share of unintentionally hilarious or plain cheesy moments, because it has a lot of both. And much like Pray for Death, is one of it's most endearing qualities and makes it so special. 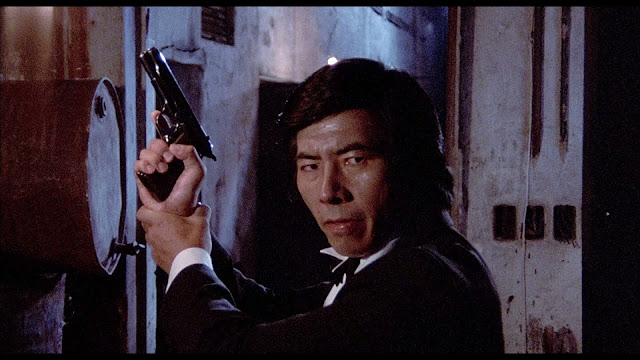 I have to be honest here. I love Sho Kosugi. He was a huge part of my childhood growing up in the 80's knee-deep into action and ninja films. But, he is not the best actor. And you know, he will even admit that. In his new interviews, he states several times he's not an actor, but a performer. His real strength is performing the physical stuff. And it shows. Here he is given a lot more lines to deliver compared to several of his previous films, and unless you watch it with subtitles, you really can't make out most of what he says. But I'm not complaining. The same thing happened to Jackie Chan in the excellent The Protector. His attempt at English was oftentimes painful and hard to understand unless you used subtitles, and it's the same thing here. But hey, they both deliver where it counts and that's in the fights and action, and boy does Kosugi kick a whole lot of ass in this one, especially in the second half when he travels to Argentina and literally takes on an entire drug cartel, which, randomly and surprisingly consists of ninjas.......in Argentina. You just gotta love 80's action films. They really were the best.

Kosugi explains in a new interview that his manager convinced him to step away from the ninja genre because it had been done to death, and urged Kosugi to explore other things, hence the change in this film where he tries to take a short step outside of the ninja genre. He openly regrets that decision because he feels if it was his thing and he was good at it, he should have rode that wave a little longer, because ultimately, this would mark the last big starring role for him in a big film. He would only co-star in a few films shortly after before retiring in 1994, only to be coaxed out of retirement for Ninja Assassin in 2009, where he played the villain. It's been 9 long years since then and he's stayed away from film and television since then. Though he still trains 3 hours every single day, and has a ninja epic with his son planned on the horizon. I hope that actually happens. 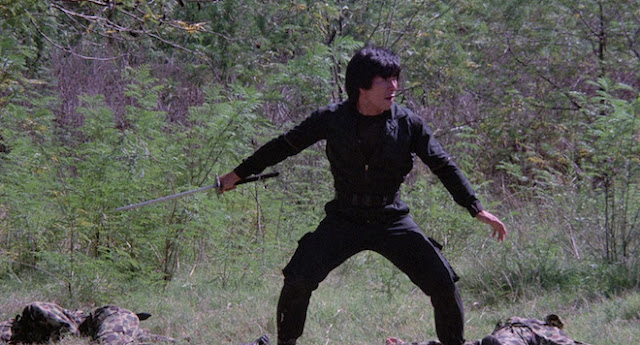 Rage of Honor is a badass and fitting sendoff to a legend in an era where he reigned supreme as the ultimate ninja badass. He may not have sustained that legendary status past the 80's, but man did he deliver some incredible films while he was in his prime. In any case, we'll always have these gems to look back on. 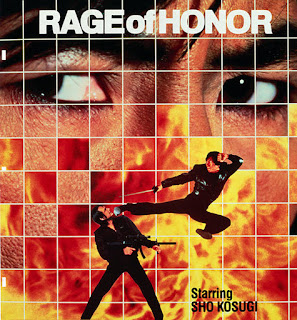 How to see it:
Like with their Blu-Ray release of Pray for Death, Arrow Films gave this one a solid Blu release with a great new widescreen transfer and a few extras. The best Special Feature being Part 2 of a brand new interview with Sho Kosugi himself called "Sho & Tell", where he discusses his life in and out of the film industry and his experiences making Rage of Honor.

Honestly and personally speaking, this interview alone is worth the price of this new release, which is surprisingly cheap for usually under $20. The transfer is incredible, and you also get a collection of trailers for other Sho Kosugi classics as well as a few fun extras. Grab it and add it to the collection! It's a Badass Cinema essential!

Posted by robotGEEK at 1:51 PM