Here's the second entry in my "80's Action" line. I have to say, I'm really happy with how the cardback turned out on this one. Probably my favorite one so far. For the figure I used 2 different ReAction figures. But like I've said before, I have more fun working on the cardback design and packaging than the actual figure. Now if only I could convince someone to make the figures for me so I can just concentrate on the cards. LOL. 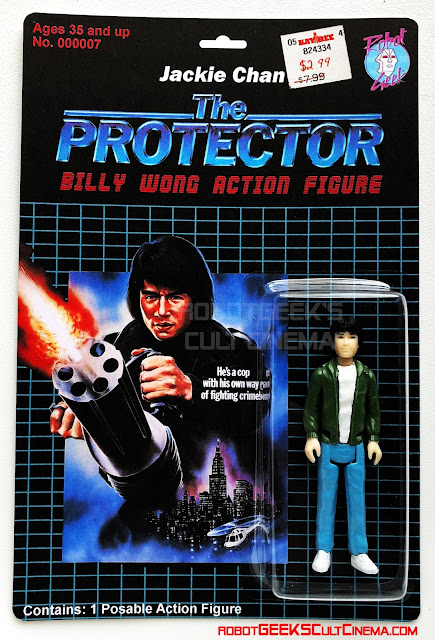 Being as Billy Wong (Jackie Chan) changes clothes a ridiculous amount of times in this movie, it was really hard to pick an outfit that would standout as the most iconic from the film. So I chose to go with the getup he wore in the last act, where he fights Bill Wallace. So basically,. it was light colored jeans, white sneakers, a white t-shirt and an olive green jacket.

The Protector has quickly become one of my new favorite movies. Everything about it is just so badass and despite it's reputation as being a box office dud during it's initial release, looking at it today only makes it all the more impressive. While not a straight-up martial arts film (which is why people just didn't connect with it initially), it still has plenty of that in here, along with some excellent action sequences and a killer 80's retro vibe that makes it all the more special. If you haven't seen it in a while, or ever, please I implore you to pick up the cheap Blu-Ray 2-Pk of this and Chan's Crime Story from Shout! Factory. It's a helluva fun ride.

Be sure to check out my review 'The Protector: One of the Best Movies You Never Saw' Here.