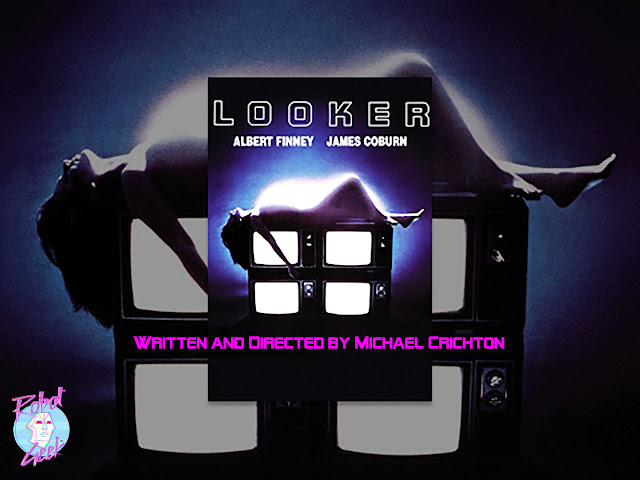 If Looks Could Kill...

When I recently posted about Michael Crichton's excellent and insanely underrated 80's thriller Runaway in a film group, it got a huge response by those who also loved it. In that same thread, someone mentioned this often overlooked thriller, saying that it was just as good and much like Runaway, also highly underrated. As luck would have it, I had just gotten it in the mail from Netflix that very week, making for a serendipitous moment. With this member's glowing recommendation, I decided to throw this on the very top of my "Watch Pile", so I could get to it soon. On that following Sunday afternoon I did just that. Let's dig in.

Looker is a film I remember playing on HBO a whole lot back in the early to mid 80's. In fact, it was one of those famous PG-Rated films that still had a surprising amount of nudity, making it an essential for a young guy growing up. Aahh, gotta love those 80's PG boobs! So I know I've seen it, but I don't remember a thing about it other than there being some sort of rad gun that did something unusual. Not surprisingly, the only thing I took away from this movie as a kid was the frequent nudity. But moving on. 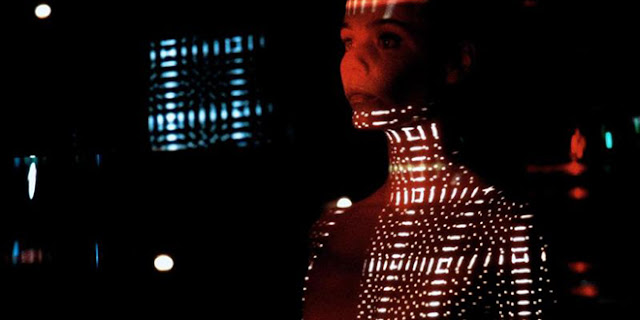 One of the few films written and directed by Michael Crichton that wasn't based on one of his books, Looker is a sleek techno-noir thriller about a plastic surgeon (Albert Finney), who's patients are mysteriously dying at an alarming rate. When he decides to do some investigating, he discovers that they're all models tied to a company called Digital Matrix, who's clients are models seeking perfection. Soon Dr. Larry Roberts uncovers a scheme where models are being murdered, and he too is next on the list.

Looker is quite possibly a near perfect 80's thriller. The fact that it's not more well-known or loved just blows my mind. Crichton, fresh off the heels of Westworld and The Great Train Robbery, delivers a slick tech-noir thriller about technology, in a way that nobody had done before. Much like with his excellent Runaway, Crichton was able to predict real-world technology that was purely science fiction at the time, but would become a reality in the future. I won't spoil it for you here, but when or if you watch it, you'll know what I mean.

Crichton will never be known as a visual filmmaker. While most of his films all share some sort of common bond, like technology for example, he's never been one to infuse his films with an overabundance of visual eye candy. And that's one of my biggest issues with Runaway. As much as I love that movie, it's always bothered me that he sort of lazily shot that using handheld camerawork. But if there was any film that would push Crichton's limits and his ability to produce some beautiful images, it's Looker, which, in my opinion, just may be his most visually impressive film in his entire filmography. With the help of cinematographer Paul Lohmann, Crichton produces some incredibly impressive images, highlighting the late 70's/early 80's look and feel to great effect (i.e. the excellent fashions and decor), while also giving us some fantastic moments whenever the "tech" stuff came into play, like the computer sequences later in the film, or the "freeze gun" moments.

I think one of the strongest aspects of the film, aside from Crichton's slick direction and smart script, are the performances, namely Albert Finney, here as the plastic surgeon with a conscience. Unlike the typical route this characterization could have taken, Dr. Larry Roberts (Finney) cares about his patients mental well-being, and keeps a code of conduct by never dating his patients, even when they throw themselves at him. The Partridge Family and L.A. Law's Susan Dey does a fantastic job as free-spirited and flirty model whom Roberts vows to protect, and the rest of the cast is rounded out with some excellent character actors, most of whom you'll surely recognize.

Looker isn't a game-changer, but it does everything right in offering up ample amounts of tension, suspense and thrills, complete with a smart script, fantastic visuals and a time period that conveys fashion, art and decor in a very hyper-stylized glamorous way via the very early 80's. It's a fun time and a must-watch if you enjoy a great thriller.

How to see it:
Sadly, there's no Blu-Ray of this yet. But you can pick up the DVD for roughly $10 from any number of online retailers. Here's to hoping it will get the Blu-Ray treatment someday soon. But I will say, the DVD quality isn't bad at all.

Posted by robotGEEK at 1:38 PM