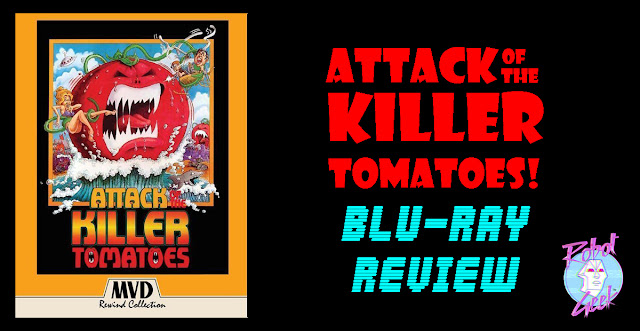 "One of the Five Best Movie Titles of All Time!"
~ USA Today

Does this legendary cult classic really need an introduction? If you're reading this, chances are that you've already seen this, because honestly, who hasn't? It's a classic! And it has every right to be. What began as a short film in 1976 that then became a full length feature 2 years later in 1978, would ultimately create a franchise and spawn 3 sequels throughout the 80's and 90's. A beloved franchise I might add. One that, despite it's utterly ridiculous concept, has a fan base that continues to grow and grow, which brings us to this brand new 4K restoration courtesy of MVD Entertainment.

This new 2-Disc release, with a killer new transfer also boasts an insane amount of extra content for the die-hard Tomatoes! fans to dig into that includes new commentary, interviews, deleted scenes and in-depth discussions (some of them serious, others tongue-in-cheek) about various aspects of the films production, legacy and cult status. Let's dig in.


MVD Entertainment did a bang-up job on this release, and they're slowly making a name for themselves in the Cult Cinema on Blu-Ray movement. In fact, they have a brand new Lionheart Blu-Ray release coming soon that I'm really excited about.

The extra content, most of them surprisingly short (good thing there's a lot of them), are a hoot to dig through and very fun. One of the best things about them is listening to writer/director John DeBello, who wrote and directed all of the Killer Tomatoes! movies, discuss his experiences and some fun trivia regarding all things Killer Tomatoes!. You also get his original short that inspired the full-length feature as well as a retro style slipcover and poster. The transfer itself is incredible, bringing out the bold colors of the 70's in all their grainy glory. Attack of the Killer Tomatoes! has never, ever looked this good.

Attack of the Killer Tomatoes! is available now wherever Blu-Rays are sold and from any of your favorite online retailers for an average price point of $20-$30, depending on the retailer. Regardless, it's a Must-Buy. No doubt.