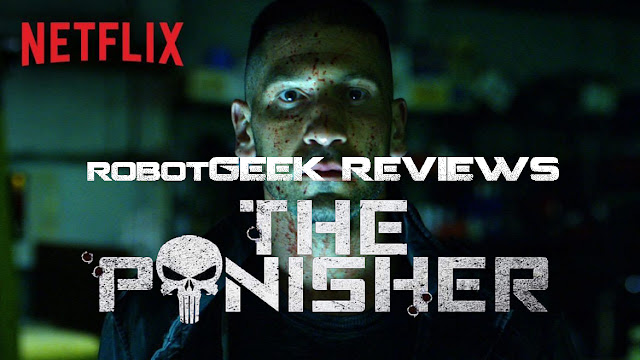 My History With The Punisher: 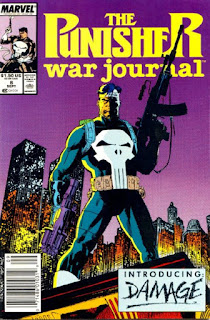 The character of The Punisher has been my all-time favorite comic book character ever since I discovered him at 13 back in 1989. Brought to exquisite life by legendary artists such as Jim Lee and Mike Zeck, along with writer Carl Potts, the most significant titles that shaped the character into what he has become, and the two titles that I still cherish to this day revolving around this character are The Punisher War Journal (Jim Lee) and Return to Big Nothing (Mike Zeck). Ever since then, I've been a Die-Hard fan, collecting nearly every title he carried and ever random issue of other titles he would guest-star in from Spider-Man to Daredevil. If The Punisher appeared in it, I would buy it. In fact, I still own many of these first original issues, which are stored away in a few comic boxes in the back corner of a closet.

The Punisher would eventually go on to have a wide variety of solo titles including the aptly titled The Punisher, as well as a plethora of one-shots, graphic novels, The Punisher Magazine, mini-series and a few short-lived series such as The Punisher: Armory.

But it wasn't just Lee and Zeck that made this character so popular. While Carl Potts is the main man who did so much of the writing that shaped the character, the sort of "voice" of the character, other artists such as Joe Jusko and John Romita Jr. are equally responsible for giving him life through his "look". The 80's and 90's were really the defining era for the character, and while he would go onto different titles and iterations, most notably The Punisher MAX (2004-2009) series by Garth Ennis, which would reach a whole new legion of fans in this darkly gritty and more realistic interpretation, it's really the 80's/90's era that shaped the character into what he has become. 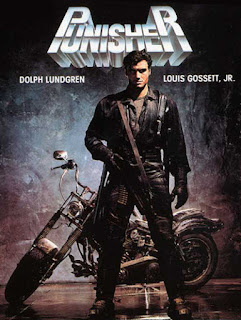 Back in 1988-1989 when it was announced that Marvel and New World Pictures would be teaming up together for the characters very first film adaptation, I was over the moon. Here, of all the comic characters to adapt at their disposal, they decided to start with this little known and less popular cult character figure, which was music to my ears. The fact that it starred none other than Dolph Lundgren as the titular character was really just icing on the cake for me. I loved Dolph (who am I kidding? I still do!), and though the film had a troubled history getting released here in the U.S., it did end up hitting the home video market with very little success or fanfare. Still, it's reputation has grown considerably throughout the years and has remained a true cult classic. While it may not be considered a definitive Punisher film (Punisher: War Zone better fits that bill), just as a low-budget action film starring the legendary Dolph Lundgren and containing arguably one of the largest "kill counts" in cinematic history, it's quite the excellent slice of Badass Cinema, and my personal favorite Punisher film to date. Shit, it's one of my all-time favorite films ever. Period.

With that being said, there have so far been 3 different attempts to bring this character to the screen, with none of them doing well enough to satisfy the die-hard fans, and none of them getting the character right 100% either. But of course we all know that's part of the game, that studio's and directors will take liberties with the material to make it more......cinematically friendly. It had been almost 10 years since the character of The Punisher had been adapted to the screen in any format (The last being 2008's Punisher: War Zone), and Marvel chose wisely to introduce him back into our consciousness with the 2016 release of Season 2 of the Netflix/Marvel series Daredevil, arguably the best season to date. The Punisher/Frank Castle, here played by The Walking Dead's Jon Bernthal, drew instant criticism "initially" before they even saw him play the part. And I'll admit, I was one of those people who just didn't see him in the role. Yet all my fears were put to rest once I saw him tear up the screen in all his bloody glory as the vengeful character that became one of the most memorable characters on TV in many, many years. His character, and most importantly, Bernthal's performance, was instantly a fan favorite and his own spinoff series was immediately greenlit by Marvel and Netflix for a November 17, 2017 premiere. 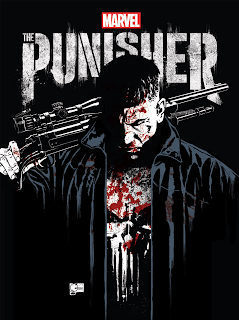 I, which is no surprise if you know me, was just ecstatic that my favorite comic character was getting his own series and some much-needed respect. Bernthal floored me in his portrayal in Daredevil. So the series was a very welcome iteration to the character for me. When the show premiered on that November 17, my wife and I took in the first 2 episodes. I'm not a big fan of binging entire seasons because then I have to wait a whole year for more to come out. Instead I choose to take my time getting through them. I prefer to make it last.

But a funny thing happened to me with this series. This time I wasn't taking my time because I wanted to make it last as long as possible. I was taking my time because it was an almost painful chore to sit through episode after episode of trivial exposition, storylines and characters that did nothing for me. I say trivial because we didn't need yet "another" Punisher origin. We've gotten it 3 different times already and doing it again here was completely unnecessary. In short, Marvel's The Punisher was not what I was wanting or expected. Is it terrible? No, not at all. It's just not anywhere near the badass series we, or should I say I, was wanting. I did not want to see a series about Frank Castle giving up The Punisher persona and going into hiding, only using his skills of killing whenever it affected him or anyone he cares about. I wanted to see a series about The Punisher doing what he does best, and that's taking down the mafia, bad guys and supervillains. The entire story arch about the his time in Kandahar and the terrible deeds he and his unit bestowed upon the citizens under the orders of the mysterious and ruthless CIA agent known as Agent Orange was tiresome to me, and deflected completely from the story and character I wanted to see. I should have known though, because with the very first episode, we see The Punisher destroy his skull armor after one last job. Months later we see him working a construction job, with a long scruffy beard and long curly hair using a different name, presumably in hiding having given up The Punisher persona. 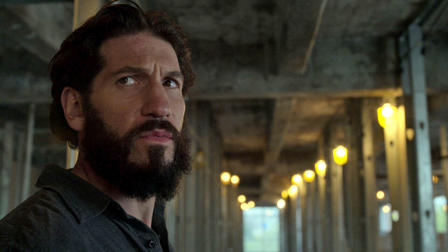 Don't get me wrong, the series isn't bad. Not by a long shot. It's just tirelessly dull and uninteresting for the most part with various plots and stories digging deep into Frank Castle's past, his attempt to hide from the public, and his new partner's (Micro) own history, which revolves largely around his family and his seclusion from them. While not entirely uneventful, it's all just too much of "other" things that take away from the experience real die-hard Punisher fans wanted or hoped for in his very first series. The show feels more like a slow-burn procedural drama/thriller rather than a show about The Punisher going after bad guys - namely the mafia as that's what we've grown to expect. And it's because of this that it took me more than a month to finally get through the entire 13 episodes when it really should have taken a week or so because of my fascination and love of the character, despite my insistence on not wanting to binge.

But it's not a total loss though. Episode 10 "finally" picks up the pace and packs a punch, and the last 3 episodes followed suite and became much more bloody, gritty and ultra-violent. To put it bluntly, the last 4 episodes was the show I really wanted, and it took sitting through 9 tedious ones to get to that point. And I know I'm not alone in this feeling either. I've been following the voices of the fans and outcry online and it's pretty unanimous. The fans who have known the character and followed him through countless comic books and films were severely let down by the show's slow pace and structure, while those who went into the series cold, only having the faintest or slightest knowledge of his history enjoyed it. What's more, he never even wore his trademark skull for most of the series, a mistake that they seemed to learn nothing from when it came to Mark Goldblatt's '89 Punisher film, which was excellent and my personal favorite, but drew strong criticism for not having his trademark skull on his chest. A mistake, I might add, that director Goldblatt wholeheartedly agrees with upon reflection and would change if he could go back in time. And really, that's one of my biggest gripes. It's a show called The Punisher, but he's not that character for most of the 13 episodes, instead choosing to be someone else as he tries to hide from that life, until his past actions reap strong repercussions that ultimately bring him right back to becoming the person he tries to hide from, but knows it's who he really is.

The solid points, namely the excellent cast and solid direction, to a large extent make up for the shows shortcomings, such as it's slow pace and misdirection with storylines. And I have to admit that I'm quite frankly shocked in the direction that series showrunner and sometimes writer Steve Lightfoot (Hannibal) took considering how great NBC's Hannibal was. Here's to hoping that either Marvel/Netflix find another showrunner next season, or hear the fans complaints and make the necessary changes needed to ensure a long and fruitful success. I think it can happen. It just needs some strong changes and the right person behind the scenes spearheading the direction.

The Punisher Season 1 is currently streaming on Netflix, as well as Daredevil Season 2. 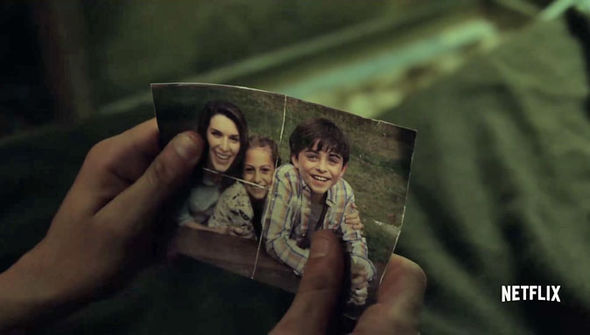 Jason is an 80's kid (currently in his 40's) who grew up on a healthy dose of action and horror films, toys and Nintendo. Who are we kidding? He hasn't grown up yet.
Posted by robotGEEK at 2:36 PM