Please allow me to introduce Kat to you all. She is my loving partner in crime, whom I see most of these films with, whose love of cinema, and in particular Bad Movies, is only matched by her love of movie popcorn. Her first contribution today is her Top 10 Films she's seen in 2017. Not necessarily films made or released in 2017, but the ones she finally got around to seeing for the very first time and fell mad-deep in love with. Let's begin.

Kat's Top 10 Favorite Films (and 1 TV episode) that she watched in 2017, in no particular order, as she loved all of it. 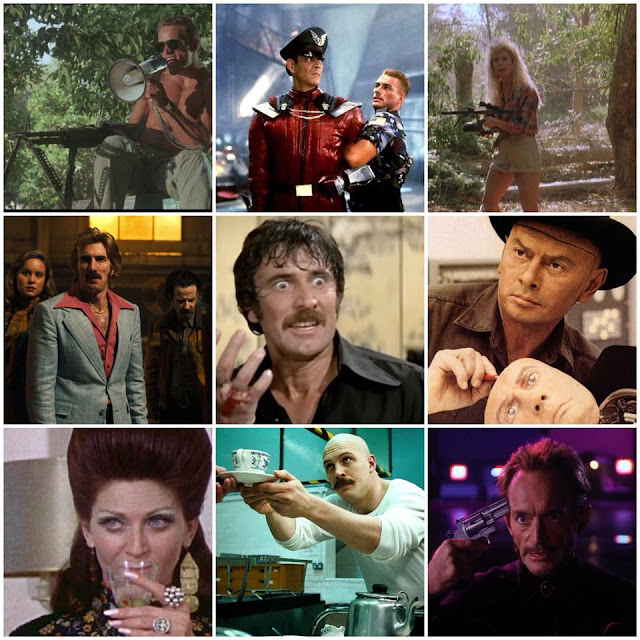 What a bizarre movie. It’s about a hit-man hired to kill (and also kiss) Oliver Reed, who may or may not be in love with him. He employs super models as his coworkers. No further explanation needed.
2. Street Fighter (1994)
Raul Julia is a gift to mankind. This was his last film and he uses every minute of his screen time to be wonderful. Perfection.
3. Mankillers (1987)
Hot female prisoners are hired to take out a dirty cop. Ridiculous costumes, performances, and THE most prolonged death scene I’ve ever seen.
4. Free fire (2017)
his is the only film on the list that actually came out this year. Sharlto Copley is so much fun as a narcissistic coward in this fun, action-filled, and somewhat bleak film from a favorite director, Ben Wheatley.
5. The Man From Hong Kong (1975)
A policeman is in Australia to extract a drug-runner. George Lazenby is a kung fu master (allegedly) who doesn’t kick very high. They are in a game trying to outwit each other. With very real dangerous stunts and explosions that get a little too close to the actors, it’s a wonder this film got made. (And I love it.)
6. Westworld (1973)
I love the series, so I finally saw the original. It’s hard to put into words why this is so good. It’s 70s. It’s dark humor. It’s Yul Brynner being weird and wonderful.
7. Season of The Witch (1972)
You’d never guess George Romero directed this. It’s a weirdly accurate film about a woman exploring witchcraft, her own sexuality, and empowering herself. (Also she kills people.)
8. Bronson (2008)
I watched a lot of Nicholas Winding Refn films this year, but I think I’ve narrowed my favorite down to this one. Tom Hardy is fantastic. The visuals are like A Clockwork Orange on acid. Such a beautiful experience. Alejandro Jodorowsky has named Refn as his “film spiritual successor” and I have to agree here.
9. “Cutting Cards” (Tales from The Crypt/Season 2 Ep 3 1990)
I know this is cheating, as it’s a TV episode. However, this is my favorite Lance Henriksen performance ever. In this episode, he plays a manic gambler obsessed with winning at any cost. He is ruthless and funny and weird. The directing for this episode stands out.
10. (Not pictured) Deathproof (2007)
Kurt Russell is Stuntman Mike. He is violent and confident...until he encounters the incredibly badass Zoe Bell and her relentless girls out for revenge. This film is fun and violent. Zoe Bell is an adorable, feisty, and incredible stunt woman who steals every scene. Quentin Tarantino has said this is his least favorite film, but I heartily disagree with him.

❤️
What were your favorite films you saw this year?

Kat is the wife of the robotGEEK. She loves bad movies, good popcorn, and will loudly voice her opinion on both.
Posted by robotGEEK at 10:27 AM