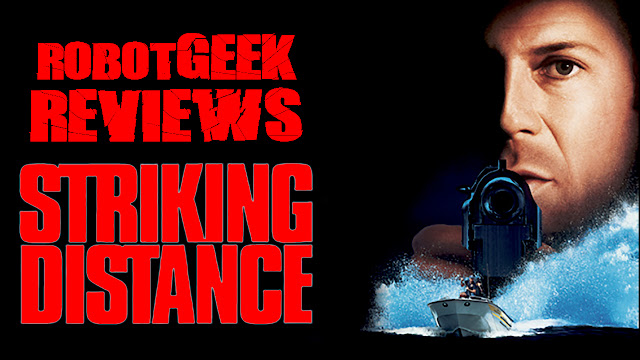 Bruce Willis made a ton of flicks in the 90's. No joke. Look it up. And this is one of his best, despite the fact that it often gets overlooked

Sandwiched between Death Becomes Her and his supporting role in Pulp Fiction, Striking Distance sort of came and went with very little attention and fanfare, despite the fact that it was directed by Road House's Rowdy Herrington (such an awesome name), and contained easily one of the best supporting casts in a 90's thriller that I can recall. If memory serves me right, I did in fact see this way back when, but had forgotten nearly all of it, which doesn't surprise me since it seems I'm apparently not the only one. It's a shame though, because having revisited it recently, I discovered it's quite possibly one of the most underrated flicks to come out of Bruce Willis' hectic 90's filmography. So let's dig in.

Homicide detective Tom Hardy (Bruce Willis) is hot on the trail of a serial killer, whom he believes to be another cop. While his suspicions fall on deaf ears, one last run-in with the killer ends with the death of his own father. Following this devastating death, Hardy is demoted to river patrol duty where years go by and he falls deeper and deeper into alcoholism. When the serial killer resurfaces, he seems to taunt Hardy personally by only killing people he knows. With the help of his new partner Jo Christman (Sarah Jessica Parker), he sets out to uncover the truth behind the killer and why he seems to have a personal vendetta. Will he stop him in time before he strikes again?

While not necessarily trailblazing a new path into the thriller genre, Striking Distance is an effective and competent entry that really has a lot of entertainment to deliver for a film that seemed to have either passed people by completely, or just got lost in the epic sea of thrillers during this era. Let's not forget that Willis was also insanely busy during this decade, turning out a total of 30 films (not even including guest spots on tv shows), which is just nuts. Still, this one, oddly enough, got lost in the shuffle. Either way, I think if you just gave it another chance, you'd be surprised to discover that it's pretty damn good in an old fashioned 90's thriller sort of way. And to me, that's one of the best ways to define a solid thriller. By classifying it under that very specific era, it's given an immediate quality that is far too rare these days, where it reigned supreme in easily one of the best decades of cinema. We can't say that about films today, or in the last 20 years for that matter, and that's pretty sad.

Willis does a fine job, as per his usual, in his very stoic, grumpy, moody way, and Parker, here in her one and only action/thriller if I'm not mistaken, also does commendable work. I've always found her to be annoying, but that's probably because I find it hard to separate her from her character from Sex and the City, the shallow annoying city girl who makes all the wrong decisions. Yet I didn't hate her in here, which surprised me. But moving on.

It's really the supporting cast that knocked this one out of the park for me. I mean, it's pretty fucking impressive. Let's begin with the legendary Dennis Farina, who is such an underrated actor with a huge presence. Did you know he was a real life former cop? Man, the guy just seems to pop up in so many random things but always leave such a strong impression. I always forget he was in Manhunter too, or that he was the host of Unsolved Mysteries for 174 episodes after Robert Stack. Then there's Tom Sizemore, John Mahoney (Frazier), Robert Pastorelli, Andre Braugher, Tom Atkins (!!!) and Brion Fucking James! Man, what a cast! 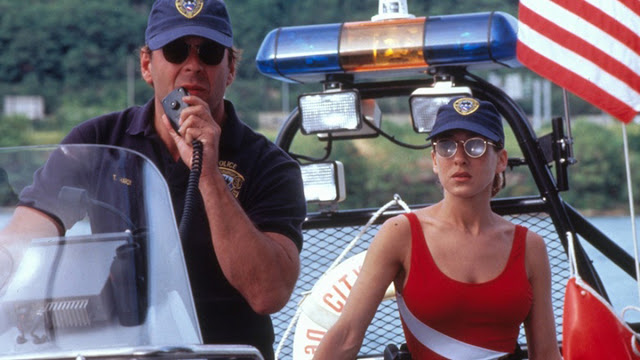 At first I was a bit let down when I "thought" I knew who the killer was within the first 15 minutes. The film seemed to be a bit lazy, or so I thought, in that department and didn't appear to shake the tree or divert your attention somewhere else. Boy was I wrong though. It did not turn out the way I had thought. But even if it had, it didn't take away from it's entertainment factor for me. I found it to be enjoyable-y unpredictable and predictable at the same time, while also intense, fun, thrilling and with some solid camera work and killer action and stunts. Really, all the things you want in one of these.

Posted by robotGEEK at 9:04 PM