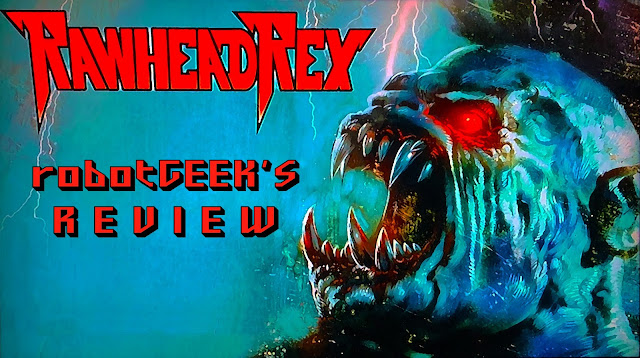 "This Clive Barker Folk Horror Creature Feature may not be one of the best examples of 80's horror, but that didn't stop Kino Lorber from pulling out all the stops on this semi-obscure cult classic in a killer Blu-Ray release"

This 1986 Creature Feature comes to us courtesy of Underworld AKA Transmutations (1985) director George Pavlou. Marking legendary author Clive Barker's second foray into screenwriting (based on his short story), he would follow this up with his genre-defining franchise starter Hellraiser in 1987. In fact, Barker credits his miserable experience with this particular film for inspiring him to begin directing his own screenplays personally, because quite frankly, he hated this one. As is often the case, his original vision was severely skewered beyond his control and the final product was not what he had envisioned. Yet, despite it's many issues, it's retained a cult status for 30 years, and fans have had to wait as many years for a proper release, complete with all the bells and whistles. That day has finally arrived, so let's dig in. 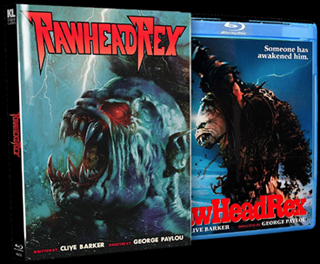 Kino Lorber releases for the first time ever on Blu-Ray this slightly obscure cult classic in a brand new and impressive 4K restoration with a healthy dose of special features and killer packaging to boot with brand new cover art (with the original poster art found on the reversible sleeve) and new slipcase art. As far as packaging goes, this thing is slick as hell and one of the better looking releases I've come across recently.

The film comes packed with new interviews, with the most enlightening coming from the F/X team responsible for designing and creating the titular monster figure himself, and the struggles they endured attempting to design a monster in the shape of a penis (Clive Barker's orders!), in a very short amount of time, using minimal resources and a very small budget. And to be fair, whether you actually like this monster design or not, after hearing firsthand from those that created it how damn near impossible it was might make you appreciate it just a little bit more. For all it's failures as an actual scary monster, I'm shocked they were able to pull it off at all.

As far as the film itself, I have to be honest. I wasn't all that into this one, which surprised me because on the surface it sounds right up my alley. And I've come across many a film from this era that, while I knew "of" them, I never actually got around to watch them until now. And usually for the most part, these are the films I tend to fall in love with more. These lost undiscovered gems that flew under my radar for decades, only to discover them all these years later tend to be my favorites. But this one just didn't connect with me. In a weird way, had it been cheesy bad, that would have been a far more enjoyable experience for me. But as it stands, it's just a cheesy low-budget Creature Feature that has a few memorable standout moments, but for the most part, plays the film straight, which isn't necessarily a bad thing had it been badass, or accidentally funny; because really, it needs to be either badass or unintentionally hilarious - there's usually no in-between with these types of films.

Rawhead Rex digs deep into the folk horror mythology, which does a good job at setting itself apart from the rest of the crowd of mid 80's horror films featuring monsters. Still, it's far from a slam dunk. While it's not awful (though some may argue that the creature design certainly is!), it's too much of a bore and not entertaining enough in the "so bad it's good" or "surprisingly badass" area's to really leave a strong impact. I have to commend them though, because considering the circumstances behind the scenes (which are all laid out in detail in the new interviews), I'm surprised it turned out as competent as it did in the end. And despite it's many, many flaws, there are a number of shots that do in fact leave a strong visual impact that sort of come out of left field, but when they're surrounded by somewhat lazy filmmaking then the ones that do stand out are pretty impressive. 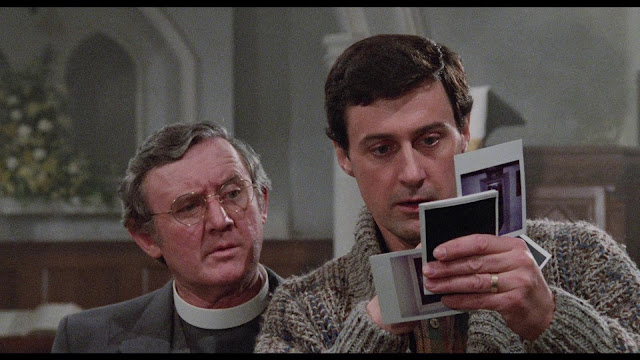 Ultimately, the budget, or lack thereof, is plastered all over the screen. In fact, funding dried up and the crew walked off the set, leaving the film incomplete and without an end. Director George Pavlou, after having begged them to return, with only half of them actually coming back, was able to secure the final act, which takes place in a cemetery, where we're given the showdown between Rawhead Rex and the one and only object that could defeat him. It's an interesting finale to say the least, and because of it's extensive use of dated optical effects, does a better job at reminding us of the art of practical optical effects done cheap and fast rather than delivering a satisfying end. It is oddly charming though, I'll give it that. But you know, I can understand it's appeal and why it does in fact carry a large cult following. There's definitely a market for these types of films and while I didn't find it all that entertaining myself, there are plenty out there that do.

The new interviews are fun to dig through. The F/X team is open and honest in their recollections of working on this film, and despite budget and time restraints, did enjoy their experiences....for the most part. The most interesting one would have to be from Heinrich von Bunau, who unfortunately was given the job of donning the Rawhead Rex costume. He was a large 19 year old scuba instructor when he was discovered strictly based on his large frame and given the role, having never been in a film before....or since for that matter. Despite the fact that most would find the experience of wearing this one-piece suit for 14 hours a day an absolutely miserable one, Heinrich is surprisingly grateful about his experiences and looks back on that year 3 decades ago with fondness. Director George Pavlou does not have an interview, but does provide a new audio commentary which is fascinating to listen to if you want deep insight into the films troubled production. 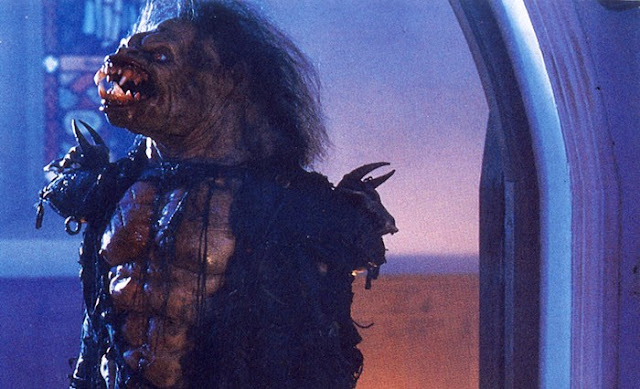 Posted by robotGEEK at 6:10 PM