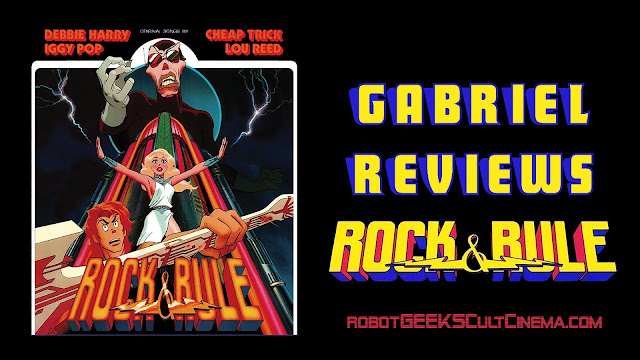 
Greetings and salutations, fellow retro-nerds! Welcome to my first of many installments of robotGEEK’s Cult Cinema- ANIMATED Edition. Today’s feature is an obscure little mind-bending gem from 1983 that goes by the name of Rock and Rule. For me one of the bonuses about this particular flick is this will be my absolute first time seeing this, so my review will be more visceral compared to revisiting something already seen. So, without further ado, grab your key-tars and strap yourselves in—this Canadian furry fetish ride is about to blast off.

Rock and Rule takes place in a post-apocalyptic future and revolves around a struggling singer named Angel. At a club’s talent night, she gets the attention of (and subsequently kidnapped by) an established rock god and 2D Mick Jagger tribute(?) named Mok, who himself a successful musician but is currently experiencing a bit of a career slump.

So, how does he intend get out of this vocational funk, you ask? Of course, he wants to use her lovely singing voice to summon a creature from another dimension. It is then up to Angel’s band mates to track her down, where their psychedelic quest comes to a head in Nuke York.

Rock and Rule was directed by Clive A. Smith, whose later work would come to include animated features like Peter Rabbit (1991), and Pippi Longstocking (1997). It was written by Patrick Loubert and Peter Sauder, who, along with Smith, have credits that include Babar (1989-2000). Incidentally, the film’s production company, Nelvana, was also responsible for the animated short featured in the cult classic The Star Wars Holiday Special (1978).

Following in the footsteps of iconic animated features like Heavy Metal, this movie’s soundtrack featured big names like Cheap Trick, Iggy Pop, and Earth, Wind, and Fire. In fact, they were such a big deal, the movie started off by introducing the bands before the actual cast. Because obviously, the studio was banking on a fun, yet thought-provoking plot and stellar voice acting by an all-star cast, right? Right??

Aesthetically, the art direction and animation sequences were appropriate for the era-- reminiscent of a Don Bluth/Disney mash-up on day four of an LSD bender. The futuristic world itself takes a back seat in much of the cinematography. This is normally okay, but the characters and story seemed to have joined in and let the music take the wheel, which isn’t too bad in itself, though nothing too spectacular either. Some of the special effects were decent, including the usage of live-action elements and various non-animation tricks to achieve unique ends.

Though there were a few funny and otherwise clever lines here and there, the dialogue was plain, almost boxy at times, but this is likely because the music is the star here, taking center stage. The soundtrack, as previously mentioned, was the main attraction. Parts of it were very synth-heavy, though it found its way back to its rock sound, and many of the vocals had that raw, almost low-grade quality to them. Once again, this is quite fitting for a film of this caliber. For me, it wasn’t until the third act that the music resonated with me in any substantial way. But then again, I was sober when I saw it.

How this film managed to elude me for so long, I have no idea. But now I’ve seen it, and am a little more whole for it. If you want to indulge in an hour and twenty-so minutes of fair tunes set to weird animation, and aren’t looking to expel too much brain power, give this movie a shot. It’s worth at least one viewing. Oh! Try watching it at half speed—Everyone sounds drunk.

G. J. Gonzalez is a doer of many things, including but not limited to writing sci-fi stories, acting, and developing software. Keep an eye out for his latest work, Althea: An Oneiric’s Tale, coming soon on Amazon.
Posted by robotGEEK at 6:31 PM