Blu-Ray Review: Howard the Duck (Universal): A Hot Mess Like No Other 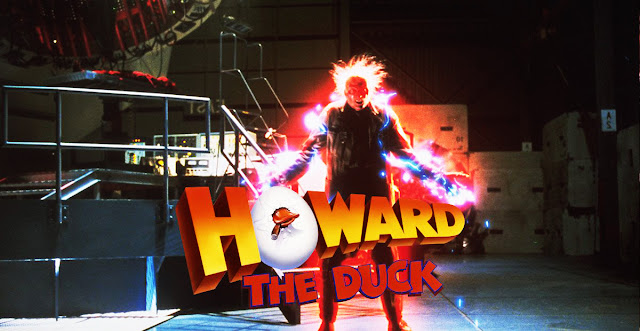 Few films carry the distinction that George Lucas' Howard the Duck carries; the big budget box office trainwreck that never connected with it's audience initially, despite it's roster of incredible talent behind the scenes. It's usually films like this that are often misunderstood, or drastically mis-marketed in such a way that it was doomed right from the beginning through no fault of it's own. These are the types of films that generally bomb during it's initial run, yet find a loving and long-lasting cult status as the years and decades go by, much like this film. Typically these films require time for the average moviegoer to appreciate what it was trying to do in the first place, an aspect lost to most of us when it's so far out of left field and different. Most of these films go on to legendary cult status as a misunderstood masterpiece. This is not one of those films.

Howard the Duck is just an odd duck to put it quite frankly. A truly bad film that struggles to find the right balance between tongue-in-cheek humor, entertainment and the sci-fi elements at the heart of it's mythology. Yet, at the same time it's oddly entertaining in a way that you just can't look away. It's because of all it's faults and downright confusing decisions that it makes it a uniquely satisfying experience. We all automatically say that we love it, as do I. But why do we love it? I've been wrestling with that thought ever since I revisited it when I found the Blu-Ray cheap a few weeks back. I think my only real response is that it's just a hot mess. An unintentionally bad film that entertains in a way that no other film has before, or maybe even after for that matter. It's surprisingly bold in it's attempt at creating somewhat of an antihero character out of a duck the size of a small person who, despite being an adult, acts and reacts like a spoiled child. And truthfully, he's incredibly annoying. 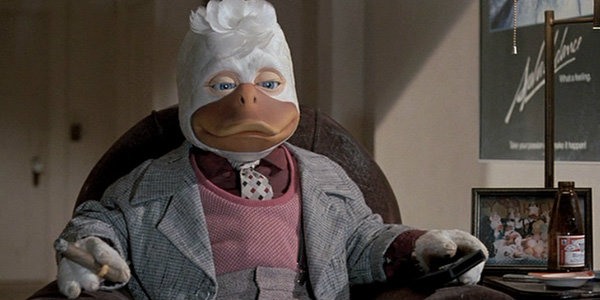 But it's not for everybody, and generally regarded as a terrible film, even by those who actually love it. I already know I could never show this to my wife, who's never seen it before. I already know she won't know what to make of it's bizarre sensibilities and absurd nature. And I think that would probably speak for most people today. It's completely different though for those of us who watched this for the very first time as a kid in the 80's, and continued to revisit it often because it always seemed to be playing on HBO or Cinemax. I don't know if those experiencing this for the very first time today could appreciate it's bonkers

When you consider George Lucas was responsible for producing this, right after his original Star Wars trilogy mega blockbusters, you just automatically think it's going to be another great big expensive sci-fi film. I'm sure most people thought that too. Yet, despite the Lucas brand name all over it, and despite it's massive budget in the tune of 35 million dollars (a lot back in 1986), Howard the Duck crashed and burned. Unlike other big budget films that would eventually recoup it's fee's overseas or through video sales, there was no salvation to be had for this one and continues to be the very definition of a big budget flop. 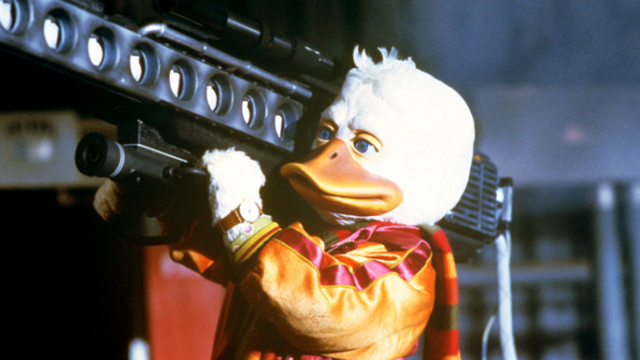 Yet it's retained it's cult status ever since it's release, and continues to grow even to this day. It's a film that, despite all of it's cards stacked against it, is still entertaining in a trainwreck sort of way. I can say that revisiting this recently, I thoroughly enjoyed it. I loved the mid 80's practical effects; I loved the Thomas Dolby songs; I loved the unintentionally cheesy bizarro world it's created circa 1986, and I love the design and execution of the Howard suit. My only real gripe is that I found the character to be annoying in general, whining and complaining about everything and making impulsive emotionally driven decisions like a moody teenager rather than a level-headed adult. Jeffrey Jones ultimate transformation into the films primary villain also makes this worth the watch. Personally speaking, Jones' performance ultimately became the highlight of this film for me. 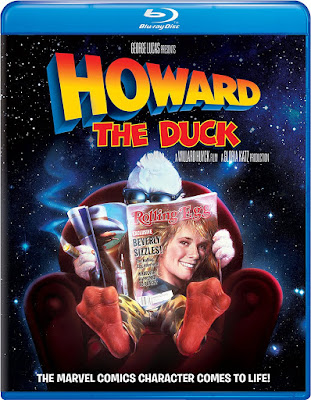 The film comes in a stunningly sharp 1080p HD widescreen presentation and an HD master audio 5.1 for an impressive sound. Subtitles in English, Spanish and French are also included. While the technical elements are impressive, it's the Special Features that make this worth purchasing.

That's a lot of extra content, and while some of them are quite short, the main one to dig into would be "A Look Back at Howard the Duck", which runs the longest of all the features. Here we hear from the writers and director about what they had attempted to do, their experiences making this, and their feelings about it's reception. You also hear from the main actors such as Lea Thompson and Jeffrey Jones, and even one of the 8 people who donned the Duck suit, but ultimately did most of the work and got the biggest credit. Sadly, there's no sit-down with George Lucas here....understandably.