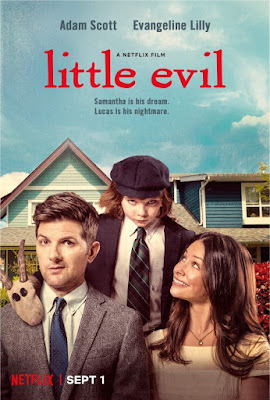 Here's a film I had never heard of before, and only decided to watch it because it sounded cute and interesting to my wife. Thinking it was a series, we threw it on only to be surprised that it was in fact a film, not a show. But let me tell you, I'm so glad she decided to watch it anyway because it was a fun, refreshing, clever and funny comedy that never took itself too seriously, and knew how to balance the right amount of humor in the horror genre. Little Evil is humorous take on The Omen, and it's even funnier if you are a parent or step-parent, as it touches on a lot of things we go through raising kids. Solid cast, solid laughs and a very well made film that plays with standard horror film tropes in a clever way.

Netflix has so much original content coming out so quickly that it's hard to pick just what to watch, what will be good and what will fall flat. And honestly, I have to rely on positive word of mouth or reviews and buzz that hit the news such as with their recent hit Glow to decide whether to take a chance on something. So I was surprised that this has no buzz whatsoever. But I can tell you, it's a fun one. Just give it a chance. You won't be sorry.