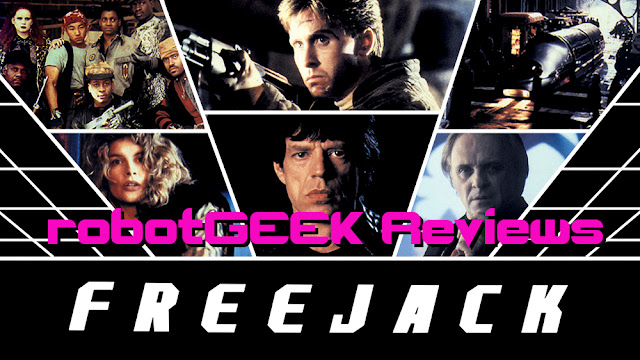 Sometimes it's like Hulu and Crackle can just read my brain, because more often than not, when I think about revisiting a film, it automatically shows up on either of those apps, which is just what happened with Freejack. Somehow this title popped in my head and I began looking into grabbing myself a copy since Netflix didn't have it to rent as a physical DVD or to stream. Literally a few days later it shows up on Crackle, and I couldn't be happier. So let's dig in.

Loosely based on the short story Imortality, Inc., Freejack tells the story of a professional race car driver who's teleported through time into the future a second before a car crash would ultimately kill him in the present. Once in the future, he needs to figure out why people are trying to kill him as well as how and why he just experienced time travel.

Freejack was just the thing I needed to scratch my 90's sci-fi/action itch. While not spectacular in budget or story by any means, it still remains a highly satisfying film due largely to it's ultra-slick style, some outstanding direction and action sequences courtesy of director Geoff Murphy (Young Guns 2, Under Siege 2), and a healthy dose of cult character actors that bring this film to life. And don't be fooled by it's mediocre reception and reputation, Freejack is a really good film, full of style, grit and a very ultra -cool 90's vibe that acts as a stark reminder of how films like this "used" to be made back in the day. And I think that's one of the things I liked most about this futuristic tale. There are no flying cars or spaceships, but rather a future steeped in more of a reality-based setting where old and new are mixed, much in the same way Timecop did it, another excellent 90's sci-fi/action entry. With the exception of 2 questionable effects scenes, the fact that they use practical and optical effects more than anything really gives the film a lot of character. It's the future so there's definitely a futuristic design to everything, but it's more gritty than glossy, which works great. 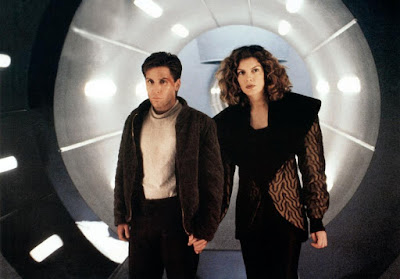 This is a film I remember being excited about upon it's release. I was really big into sci-fi/action in the 90's (still am), and I remember this film being a big deal because it surprisingly co-starred Mick Jagger (???) as one of the villains, and he was doing the promotional rounds before it's release, where all the shows were touting it as the next big summer blockbuster. Well, as we all know, that didn't happen and it came and went with little attention, which is a real shame because it's not a bad film at all. A bit uneven, with some peculiar casting for sure, but nowhere near a bad film. Yet, I didn't remember much about it at all going into it again. Just an image here and there, but for some reason this didn't resonate with me initially all those years ago and I've essentially forgotten about it since then. And these are the experiences I enjoy the most, when I revisit a film that I hadn't seen in decades, only to discover they're so much better than I remember and for the most part, it's like watching a brand new film for the very first time.

Emilio Estevez is a fine actor, but I can't help but feel he's a bit wrong for the lead in this. He does a fine job regardless, but he comes across as ill-fitting for the role. And then there's Mick Jagger, who's a far more bizarre choice as the lead gun-for-hire-assassin who spends the film relentlessly hunting down Alex Furlong (Estevez). I never in a million years would have picked Jagger for the role, and after finally revisiting it, my feelings haven't changed. He's a truly bizarre choice and a completely wasted bit of stunt casting. While not a bad actor in the least, his performance is so bland that I struggle to find anything amusing or interesting about his character or performance. Had Jagger been even slightly amusing, hammy or even charismatic, then that would have been far better than what he's like in this film. But sadly, he is not, and so it's both a wasted performance and a wasted role. And then there's Anthony Hopkins, who does what he does well and shows up from time to time being Anthony Hopkins without even trying and delivers a role that reminds me of his turn in the HBO series Westworld. At least he's not trying to do an American accent. 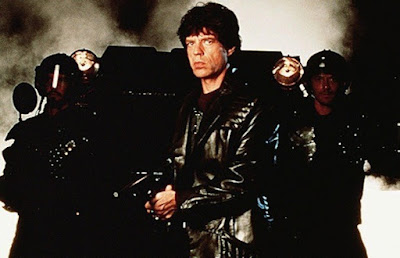 I've always considered Geoff Murphy a very underrated director, and this was just another sad reminder of that. Murphy infuses this film, as well as his others, with a streamlined gritty style that's reminiscent of Roland Emmerich and Peter Hyam's early work. In fact, it's this style that give this film so much substance more than any other aspect, because quite honestly, while entertaining, had it been in the wrong hands, it could easily have ended up a disaster. But Murphy knows what he's doing. He's a veteran, and knows how to shoot a film well. Reports indicate that some involved with the production were not happy that he spent too much time focusing on the action rather than the other elements of the film, but my personal feelings are that the action saves the film from being a total bore. The end results speak for themselves, and Freejack carries a nice balance of action, suspense and thrills. If you've never seen it, or it's been a while, definitely take a chance on this one immediately. It's a great and highly underrated good time.

How to see it:
Freejack is currently available for free on the Crackle app, which I use through my XBOX 360. It's in HD and widescreen, so I would hurry and jump on this while you can, as I "think" Crackle changes their films up month to month. So time is wasting! If you need a physical copy, you can pick up a Laserdisc, VHS and DVD all for under $5 each, but be warned, the 2000 DVD release is bare bones, but does come in widescreen thankfully.
Posted by robotGEEK at 11:55 AM