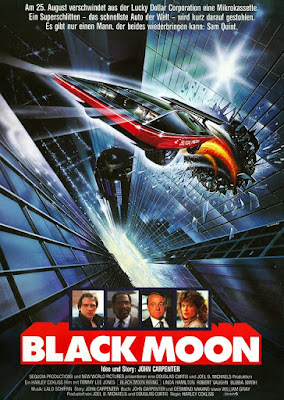 Here's a funny story. I revisited this one this past week and as I nearly finished my review, it dawned on me that I might have already done that a few years ago and I just don't remember. I guess that tells you what to expect with Black Moon Rising in general. Anyway, I put in the time to do this, so here it is anyway. LOL

If I remember correctly, Black Moon Rising is the sort of film that kind of came and went with little notice. In fact, it's a film that I'd all but forgotten about for many, many years, until I would randomly come across that sweet cover art. Still, that never made me want to actually seek it out and revisit it. But since I'm knee-deep into the 80's thriller genre, I thought now would be as good a time as any. So let's dig in.

A thief hides important documents in a new experimental car while he's being chased. When the car gets stolen by a career car thief, he must find a way to steal the car so he can steal back his documents, with his life hanging in the balance.

If you go in with little expectations, you'll thoroughly enjoy this somewhat tame effort. Honestly, it could easily pass for a Made-for-TV movie, but that doesn't mean that it's bad. A bit slow, but still enjoyable for brief images of that sweet car and to actually see Tommy Lee Jones look like he gives a shit and not just phoning it in, which is pretty much all he's done in what seems like forever now, but literally decades in the least. While not terribly exciting, it offers up enough entertainment value to keep you invested through a slick 80's thriller sheen. Casting, score, visuals and tone are all very much 80's, and a product of their time. And that's what makes this particular film so interesting. Had it been made today, it'd be boring as fuck. No lie. Yet it's the very specific time period in which it was made that holds your interest on a visual level. And let's face it, the star of the film is the car, the Black Moon, which just rules on so many levels. Yet for a film called Black Moon Rising, it's shockingly absent for a large majority of the run-time. Still, when it does show up, it's pretty fucking awesome.

In case you weren't aware, this is co-written by John Carpenter, also taking a "story by" credit here the same year he directed Big Trouble in Little China. And honestly, you'd never guess that just by watching it. It doesn't really carry a Carpenter vibe or flavor, but I will admit that had he directed this himself, it would have turned out much better, and certainly more stylish and interesting. Not that director Harley Cokliss is bad, because he's not. In fact, I love his work in Malone, his next film the following year with Burt Reynolds. But while there are certainly moments of pizzazz, there are just as many that are plain uninspiring. And unfortunately the trailer really sells you on the flashy scenes, which makes the film look awesome, but as a whole, it drags quite a bit and never really packs any sort of punch either on an emotional or visceral level. Too bad too, because it has a lot of the right ingredients, just not enough action or excitement to keep it all together. Still, had Carpenter directed it, just his visual eye candy alone would have made this a better movie by leaps and bounds.
Posted by robotGEEK at 2:01 PM