Going into the new Netflix show Glow, I had no idea that it was based on an actual all-women's wrestling team from the 80's. I just thought it was some really creative entertainment. In fact, I knew nothing about it going in, other than it was a new Netflix production about women's wrestling set in the 80's. So we went in fairly cold, and ended up loving the shit out of it. In fact, Glow was so damn good that it was hard not to binge-watch the entire season. It's an interesting idea for sure, and the team behind this show effectively manage to mix just the right amount of laughs and drama with brilliant casting and story.

Not knowing anything about this, imagine my surprise to see the impossibly cute Alison Brie "and" Marc Maron, who I just love in his IFC show Maron, which is also on Netflix. The supporting cast of mostly new actors and actresses also impress. I'm not going to get into the whole storyline and possibly ruin any surprises in store, so I'll just leave saying that it's a well scripted show, with just the right balance of humor and drama, full of strong performances and being set in the 80's, it's like nostalgia on crack! 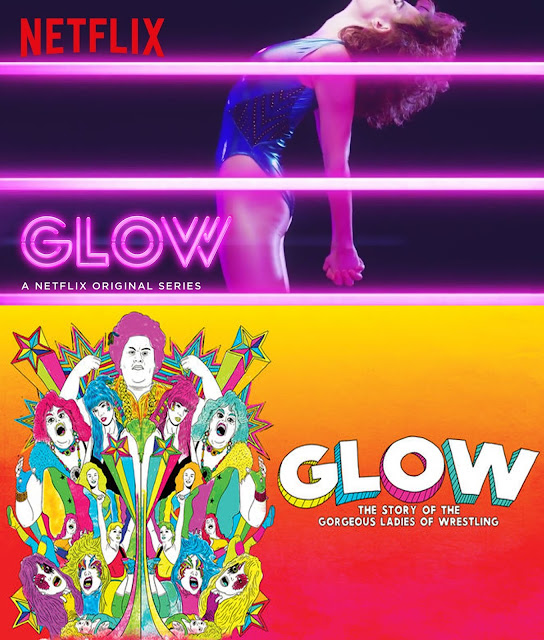 When we finished the show, we were so bummed that it was over and that we have to wait until next season for more episodes, so we decided to keep the Glow vibe going by following up the finale with this excellent doc, which happened to premiere on Netflix before the show did. But again, I didn't know anything about it until I saw the show.

This fascinating doc is just as fun and engrossing as the show, if not more. Here we get to meet the actual real Gorgeous Ladies of Wrestling in new interviews as well as vintage footage. They tell their stories about how they even got to be on that crazy show in the first place, what they're doing now and Glow's long lasting legacy and cult status. It truly is one of the most fun documentaries on Netflix right now, even if you're not a fan of wrestling. You don't have to be to enjoy this flashback to the 80's. It's a lot of fun. Check out the trailers for both the show and the documentary below.