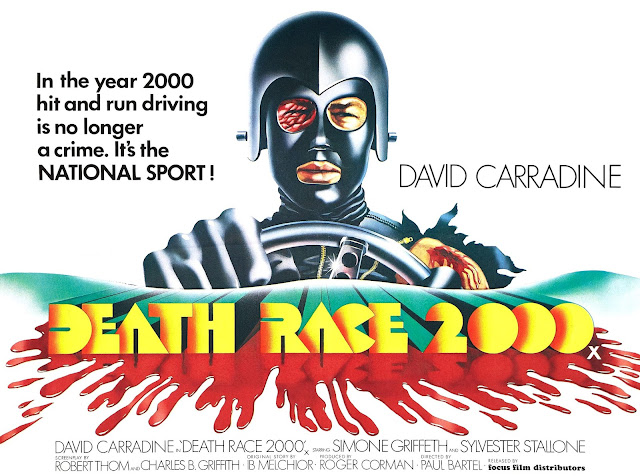 I hate to admit it, but I've actually seen Paul W.S. Anderson's remake before I actually got around to this original version. And what a shame that was, because while I did actually enjoy Anderson's remake (gasp!), this one is far superior in every way. Let's begin.

Directed by bit-part actor Paul Bartel, this film gives you pretty much everything you'd want in a film like this, and it does not disappoint. It's fast, funny in a very tongue-in-cheek sorta way with it's social satire, with tons of action, explosions, car chases, enough fake pink blood and unnecessary nudity to satisfy your craving. It's campy, but in a violent, nasty and gritty way. What's more, the cast is pretty phenomenal. For starters, the legendary David Carradine stars as the main attraction, Frankenstein. And he carries the entire film squarely on his shoulders, and does a magnificent job of it. He's cruel and sadistic, but you can't help but like him because he's so damn charismatic. But I think the highlight for us was hands-down Sly Stallone as Machine Gun Joe. He was such a sight to behold. Angry, violent, misogynistic and so full of over the top rage, I don't think there was a single moment when he wasn't yelling and it was hilarious. He was so fantastic that we kept saying how they should have made a film entirely on his character. Stallone definitely steals the show in every scene he's in. 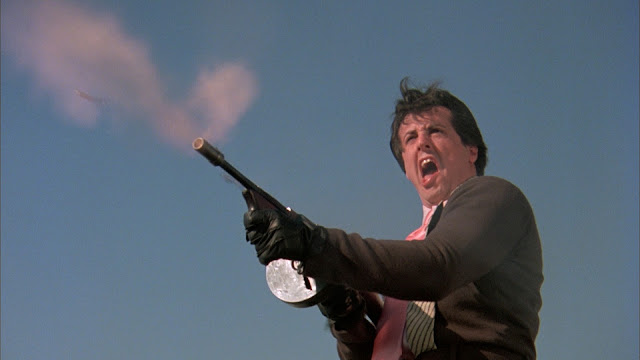 I think the glue that holds it all together so well is Paul Bartel's slick direction. Campy, yet somehow sure-handed and beautiful. It's hard to explain, but even with such a low budget and minimal location changes, the production design department really went above and beyond in giving the film a retro futuristic look and vibe in every single scene. It's ultra-stylish when you don't expect it to be, and combined with Bartel's direction, Death Race 2000 looks amazing. It's a helluva rip-roaring good time to boot.
Posted by robotGEEK at 3:33 PM