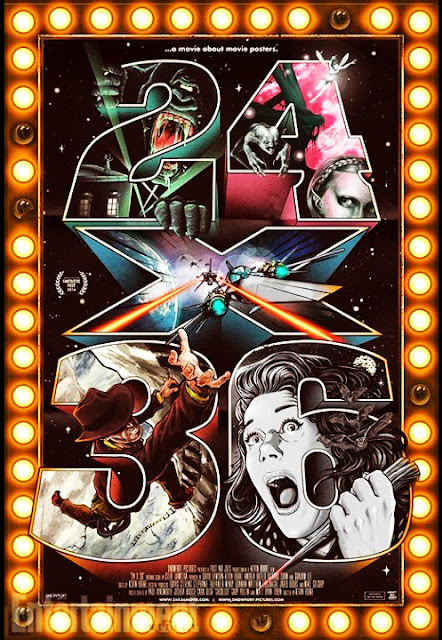 I don't know how this one flew under my radar, because movie posters are one of my many passions, and a documentary about just that very thing would have immediately stuck in my head. But alas, I somehow missed this one. And I'm not entirely sure how I came across it now, but it looks like it was released back in 2016, but I guess it's never late than never. So let's dig in.

I think the topic of movie posters, and their ever-changing and evolving style is such a brilliant idea for a documentary. It's a topic that's rarely ever discussed anymore, except when complaining about the prices that any new Mondo release goes for. As for the state of movie posters in general, it's pretty sad, and I know I'm not the only one who really dislikes where they are right now with the big studios. Movie posters used to be an art form, just look at any of them beginning with the 20's going on through the 80's. Each decade offered a different style, but each very much an artistic endeavor, with the work being done in the 80's being a critical and commercial high point. Once we got into the 90's, it all started to change, with photography creeping into the format more and more and hand-drawn or painted artwork going out the window. And it's only gotten worse with Photoshop, where every single new film is either a floating head of the star, or a badly rendered collage of images from the film. Just look at most of Marvel's superhero films. Though I am loving DC's Wonder Woman marketing campaign and their colorful almost art deco approach to her posters, as well as Kong: Skull Island's classic artistic approach.

Personally I found this documentary to be highly enlightening, and thoroughly entertaining. It's not perfect, but a very fun way to spend 2 hours of your life, especially if you're an artist or collector of movie memorabilia. For the most part, I really enjoyed it, but I felt that it devoted too much time to the state of modern-day posters today rather than the art and skill of it in decades past. Meaning, a good chunk of this film's running time is pretty much spent on Mondo and other's like it, which is cool because they are the ones who reinvigorated the "hand-drawn movie poster" movement, but I really would have liked to have learned more about the older posters and their artists, which they do touch on early on, but I guess not enough for my liking.

At the same time it was interesting getting to see in person the artists that I currently follow, some of who's work adorns my walls, and their thoughts on the current movement and where it's headed. It also brings up an issue that I have with these new posters, and that's the flippers who buy the extremely limited quantities out within seconds and immediately flip them around for ridiculous fee's on eBay in a matter of minutes. I knew I wasn't the only one who had an issue with this and I was glad to hear from the artists themselves how it pretty much makes them sick that some asshats (flippers) are only in it for the money and take so much away from the collectors who just want one to hang on their wall, not for profit. It's good that most new companies out there that do the same thing are mass producing them instead of limited runs of 100 like Mondo, that way anyone can get one if they want. I like that idea.

Definitely worth a watch and it's a fun one at that. Just wish so much time hadn't been spent on the current movie poster crisis, and instead focused on the classics and their lasting appeal compared to the over-Photoshopped nightmare we're currently in. But I get it, trust me I do. There's a resurgence and an urgency and art about the movie poster format and it's because of companies like Mondo and others. Hell, I still try to grab one from time to time because some of them are just too badass. One thing's for sure, watching this will definitely get you into wanting to track down some old favorites, or even check out what new artists are doing with them these days.

How to watch it:
The DVD and Blu Ray can set you back roughly $20, which isn't bad at all. Or you can stream it through Amazon in HD.
Posted by robotGEEK at 3:50 PM