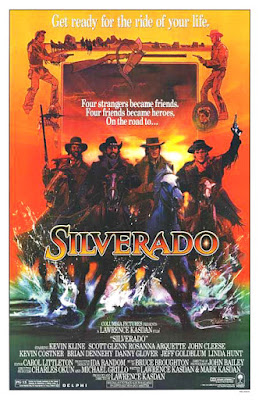 I've always been a casual fan of westerns. Meaning, I enjoy them when I come across a good one, but I don't go out of my way to find them. Of course this also means I've missed out on a whole lot of good ones, which I'm only now discovering, because for every Tombstone I've seen, I'm now learning I've missed out on others like Silverado.

Silverado has been on my radar for literally decades. I've always been aware of it, and have always known it was written and directed by Empire Strikes Back screenwriter Lawrence Kasdan, in a time when westerns were slowly fading away from popularity, but I just never seemed to get around to it as the old saying goes. The 80's weren't totally devoid of the genre though, there were a few exceptions like Clint Eastwood's Pale Rider for example, but westerns were few and far between during this decade. When I recently stumbled upon a fun article about this film and it's lasting impact on the genre and it's insatiably fun vibe that still delivers the goods, I felt it was time to finally get off my ass and check it out. And as luck would have it, Hulu Plus just recently added it to their lineup. So let's dig in.

A diverse group of men cross paths in the most unlikely of ways, and head to the small town of Silverado. When injustice is handed down by a brutal sheriff, they band together to put a stop to it.

After finally having seen it, I finally understand it's appeal and almost cult-ish status. Silverado is hands-down one of the best westerns I've ever seen. Ripe with rich character development, an outstanding cast, and a fun vibe that never ceases to please and entertain, Silverado defied the odds and became one of the best, most entertaining westerns ever made.

Kasdan doesn't try to modernize this in any way. It's an old-school western through and through. Nothing is added to give the film any sort of punch. It's the razor-sharp script, courtesy of Kasdan and his brother Mark, and the films insanely talented cast that gives the film every breath of life it needs. And it's flawless, resulting in one of the most enjoyable western experiences ever produced. 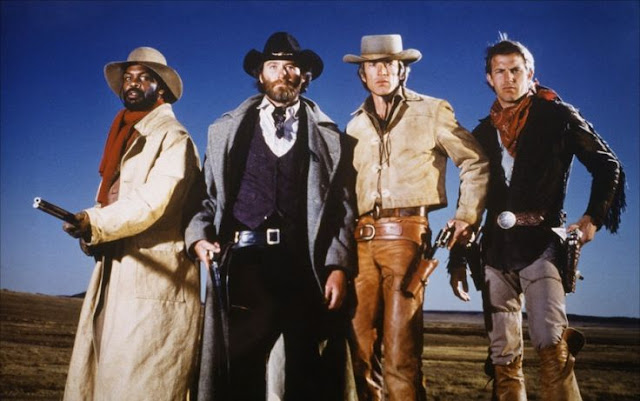 The cast is simply fantastic in this, led by the wonderful Kevin Kline and Scott Glen in understated performances. They're soon joined by drifter Danny Glover, who would also co-star in the excellent Harrison Ford thriller Witness and Spielberg's The Color Purple the same year. His character adds much of the glue needed to hold the group together, and to help propel the story along in all the right directions. Kevin Costner joins the fun as a young, childish and naive gunslinger who can't help but act like a rambunctious kid most of the time, but can use a six-shooter like nobody else when the time calls for it. And it's really Costner who steals the show here. I have never seen him act so "lively" before in a film and his exuberance and excitement in nearly every scene shines through, leaving a lasting impression. And it's because of his role here that he would become a breakout leading man the following year with The Untouchables and No Way Out. These are the main players, but it's also the supporting cast that shines so bright, and as much as I want to talk about them, I think I'll just leave it be for you to discover on your own when or if you sit down to watch this for the first time. Let me just say, the constant "holy shit he's in this too?!" I kept yelling throughout the film was just a constant reminder of all the pleasant surprises this film continued to give me.

As great as the script and acting are in this film, attention must also be paid to Kasdan's solid direction behind the camera. The film opens with one of the best openings I've seen in any film from any genre, and it's a very fast indicator of what you have in store for the remainder of the film. Kasdan shoots with restrained precision, but it's also bold and exciting when it needs to be. For all the moments that are beautiful and subtle, there are just as many that are gritty and brutal, but never in an over-indulgent way, striking just the right balance of both. What makes it all the more impressive is that Kasdan had only directed 2 films prior to this, and what he was able to pull off in a genre he hadn't yet tackled before is so damn impressive. Not only did he deliver one of the best westerns ever made, he did so having never tackled that genre before and did a far better job than most who had been stuck in that specific genre for years, knocking it out of the park. 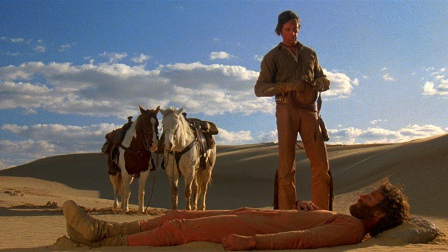 Hands down one of the best film experiences I've ever had, and absolutely one of the best westerns. Every minute was a welcome and pleasant surprise. An outstanding cast, strong script, solid direction and a no-frills approach that lends to an exhilarating experience that builds and builds to a highly satisfying climax.

Posted by robotGEEK at 1:39 PM