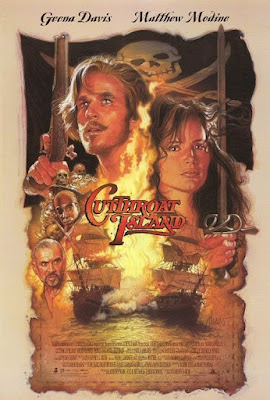 I hate to admit it, but the only reason I stayed away from this film was all the bad word of mouth and negative press upon it's original release. It didn't help either that it would ultimately go on to become one of the biggest box office disasters of the century, resulting in the downfall of Carolco Studio's. Nevermind the fact that I actually really loved Renny Harlin's work as a director back then. No sir, I jumped on the bandwagon and as a result, I never saw this film until now. After finally having seen it, one thought keeps running through my mind. "What an idiot I've been".

Despite all my dumb unfounded reservations going in, Cutthroat Island manages to be hands-down one of the most fun experiences watching a film I've had in a long while. Sure I see great films all the time, but it's rare when one can match the sheer budget, spectacle and talent that easily makes this one of the best pirate movies ever made. And I'll be honest, I'm not much of a fan of pirate films. I have seen the first Pirates of the Caribbean, but I quickly learned these types of films are just not for me. So I suppose that could be another reason I stayed clear of this one for so many years. So imagine my surprise to discover that I really, really loved this one. 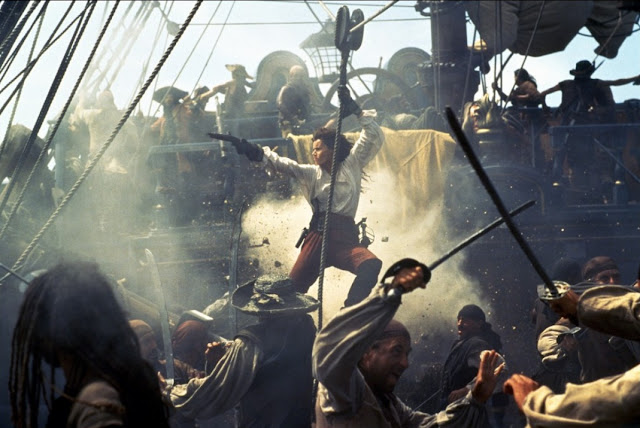 While it's easy to point figures and nitpick why this film did so terribly at the box office, none of them can excuse it's poor performance, when the reality is that it's quite an entertaining big budget spectacle if there ever was one. And it's all put together like a pro by director/producer Renny Harlin, here doing far more than he's ever proven behind the camera up until this point and since. If there was ever a film that could define just what a director could do with a massive budget, practical effects and stunts and a whole lot of talent, it's this film. Though most would probably consider Die Hard 2 (my personal favorite in the series) his highlight in terms of production, I have to give it to Cutthroat Island just in terms of it's sheer massive audacity. It's truly a sight to behold and when you watch films like any of the PotC for example, this film proves how much harder and just flat out better it was over 20 years ago, when CGI wasn't readily available and they had to do everything practically.

Again, this is all coming from someone who generally doesn't like pirate films, but you just can't deny the excitement, fun, thrills and insane stuntwork provided by Harlin and company with this one. And while there are a scene or two where it's obvious Geena Davis' face has been superimposed on a stunt actress, there are other moments where she's obviously doing the stunts herself and it's mindblowing. Same with Mathew Modine, who also jumps smack into the action himself flying by rope from one ship to another and it's damn impressive. Again, these swashbuckling films aren't for me, but I just couldn't help but have an absolute blast with this.

Is it perfect? No, but it doesn't have to be. Honestly, I only have one single complaint, and it's with the casting of Davis and Modine. Geena Davis is a fine actress, but she seems ill-fitted for the role and just doesn't sell it that well. Yes she handles the physicality of it and never phones it in, but she just doesn't come across as a natural badass. I don't know, there's just something missing and she never quite hits those beats. Mathew Modine comes off much better. While it does take a little bit to get used to seeing him in this kind of film, it's soon apparent that the guy can deliver, and you know, he's likable and charming and it works. And then there's the legendary Frank Langella, who steals the show as the villain, channeling some serious Skeletor vibes a la his turn in Masters of the Universe. So good.

I don't think all the negativity against this film from the onset is fair at all, or even justified. I think you'll find that this is in fact a very fun and well-made film. It's exhilarating, exciting, beautiful and most importantly....fun. Just the visuals alone, courtesy of director Renny Harlin and Cinematographer Peter Levy (Predator 2, Ricochet) will floor you. Though he had already changed his visual style with his previous film Cliffhanger, he would go back to his more signature style that he delivered with Cinematographer Oliver Wood on his classics The Adventures of Ford Fairlane and Die Hard 2 for this film, and the results are incredible! Despite the fact that this was a blast from start to finish, my eyes were glued to the screen and my mind blown by what I was seeing, things achieved practically, on such a grande scale, and somehow, people lost sight of this fact and for reasons I don't understand, this film tanked. Instead of being heralded for it's competently brilliant film work, it was crucified both critically and by it's box office. Too bad, because it was quite an excellent film full of surprises. 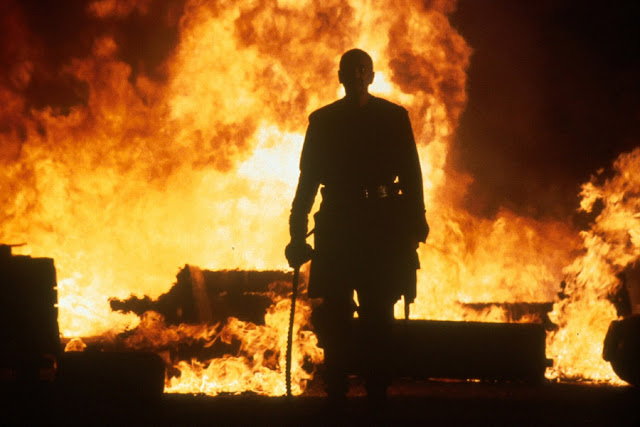 The action needs to be seen to be believed. The action sequences presented in here are nothing short of spectacular, with each new one blowing the previous sequence out of the water....literally. The pyrotechnics are insane, with explosions galore left and right, bodies flying, cannon's bursting, ships exploding and guns blazing. But while they're all pretty great, none of them beat the last act, where 2 ships pull along side each other and proceed to blow the shit out of each other, all while hundreds of extras battle to the death using swords, guns, knives and their fists. It's some of the most impressive technical achievements ever put to film, and I just can't stress enough how much of this goes to Renny Harlin's eye. He was on fire here, and though his next film, The Long Kiss Goodnight (1996) would mark the end of his winning streak just a year later, we at least have a handful of classics that have endured the test of time, and that we can learn to rediscover and appreciate all over again.

If there was ever a film that taught me never to judge a book by it's cover, or to heed negative word-of-mouth, it's this one. Despite all the chips stacked against it, Cutthroat Island manages to be quite frankly one of the best action adventure films ever made, and one that needs to be experienced if you've never had the pleasure.

How to see it:
Currently on Hulu Plus in HD, and available from a variety of releases on both DVD and Blu Ray for very cheap.

Posted by robotGEEK at 3:07 PM