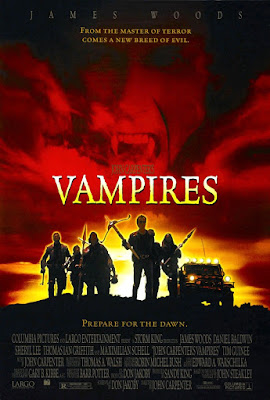 Vampires is a very unique picture to say the least. It came at the tail end of what Carpenter could offer in terms of his signature style, and honestly, it's his last good film because the one following this would be the trainwreck Ghosts of Mars, which would signal his semi-retirement from directing feature films for many years. Oddly enough, another one of his worst films, Escape From L.A., was made right before this one, so here you have a pretty decent and good looking film sandwiched between 2 of his worst. Crazy.

Jack Crow is one of the best vampire hunters left. Raised, trained and employed by the Catholic church to hunt down and destroy vampires, things begin to take a nasty turn when a new more powerful and unstoppable vampire emerges.

I really enjoyed Vampires, but I didn't love it. There are things that work and things that don't, but either way, it's far better than his next effort, Ghosts of Mars, so it at least has that going for it. For me, the best thing Vampires has to offer is James Woods in the lead. He's just such a badass, even though nearly everyone else towers over him. And I loved that though he's older in age and smaller in stature, just putting him in some jeans, a leather jacket and a black t-shirt and sunglasses instantly makes him a badass. Or, at least the costume department tries by taking this approach. As a film, Vampires tends to drag quite often, but the eclectic and very 90's cast of character actors give the film a significant push, even though most of them don't last very long. On the plus side though, I'm thankful that it looks like a John Carpenter film. He makes the film look good for the most part, and uses an array of lens tints to give the film a western vibe, which mostly works. Still, even with all these things I liked about it, it never quite hits the mark, always leaving you feeling like it's missing something.

I loved that the main villain was Thomas Ian Griffith (Excessive Force). I just love that guy, and though he's mainly associated with the action genre and playing the lead in low-budget films, it was a spirited choice to have him play the lead vampire in a horror/western. He doesn't really get to stretch his acting chops here, and looks more like a goth than a vampire, but he does the most with very little and makes it memorable. Still, it woulda been cool to see him randomly throw in some martial arts, but that's just me.

Released in 1998, Vampires came at a time when Carpenter just couldn't deliver a solid hit. After a string of box office duds (Memoirs of an Invisible Man, In The Mouth of Madness and Village of the Damned) - all films I happen to really love by the way and feel don't get the credit they deserve for being well-made entertaining films - Carpenter went back to his one of his classics to make the sequel Escape From L.A., which was another huge misfire, splitting people right down the middle. I personally can't stand it and struggled to finish it the last time I watched it. But Vampires was a nice return to form for the guy and end up being his only solid hit in the 90's. Unlike Escape to L.A., no CGI was used, and this time employing the specialties of effects artists KNB Effects Group, giving the film a more solid and classic Carpenter vibe, which was a bit refreshing.

I can't say I loved Vampires, but I really enjoyed it. It never quite hit's a home run, but it's certainly entertaining and though it drags from time to time, there's enough to like in the visual eye candy and excellent casting to keep you invested.

How to see it:
Currently, it's available on Hulu Plus, which would really be the best way to go since it's in HD. You can also pick it up on DVD, but be warned, the picture quality is pretty bad. Twilight Time recently released this on Blu Ray, which goes for insane money right now on the secondhand market. You can also stream it on Amazon. 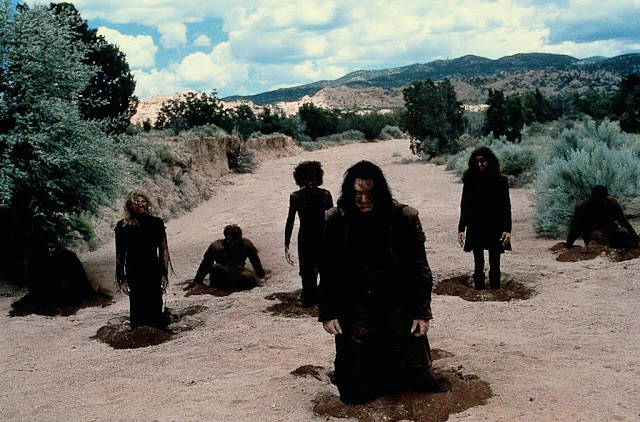 Posted by robotGEEK at 3:45 PM