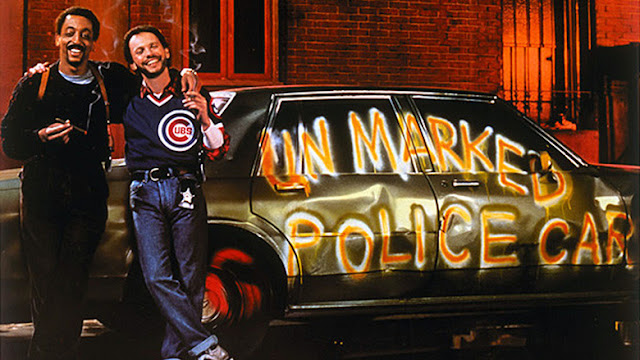 I remember this one vaguely, but had always been meaning to check it out again because Peter Hyams did this and while he's had a hit or miss career, he has made a couple of really good films. Plus, an action comedy with Billy Crystal and Gregory Hines as cops in the 80's? Throw in a cheesy Michael McDonald 80's hit and dude, I'm sold!

This was a lot of fun, especially on a day when I couldn't seem to find anything to watch that I was in the mood for. A solid cop/buddy action/comedy from the mid 80's with a really high entertainment value. Here, Crystal and Hines play two wise cracking Chicago cops who have a smart ass answer for everything and who seem to be inseparable, even in there daily lives outside of work. I mean, they should just be a couple because that's how close they are. They're in the midst of bringing down a ruthless up and coming drug lord named Julio Gonzalez (Jimmy Smits), and after successfully capturing him when some rookie cops who had been undercover infiltrating his organization couldn't, they are forced to take an extended vacation to Florida so things can settle down. After loving the life in Florida, they decide they are going to retire and open up a bar over there. When they return to Chicago to tell there boss they are done, they learn that Gonzalez has been released from jail and is walking free. They decide that they just can't let this guy roam free knowing that whatever he's doing, it's sure to be illegal so they vow to track him down and lock him up for good before they turn in there walking papers. Only Gonzalez seems to have the upper hand this time sabotaging them whenever they think they are getting close and when Gonzalez kidnaps Costanzo's (Billy Crystal) ex-wife, then it becomes personal and Costanzo and Hughes (Gregory Hines) will stop at nothing to bring him down.

Crystal and Hines chemistry is purely evident, but I think a lot of what Running Scared has going for it is director Peter Hyams direction. The guy has proven in his long career that he can shift styles and genre's from film to film, to varying degrees of success. This one, for the most part, is definitely a winner though and I had a lot of fun with it. I've seen Hines in a few action oriented roles before, but for me watching Crystal play a cop and even get serious from time to time was a hoot. The end is where he really delivers in the serious cop role though, and I loved every second of it. I think it's just because it's something I've never seen him do before, play a cop in  gritty film. Yea, he's a wiseass most of the time, but when they involve his ex wife, his attitude shifts and he'll do anything he can to get the job done without involving the cops. And after seeing this, especially in some of the scenes at the end when things turn deadly serious, I wish Crystal would have taken on more roles like this. It was a surprisingly nice departure from his usual stuff.

I think what also makes Running Scared so successful is that it works on two different levels. There's enough solid action to satisfy an action fan, and there's enough comedy if that's what you're looking for. Me, I would have liked it to lean "more" towards the action because it was done so well and when the shit hits the fan, I just wanted more and more of it. Hyams has a gift for filming this stuff when he's firing on all cylinders and he pulls off the action and a really cool car chase really well.

Sure, I had a few very minor complaints about it, but honestly not any even worth mentioning. This was definitely a blast from beginning to end with plenty of action and comedy to make it worth your while. Throw in a cheesy montage of Crystal and Hines living it up in sunny Florida to "Sweet Freedom" by Michael McDonald and well, you're just gonna have a good time.
Posted by robotGEEK at 10:16 AM