Halloween 6: The Curse of Michael Myers 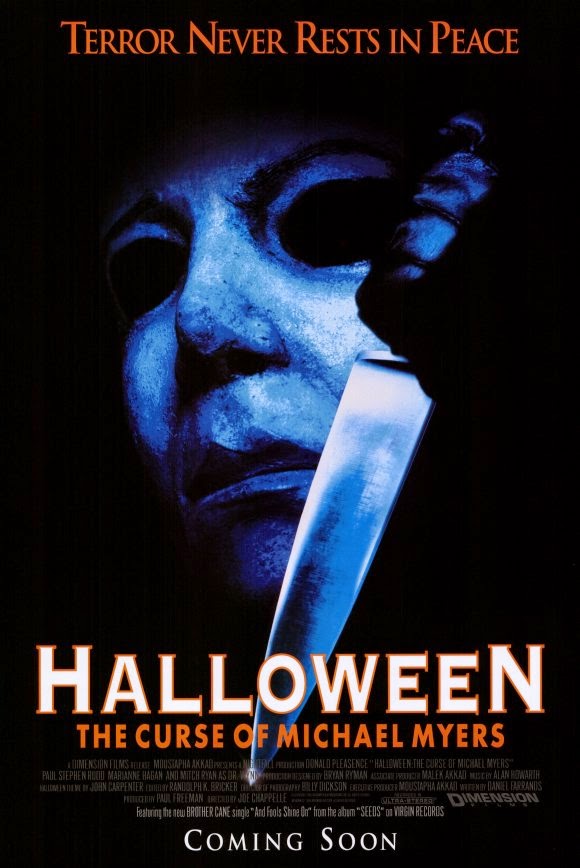 * Just wanted to take a quick moment to apologize for the delay in getting anything new posted. I went on a week long vacation across the U.S. visiting family and am only now getting caught up on life and most importantly, movies and movie reviews. Here's the first of a whole new batch that I will be posting within the next few days so keep an eye out!

Considered by most to be the worst film in the series (which I personally don't agree with; For my money, it's definitely Part 5), something really surprised me as I sat down to watch this. I didn't really hate it as much as I was expecting to. But wait, before you lose your shit, hear me out. Yes, it's terrible. In fact, they all are after 1988's Halloween 4: The Return of Michael Myers, which itself wasn't all that great. Every Halloween film between 1988 on sucked until Rob Zombie's reboot in 2007. While many do not like his take on the franchise (I personally LOVE them), they're leaps and bounds better than any Halloween film in the last 26 years. But here's the thing. With this film in particular, while I didn't like it at all, I didn't really hate it as much as the previous film, Halloween 5. That, to me, was a travesty in the horror genre, let alone the Halloween franchise. I'm still surprised that Part 5 doesn't get nearly as much shit as Part 6. But I digress.

I think what surprised me the most was that while nothing in this film is plausible, and the story is just so fucking stupid, it does feature a few minor positive attributes that raise it a few levels above Part 5. For instance, while Joe Chappelle wouldn't be labeled a stylish director, this film looks a helluva lot better than the low-budget made-for-tv looking fiasco that Dominique Othenin-Girard implored in the last film. What a lazy fucking mess that was. And better yet, Michael looks much more badass this time around compared to Part 4, which is weird considering it's the same stunt guy they used in his least threatening role in Part 4: The Return of Michael Myers. That would be stuntman George P. Wilbur. If you recall, his appearance as Michael back in '88 for Part 4 was almost laughable. Tall, skinny, with painfully obvious shoulder pads underneath his jumpsuit to make him appear bulkier, it was at times almost too much of a distraction for me to enjoy. But it seems they learned from their mistakes and used something like football pads this time around under his jumpsuit, which looks much more natural. Too bad they didn't use Don Shanks again, who played him in Part 5. I thought he was great.
Oh, and while we're talking positive's, I found the endless barrage of shots of Michael Myers roaming, walking, stalking and standing quite refreshing. Sounds odd, but you'd be surprised to find out how little of that there was in the last 2 films.

Now that we're done glowing over some minor details, let's get down to the thick of it. This film is terrible. Now, bear in mind I have yet to see the famous Producer's Cut, I base my feelings solely on this experience, the theatrical cut. It's terrible, made only slightly tolerable because of some actual skill behind the camera and lots of cool Michael Myers walking around shots. But still, the whole concept is........ridiculous. Seeing as there was only a year apart between Parts 4 and 5, yet it took them 6 years to come up with this entry is concerning, because it's just not very good. 6 years and this is the best they could come up with? Though I have to give them props for sticking to a storyline, in this case the Thorn Druids storyline, that was initially hinted at in Part 4 and more so in Part 5. At least now I know what the fuck the man in black from Part 5 was all about. And remember earlier I mentioned how nothing that happens is plausible? Here's a good example of what I'm talking about. There's a scene where Tommy (Paul Rudd) walks into a bus station. A bus station full of people mind you. After asking about the schedule, he sees a trail of blood leading into the bathroom. Why nobody else doesn't seem to notice a trail of blood is beyond me. So he follows the trail into the bathroom, where he finds Jamie's newborn baby hidden under the sink. Um, sooooo somehow so many hours have passed and not one single person noticed A) a trail of blood leading from the phone booth through the bus terminal and into the bathroom, B) a crying baby that was hidden underneath a sink, C) a weird man walking out of the bus station cradling a baby that he clearly wasn't holding when he first entered the bus station. That's the kind of stuff you're in for with this film.

Due to money issues, Danielle Harris did not return in the rather small role of Jamie Lloyd, this time around. Even though it was a minor character in this particular film, just for familiarity's sake, it would have been nice to see Harris reprising the role that she's most famous for now. Instead, we got someone else who I found to be slightly annoying and who looks or acts nothing like the previous incarnation of the character. So much so that since I kind of ignored the whole voice over narration during the opening credits that explains pretty much everything that the film is about, I had no idea that that was even the character of Jamie until much later on. And that says a lot about this film. If you don't listen to Paul Rudd's voice over at the beginning basically explaining everything that you need to know, you'd be lost if you just decided to watch the film without it. Call me crazy, but that's never a good sign. As the film progresses though, the performances are all fine, a very young Paul Rudd (the guy doesn't age!!) included. Nothing to really complain about in that department, unless of course when it comes to Donald Pleasence as Dr. Loomis. Again, annoying, hammy, weird. It's just so odd, like the guy has never acted in a film in his life. Reports state that director Joe Chappelle felt the same way and limited his screentime significantly.

If you follow the Halloween films, then you know with Parts 4, 5 and 6, they center around the Thorn curse. Basically, a group of evil druids have been protecting Michael all these years, and it's this Thorn curse that drives Michael to seek out and kill every last living relative in his bloodline. He's also somewhat controlled by these druids. They are the ones who busted Michael out of jail in the end of Part 5, and they also kidnapped Jamie and held her prisoner all these years. When she gives birth to a child, she escapes with the help of a sympathetic nurse. So now we have a new member of the Myers family that Michael has to...............honestly, if I had cared enough to pay closer attention I could get deep into this whole storyline but I don't so I won't. It's silly, and a lame excuse to try and explain why Michael does what he does. I don't really need a reason. He's evil and feels the need to kill his family and anyone who gets in his way. That's good enough for me. To round things out, Paul Rudd plays Tommy Doyle, the little boy Laurie Strode (Jamie Lee Curtis) was babysitting in the first film. He's still a neighbor of the old Strode house and his experience all those years earlier has left him somewhat odd. Having become obsessed with the Myers legacy, Tommy sets out to help put an end to the curse once and for all.

I have every intention on checking out the Producer's Cut, and with the new Blu ray box set that just came out, I will finally be able to. Perhaps that version will strike a stronger chord with me than this one did. Despite all of it's faults and the ridiculous storyline, I have to admit that it does possess an old school charm that keeps me from hating on it completely, because I'd gladly re-watch this over Part 5 any day of the week. Technically a 90's film, it feels more like an 80's horror film, and for that, it scores a few points.

Posted by robotGEEK at 3:32 PM