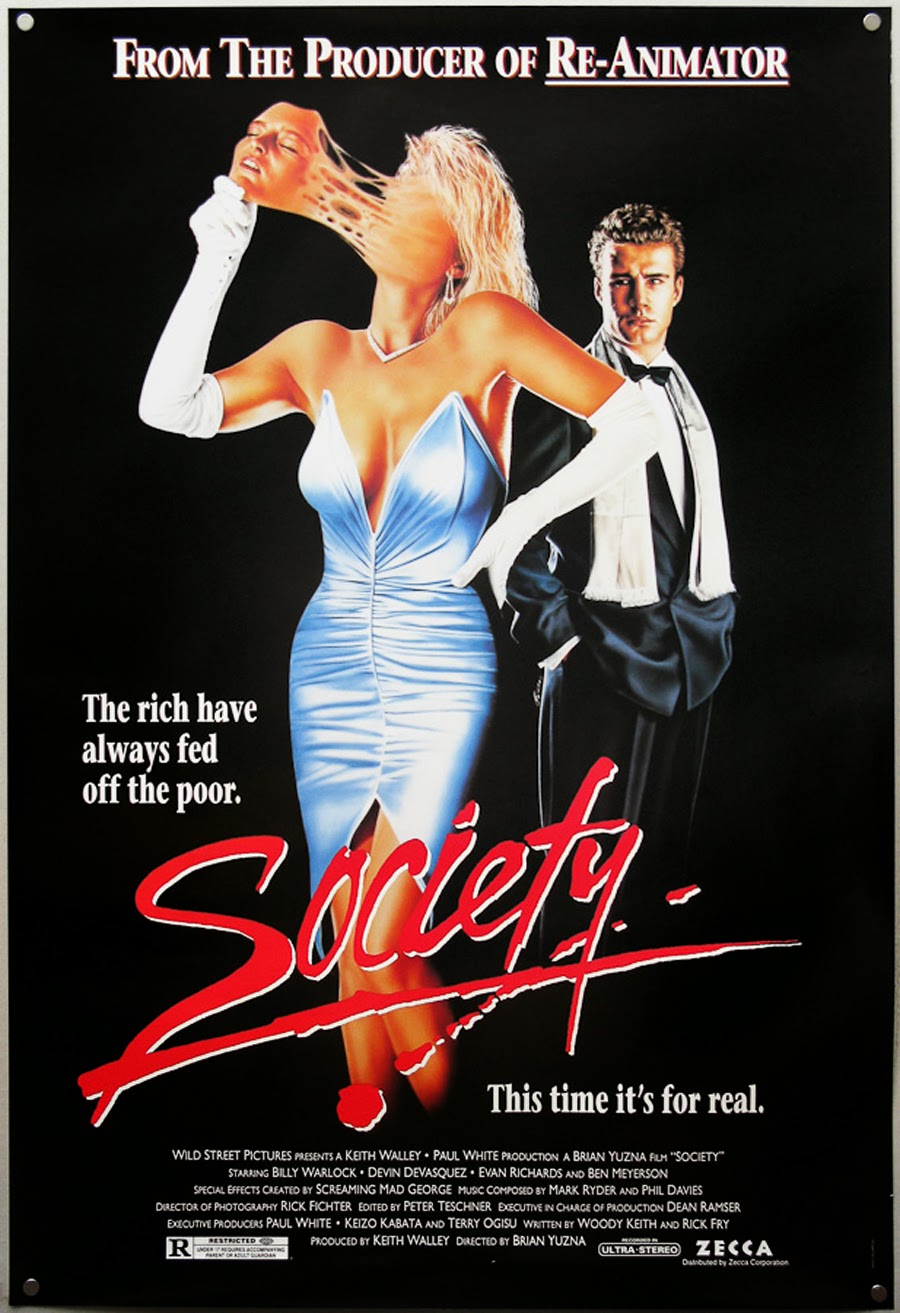 I have been hearing about Society for about as long as I can remember. A somewhat difficult film to come by, it's amassed a rather large cult following since it's initial release in 1989 and since then, has only received a single DVD release. That release, whether deserving or not, can go for big money on the internet, which makes it somewhat difficult to get your hands on especially if you're not even sure if it's going to be any good. I was intrigued though, mainly by it's subject matter and the production behind it.

Let's get down to the nitty gritty. Society is the directorial debut of prolific horror producer Brian Yuzna (Re-Animator, From Beyond, The Dentist) with insane practical makeup effects by Screaming Mad George, who's worked on everything from Predator, A Nightmare on Elm St. 4 to Freaked and Guyver. It's a story about a teenager who feels alienated and lost in his rich Beverly Hills environment. When his sisters ex-boyfriend turns him onto the idea that things are not what they seem in his life and with those around him, he begins to notice things that will disturb him, and as he falls further down the rabbit hole, everything he thought he knew will come into question in the films stunning climax.

With as big of a cult status as it's got, I really didn't find Society to be all that great. I found that it really needed to rely on it's shocking ending to put any real stamp on the film or genre, and in that aspect, it does, but only marginally. It's an interesting story, and while Yuzna and the effects department do offer a few tidbits of what's to come throughout the film, I found most of it to be pretty uninteresting. For a film that is revered for it's practical effects work, you hardly see any of it until the last 30 minutes. When we do get to that "shunting" money-shot conclusion after what feels like forever, it's really more bizarre than disturbing.

As a whole, I found Society to be peculiar. I'm not sure entirely what I was expecting, but regardless, Society is NOT a horror film. It's definitely a satire, with a lot of social commentary mixed with some surreal elements, but overall it's a mixed bag. The fact that it was made in the late 80's helps tremendously. The decor, set design, ridiculous haircuts, and terrible fashion sense speaks volumes about an era that I love, and if it wasn't for these trivial things distracting you visually, Society would be a bore. The problem is that going into this, everyone knows something big is going to happen; it's reputation relies on it. It just takes a while to get there. When the WTF?! climax does come to pass, it's so-far-out-of-left-field sequence, while impressive on a technical level, does nothing to really end the film on a high note. Despite the big reveal, nothing is explained and you still don't know why or how it happens.

I know some enjoy it, but I will probably never watch it again. Kudos to Brian Yuzna for making something ballsy. His decision to not use blood in the film made sure that a lot of the "shunting" sequence stayed in tact, and for that, I admire the guy. Overall though, it wasn't the film I was hoping for.