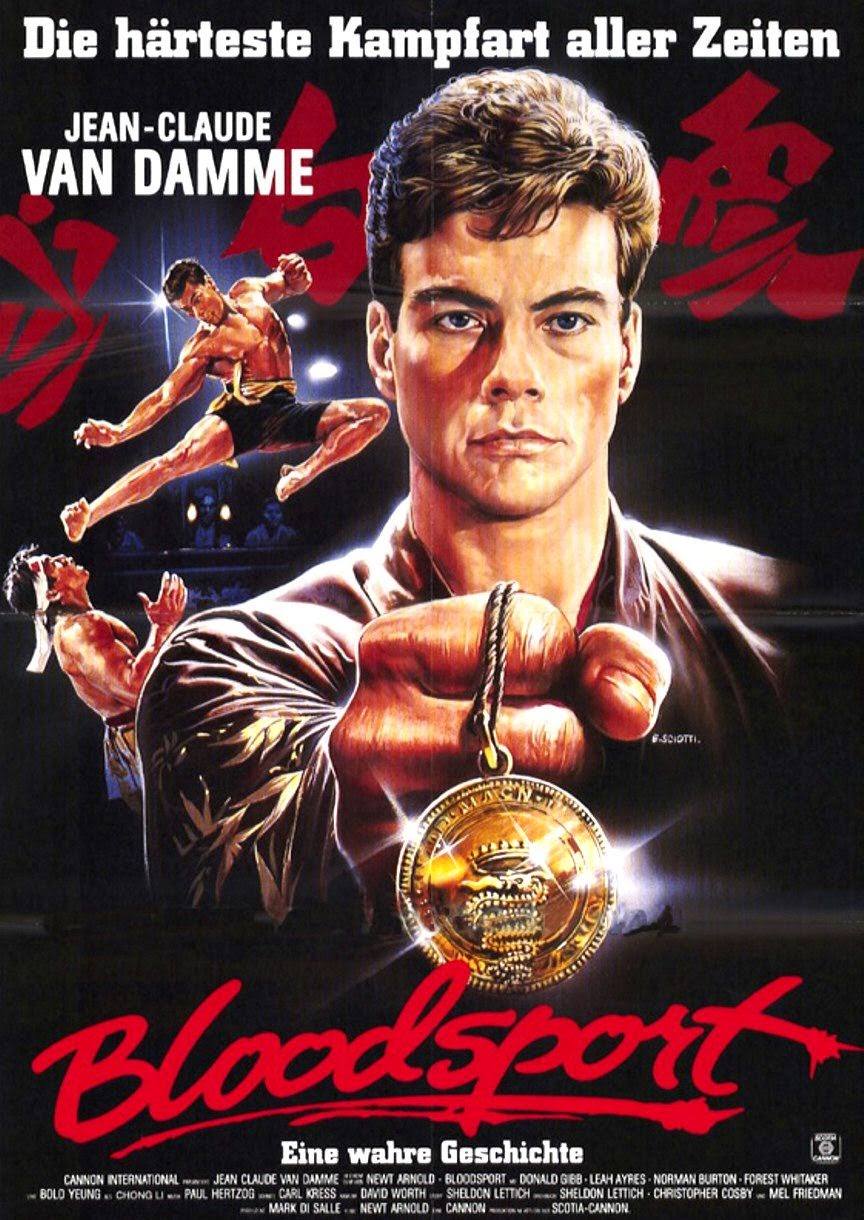 It's almost shocking to learn that as big a Van Damme fan as I am, I've actually never seen Bloodsport, his first solo starring role, until now. I don't know, something about it never appealed to me and so I never really made much of an effort to check it out. Pity too, since it's actually rather enjoyable in a cheesy low-budget kinda way.

Most would consider this their first foray into Van Damme's filmography. However, for me it's No Retreat, No Surrender, one of the first VHS tapes I ever made a copy of. My first Van Damme "starring" film experience would be Cyborg, which came out the year after Bloodsport. Though if you want to get technical about it, it's Bloodsport that became Van Damme's first headliner.

Bloodsport, along with others during the heyday of the competition films like Kickboxer, Don "The Dragon" Wilson's Bloodfist series and Lionheart, are the perfect example of the kind of martial arts film they don't make anymore. You know, the martial arts competition film. I guess you can say Keanu Reeves tried recently with his directorial debut Man of Tai Chi, but sadly that felt a little flat and uninspired to me. So it was refreshing to see a film from this often forgotten sub-genre that felt new. Well, it was new to me since I'd never actually seen it before. But more than that, it was a reminder, or kick in the ass rather, that I should seek out some of these long forgotten gems.

Bloodsport, based on a true story, stars Jean-Claude Van Damme as Frank Dux, a guy who abandons the army to go fight in the Kumite, the ultimate martial arts tournament in Hong Kong. There he buddies up with an American fighter named Ray Jackson (Donald Gibb-Ogre from Revenge of the Nerds), and an American female reporter eager to get the scoop. Hot on his trail though are two army officers (one of them being a young Forest Whitaker) hell bent on bringing him back home before he gets a chance to reach the top and fight the reigning defending champion Chong Li (Bolo Yeung), who has no problem killing his opponents during competition.

One of the things I remember when I first discovered Van Damme in Cyborg was that he wasn't a very good actor. Hell, he's not even a decent actor. I know that sounds harsh, but at least in Cyborg, it's partly true, which may explain why he hardly says a word in the entire film. While some of his delivery in Bloodsport is not very good, it's not necessarily terrible either. Compared to Cyborg though, he's got a lot of dialogue to get through and I have to give him credit for mostly pulling it off. But the fight sequences are the reason we're even watching this film to begin with, and in that department, Bloodsport delivers the goods in a classic old-school way. What does that mean exactly? Well, lots of slow-mo, lots of carefully choreographed kicks, lots of slow-mo screaming, no wires, and lots of stable camera shots. Basically all the shit you don't see in martial arts films anymore. Why you ask? So that you can't tell that the actor is not the one doing most of the fighting himself in modern fight films. Quick-edit/shaky-cam nonsense easily being the number one thing to mask that in films these days. The nerve!

I've said it before and I'll say it again; Van Damme makes a great villain. I only mention that because while he's never been a great actor, JCVD not withstanding, he's able to carry a film well enough with his good looks and charm and simply because of his kickboxing abilities, sometimes that's good enough. He's certainly gotten better and more comfortable with each successive film, with the Golden Age of the Van Damme filmography (1989-1995) being his best output. But when he's playing the villain, it's almost as if a light switch has been flipped, and for some odd reason, he's a much better actor when he's playing the bad guy. Enemies Closer, Expendables 2 and even No Retreat, No Surrender are prime examples of that, with his role as the Expendables main villain easily being the best part of that lame film.

I feel like I should give the guy some credit though, because despite his troubled past, some props are richly deserved. Jean-Claude is one hard worker; the guy never rests. Even back when his fame waned and he was in the middle of a drug addiction (clearly evident in films like Maximum Risk) and we kind of forgot about him, he worked consistently, sometimes even knocking out several films in a single year. And he doesn't give up. JCVD is considered the Van Damme resurgence, yet he never really went away. He's never stopped working, even turning out another DTV action flick the same year JCVD came out called The Shepard. I think we just kind of forgot about him, and JCVD was just the thing we needed for several reasons; 1) To remind us that he was in fact still around, and 2) To show us that Van Damme has indeed gotten better acting-wise in his old age. Sure, he won't churn out anymore full-on martial arts films, which is a shame - instead focusing on direct action - but the guy is good, consistent and most important, passionate about what he does.

It's easy to tell Van Damme is new to the game in this. While he doesn't blow anybody away with his acting chops, thankfully he's got a good, and rather large supporting cast to help things move along nicely. And the seemingly endless barrage of fight scenes are staged and executed well enough that while there's nothing about this film that feels new or fresh, it's easily enjoyable as an old school martial arts film. I enjoyed the hell out of it because it's a simple film, with a simple premise, and a likable lead that can do some amazing shit with his legs.
Posted by robotGEEK at 7:22 AM