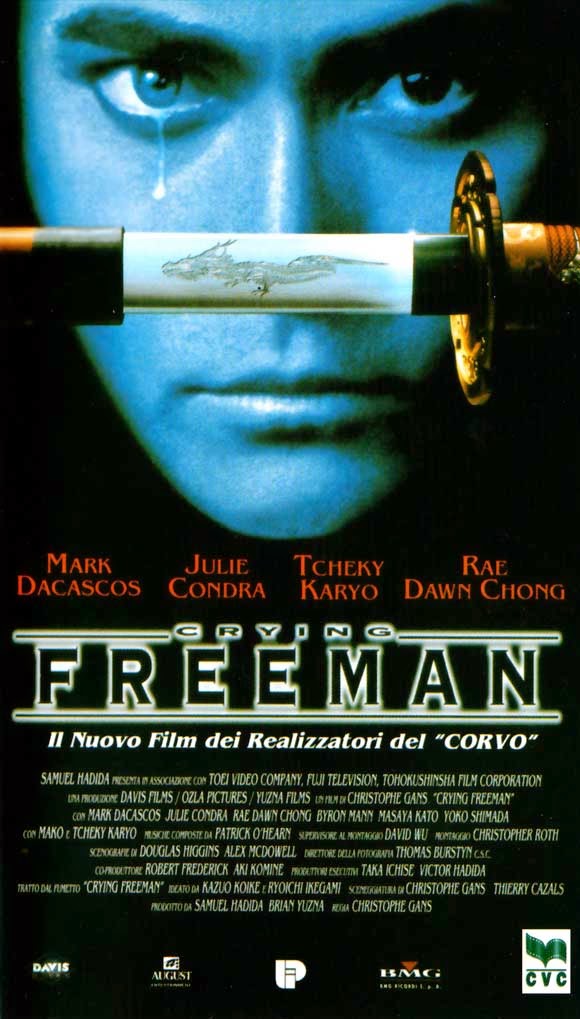 I first became aware of French director Christophe Gans when Brotherhood of the Wolf hit the US market and became an underground cult hit. Only after seeing this did I learn that this wasn't his first film. Apparently his first film was a live action adaptation of the super popular Crying Freeman series. This surprised me for three reasons; 1) That a French filmmaker chose this to be his first feature film. 2) I had no idea there was even a live action adaptation to begin with, and 3) Why the hell hasn't this ever been officially released in the US?

Crying Freeman was just about as awesome as I was hoping it would be. Cristophe Gans is a classy director, and much the way I felt when I first watched Brotherhood of the Wolf, Crying Freeman is a visually brilliant film. Before I sat down to watch this, I read some reviews for it and it was surprising to read that most of them were not very positive. Now, I've never seen the anime, and so I base my experience purely on watching this as a film, rather than an adaptation of something else. I don't know the whole backstory on this character or that particular world, other than that he's an assassin who sheds a tear every time he kills someone.

On a technical level, Crying Freeman boasts some really impressive achievements. Gans is one of the few directors left who direct films the way he does, with a constant fluidity that's both impressive and a breath of fresh air. Think a more stylish version of John Woo. I mention Woo because the many action sequences display a very John Woo vibe, only on a much more streamlined level. The action scenes are quite spectacular, and honestly, are some of the best I've ever seen on film that will rival any big budget Hollywood effort. But Gans isn't interested in just giving us another action film, and tries his hardest to make Crying Freeman bigger than that, and on that front, he also succeeds, because with all it's action, Crying Freeman is also a tale of a mans struggle to do the right thing in a world where his job is to basically kill people, yet after meeting a woman who he should kill, but for some reason decides not to, he sets off a series of events and choices that ultimately seal his fate in a world of honor. So in that aspect, Crying Freeman tries to be somewhat philosophical, displaying some impressive moody atmospheric tones that mostly work, if it wasn't for the often silly voice over narration.

One of the best things about this film is that it never strays too far in either direction. While it tries it's hardest to be a crime drama with some philosophical subtext, it knows very well that we are also here for some action and in both departments, it delivers wholeheartedly. Gans use of slow-mo is exquisite, and every fight sequence, sword fight and gun battle is like a ballet of imagery that never ceases to amaze and dazzle the senses. Sometimes the overuse of slow-mo can be jarring and annoying, but it works effectively well here, so I had no complaints in that department. Going into this I had some rather moderate, yet reserved expectations simply based on some of the negative things I read and also the fact that for whatever reason, it's never been officially released here in the states even though it's a good 20 years old now. I can easily say that Crying Freeman exceeded them ten fold and with it's very first sequence, all my fears were obliterated. I loved everything about this film; the look, the tone, the cast, the violence, the old-school choreography and fight sequences - it all comes together so beautifully. His John Woo inspired epic bullet-riddled, sword-yielding ballet of violence is pretty much flawless and is what makes this film such a standout and remarkable achievement in the action genre.

While the film's look and action sequences are great, the casting is a mixed bag. Mark Dacascos, always a welcome addition to any film, shines in the title role. Much like my feelings for Jeff Speakman, Dacascos deserves to be a bigger star than he is, and it's a shame that his most popular films (Crying Freeman, Drive) are actually hard to come by since they've never gotten full-on releases here in the states. While on the positives, I was happy to see Rae Dawn Chong on the screen again, but sad to see her leave so suddenly. It's almost as if she's just completely wasted in this, and that's a shame because the short time she is on screen, she's pretty great. The same goes for Mako. Much like his role in The Perfect Weapon, his appearance is great, but sadly brief. Then we get into the rest of the cast. Tcheky Karyo, who's most remembered for La Femme Nikita, is fine as a detective investigating the Freeman murders. Except, I can't understand why his voice is clearly dubbed, by Ron Perlman no less! Same goes for the female lead, Julie Condra, who plays the woman of Yo Hinomura's (Crying Freeman) affections. Her dubbed performance and narration is a bit distracting. What I can't figure out is why they chose to dub these two slightly minor characters and not even bother with the main bad guy, who's delivery is cringe-inducingly awful on the level of Tommy Wiseau (The Room).

Despite it's mixed bag of casting, which is mainly positive, Crying Freeman is an awesome and classy piece of action filmmaking. It's rare that I'm impressed as much as I was when first watching this, and that's a testament to director Christophe Gans talents as a visual filmmaker. It's a shame he takes such long gaps between projects. I'm hoping he'll step back into the action genre once again after sticking to horror and fantasy for so long.

Here's a quick bit of advice should you choose to track this sucker down. This film in particular is begging to be seen in widescreen. So if you come across it in cropped full frame, don't even bother, it won't even be worth it as so much of the film is gorgeously shot in a 2.35 : 1 aspect ratio, fully realizing the lush visuals that Gans and cinematographer Thomas Burstyn have come up with.