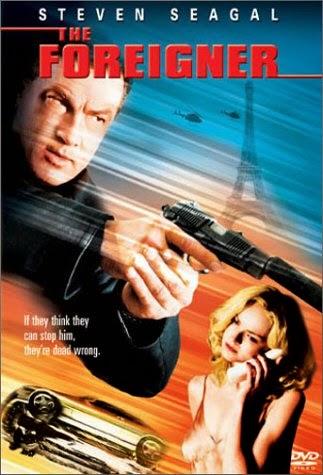 For all its lacking in budget, one thing that stands out almost immediately and sets this entry apart from most of his films is that right from the beginning, this sucker is oozing with style. In fact, you could say it's a little too stylish, because while most of it is pretty great, there are a few scenes here and there that come off as silly, but really, that's a minor complaint because this film does what 99% of his other films doesn't, which is that director Michael Oblowitz put some actual thought and technicality into every shot.

The Foreigner came out just as Seagal's film career dived head on into DTV territory. As you all know, a lot of these are not very good, with some of them just being flat out awful. The Foreigner, for all intents and purposes, shouldn't be as good as it is. A strikingly low-budget affair, with an overweight Steven Seagal not really doing much of anything, including his own stunts, except a lot of grimacing and an occasional gunfight here and there. I think I enjoyed this more than I should have. Nothing special by any stretch of the imagination, The Foreigner just seemed to pull off a few things that so many of his films forget to do, which is to entertain you with interesting characters, and give us some cool shit to look at.

Admittedly, there's not much hand to hand action going on in here. Sure he has a quick tussle or two (mainly utilizing stunt doubles unless it's a closeup), but honestly, there's not much in the fight department. But really, that's not something we come to expect from Seagal anymore, is it? He's always been more of a shoot-'em-up kinda action star, and in that department, The Foreigner only marginally delivers. Lots of gunshots for sure, but mainly quick shoot-'em-from-behind assassinations that doesn't give us any real big action sequences. But that's okay, because despite this, something about The Foreigner just gelled with me really well. The curiously international cast was pretty great, and the visual aesthetic was far and beyond better than I was expecting. There's lots of squib work going on throughout and Seagal is indeed a badass in this, easily making this one of the better Seagal films I've seen from his DTV catalog.

Now that I'm done sicking this films dick, let's get down to the problems I had with it. I think most will agree that Seagal's overuse of stunt doubles in the last 20 years is a little out of hand. Now, I haven't seen every single film he's ever done, but I can tell you that the ones I have seen that went DTV, so much of the action depends on the use of stunt doubles, which would be okay I suppose if they weren't so insanely obvious!! In this film for example, the double is at least a good 50 pounds lighter, and try as they might, they'll never find someone who can match his signature frizzy hair. It just gets a little silly when you're watching an action film where the action star hardly does any of the action himself.

I'm a fan of slow-mo, that's just what was the norm in martial arts flicks back in the 80's and 90's. If you really stop to think about it, it's rarely used anymore in the age of quick-edit movie-making. The Foreigner contains an insane amount of slow-mo, most of it unnecessary. So much in fact that you begin to wonder if it was necessary just so they can meet the minimum running time requirements. For the most part though, the slow-mo is used effectively well, but there is something to be said about having too much of a good thing. Then there are some weird and amateurish editing in some areas that kind of throw you off, especially in the last sequence, where all of the films style and creativity just kind of falls apart. But hey, their minor issues because most importantly, The Foreigner is a lot better than most of his films. The plot may be overly complicated and unnecessarily convoluted, but really all you have to know is it's just a lot of double-crosses and assassinations. Sure you can easily pick the damn thing apart with questions like "How did the story turn into a film about Seagal saving a woman and her daughter?", "Why does everyone only wear black?", "What's up with the ridiculous stunt doubles?", "How can people just murder each other in broad daylight and nobody hears or notices anything?", "Why is there so much slow-mo?", but who really cares?

Issues aside, there is something really cool about this film I need to bring up. One of the beauties of The Foreigner is that it displays some great old fashioned practical stunt work, meaning no wires or CGI, and that's just awesome. But the absolute best thing about this film is one sequence in particular that literally blew me away. In fact, as soon as it was over, I rewound it and watched it again, and then again in slow-mo frame by frame. I'm talking about an explosion sequence that is arguably the best practical effects explosion I've ever seen in any film. It's just fucking nuts and an amazing example of practical stunt work. Trust me, you'll know it when you see it. Everything about it is expertly choreographed and it's execution is just flawless and I still think about the logistics of that sequence and how the hell they pulled it off, and it just continues to blow my mind.

Not a lot of fighting, or shootouts for that matter, and the story may be a little too convoluted for it's own good, but it's stylish, with a lot of cool slow-mo, some great stunt work, and a pace that never slows down long enough to bore you. Plus, it's fun trying to count how many times it's not Seagal doing any of the action scenes by spotting the hilariously unconvincing stunt doubles for even the most minor instances. Not a bad way to spend an hour and a half of your time.
Posted by robotGEEK at 10:06 AM