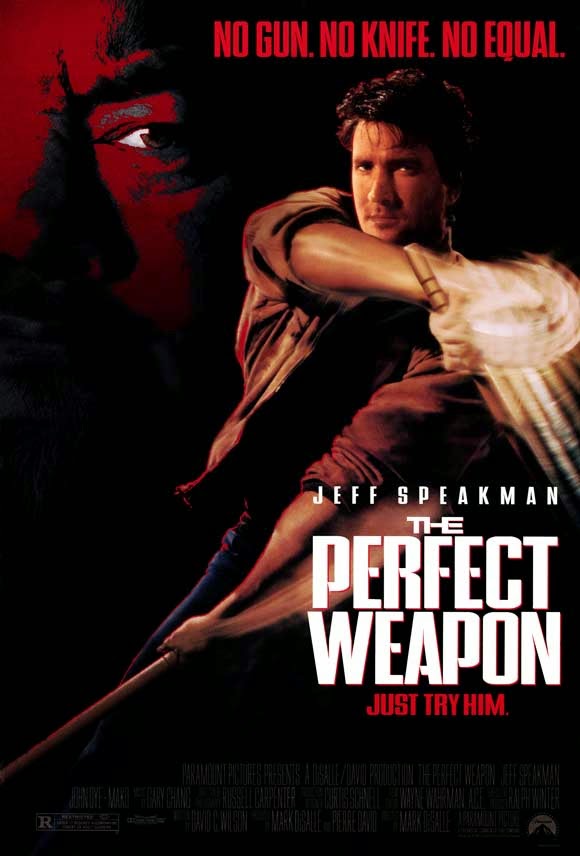 There's a reason why this film has always stuck in the back of my head after all these years. I couldn't quite put my finger on it, but after finally revisiting it in what seems like forever, I now realize why. The Perfect Weapon is hands down one of the best, most brutal martial arts action flicks to come out in the last 30 years. A solidly made effort that displays some of the best talent in the business of martial arts movie-making and a prime example of "if it's not broke, why fix it?".

Several thoughts ran through my head as I sat down to enjoy this immensely entertaining martial arts flick. 1) Jeff Speakman should have been a bigger action star, and 2) Why the hell isn't Mark DiSalle directing more action films? These are two very important and valid thoughts and when you watch this, I feel that you'll be with me on that. With my eyes glued to the screen as my testosterone levels roared into high gear with all the badassery on display, I began to realize that I remember more about this than I initially thought, which is a testament to it's power to entertain you, which also kind of blew me away since I hadn't seen this in 23 years. Yet as the stunning transfer on the Olive Films 2012 Blu ray release rolled, it all came flooding back.

On the surface, there's really nothing about this film that will make it any different from any other martial arts film that is trying to make a star out of it's first timer headlining a big budget studio film, hence my "if it ain't broke, why fix it?" comment. Jeff plays a guy who goes to visit an old friend, and who subsequently gets caught up in a Korean mafia feud. When his friend is killed, he sets out to seek revenge, clobbering anyone who gets in his way. There are no huge action sequences, but there are plenty of fights, and they are fucking brutal, expertly filmed by director Mark DiSalle, and utilizing every Asian bad guy you can think of who always popped up in martial arts action films back in the day. In this same period, Van Damme and Steven Seagal were going toe to toe at the box office, and Brian Bosworth was also trying to make a name for himself with Stone Cold the same year. But for some reason, Speakman never soared the way he should have, and I can't understand why. He's an amazing martial artist, with The Perfect Weapon proving he can certainly hold his own on screen against an army of bad guys, and who's surprisingly a good actor to his credit.

There is so much to love about this film, and there are plenty reasons why. I was surprised that Speakman is a natural actor, and a good looking guy. That's not easily done in these types of films, so it surprises me that people like Seagal - a one-note actor - can be 10 times more famous than this guy. I just don't get it. While we are on the subject of actors, I fucking love the character actors spread throughout this thing. Mako, James Hong, Cary-Hiroyuki Tagawa, shit, even Professor Toru Tanaka is in this and he's just about as badass as he could have possibly been. The film also boasts some impressive technical achievements like for one, there's no slow-mo. Every fight in this is fast, brutal and hard, utilizing Speakman's specific brand of martial arts, Kenpo. And holy shit is this guy fast and brutal. All the insane amount of hand to hand combats he faces throughout notwithstanding, just watch the scene where he's preparing to go to war at the end of the film where he practices by beating the ever-loving shit out of a couch for practice before he heads out the door. Just.......awesome.

The Perfect Weapon was directed by Mark DiSalle. DiSalle cut his teeth in the business as a sometime producer, having helped getting Van Damme's career off the ground producing Bloodsport, Kickboxer and Death Warrant, before producing two Speakman films until he went silent for 20 years in the film industry. In that same period, he only directed two films; Van Damme's Kickboxer in 1989 and then this in 1991. Can somebody please tell me why this guy isn't making more films? Or why he stopped directing with this Grade A masterpiece of martial arts action? DiSalle's restrained style of directing speaks volumes in the overall aesthetic, letting the action take front and center, but also giving us enough controlled directing that is simple, yet effective in the best possible way. And none of this is more evident than in the many, many fight scenes. Each punch, swing, kick and jump is fast, brutal, hard and loud, and insanely badass. Each fight is effective, choreographed and executed with precise precision. So much so that it almost saddens me to think how great a little film like this can be and how they just don't make them like this anymore. As a director, Mark DiSalle is a solid filmmaker, utilizing what he knows to make the best possible martial arts action film.

I think you'll all agree with me that a digital release of The Perfect Weapon has been long overdue. From what I can remember, it only ever came out on VHS and Laserdisc, and neither available in widescreen. In this day and age where everything is released on DVD, it's still shocking to learn that The Perfect Weapon, for whatever reason, was never granted even a sub-par DVD release all these years. It makes no sense and I can't explain it. But Olive Films were wise to this, and graced us with both a DVD and Blu ray release back in 2012. Sadly, there's no Special Features or anything on the discs, but what we do get is a badass and brutal martial arts/action film that deserves a much bigger reputation than it has, and just as important, it's finally available in widescreen. If I had a complaint, it would be that for a bare bones DVD and Blu ray, The Perfect Weapon is surprisingly pricey, but it's money well spent and totally worth the purchase for the amount of awesome you get in an hour and a half.

There's a scene in here that made me both laugh and appreciate how badass this film is on two separate levels. Jeff heads to a gym intent on getting some answers. But of course, nobody wants to help him. When he comes across a man who he thinks can help, the man brushes him off, telling him he's going to get hurt sticking his nose where it doesn't belong. Jeff pauses for 2 seconds as he sizes the man standing in front of him up before he says "I wonder if I can kick your ass?". Fucking. Brilliant. It was a reminder that there was a time when there were some true badasses in the world of cinema at one time. It all started in the 80's, but for my money, it was the 90's that totally encapsulated what it meant to be a badass in action cinema, and Jeff Speakman's The Perfect Weapon is a perfect example of that.
Posted by robotGEEK at 11:30 AM