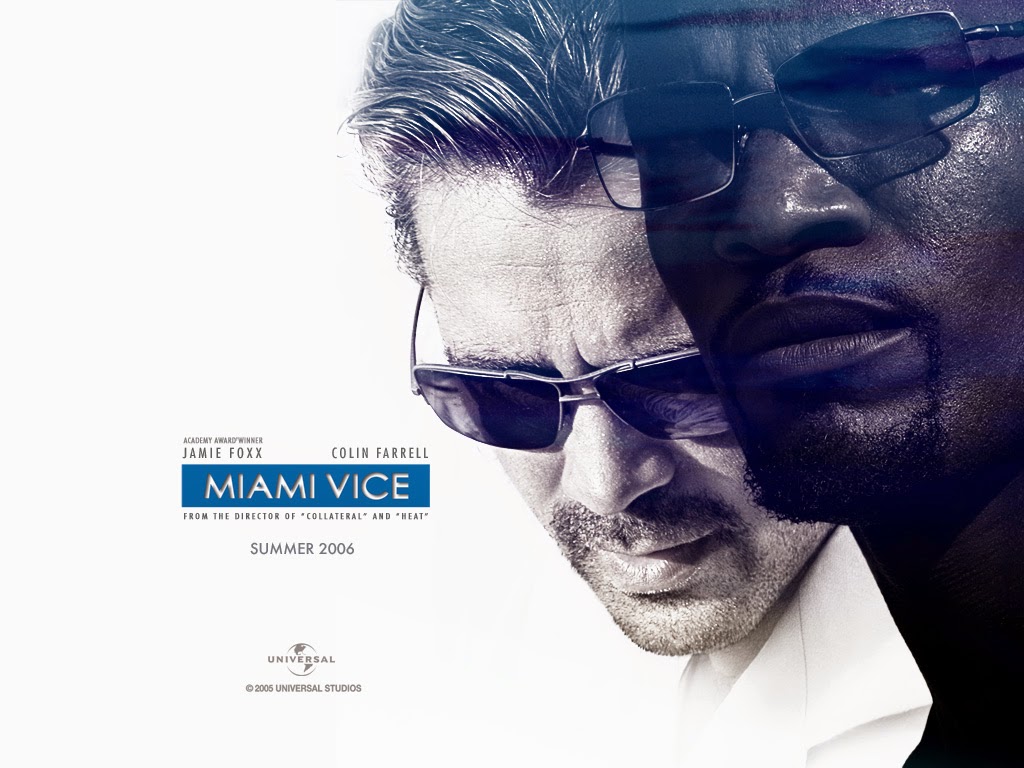 I don't think anyone expected Michael Mann's movie adaptation of his 80's hit television show to hardly resemble anything about that iconic 80's staple, but how much this film tries to distance itself from that show makes you wonder why they even called it Miami Vice to begin with. I can't remember the last time I was this disappointed watching an action film, or worse yet, watching a film directed by Michael Mann.

I consider myself a huge fan of Michael Mann as a filmmaker. His Manhunter is my favorite Hannibal Lecter film to date, as well as being one of the best, most stylish and coolest detective thrillers ever made. The Keep, when I discovered it recently for the first time, blew me away and remains one of my favorite forgotten gems in the weird/fantasy/horror genre. Heat, an equally engrossing action/thriller that finally combined the star power of both DeNiro and Pacino in a tour de force crime saga is about as intense and perfect as a film could get. But I think that's where my love for his films ends because soon after he did a few drama's like Ali and The Insider, before turning his attention to digital filmmaking and well, I'm just really not a fan of the style he's adopted with Miami Vice.

Now, I'm not going to hate on this movie because it bears no resemblance to the show that it's based off of, because even I know that trying to duplicate the look, feel and vibe of something as retro cool as the 80's version was a pipe dream. No, I'm not that naive. I've got other reasons to hate on this. In this version, the only thing that even remotely comes from the old show is the title, and the names of the two lead characters, nothing else, which begs the question, "why even bother calling it Miami Vice at all when you know it will be judged and compared to the series of which it's based?". Just call it something else.

All the things I feared going in came to pass as I watched this. By the time this film came out, I had pretty much lost any hope that Mann could deliver a solid sleek and stylish thriller the way he used to. Even going back to his roots with Miami Vice didn't excite me, which is why it took me this long to finally check this out. As actors, I like Colin Farrell and Jamie Foxx just fine, finding no real qualms about these two headlining this. In fact, with the exception of one actress (more on that later), the cast is fine. It's just pretty much everything else about this that makes it an over-bloated self-indulgent mess, and nowhere near as entertaining as it should be.

Let's begin. One thing you'll notice almost immediately after the first sequence has set you up for bitter disappointment, is that for all it's bells and whistles, a lot of the camera work feels shockingly amateurish. That's no exaggeration. I struggled with the fact that the one and only Michael Mann, a filmmaker I've respected for so many years, directed this mess himself, finding some small hope that maybe as the film progressed, some of his more trademark style would slowly ease into the film. Nope. With the exception of a well placed camera about once every 45 minutes, the entire film resembled more of an episode of COPS. That's the straight-up truth. I wouldn't call it shaky-cam, but rather just a lot of running around with a camera strapped to their shoulder not knowing where to point the fucking thing. What's frustrating is that even in the day and age of the shaky-cam/Michael Bay style of filmmaking, there's still better ways to do it than what they ultimately pull off here. Hell, Doug Limon utilized this concept exceedingly well in Edge of T......ahem, I mean Live.Die.Repeat., or whatever it's called now. And guess what? The same DoP shot both of these! But here, some of the edits and compositions just feel so.......amateurish. That's the best way I can put it. Yet, if you do some research you come to find out it was shot by Dion Beebe, who's actually turned out some excellent work, most recently with the better-than-you'd-expect Edge of Tomorrow. So what the hell happened here? Who knows?

When Michael Mann made Collateral, he began using digital cameras since the entire film was going to take place at night and he liked the way digital captured night shots. I'll admit, it's a much clearer picture than if he was using film. The only downside is that every once in a while, it almost looks like they're using a home video camera. With Miami Vice, he continues to implore this system and for a film that you expect to take full advantage of Miami's beautiful sun-drenched scenery, shockingly, most of it takes place at night, which makes no sense to me. In fact, a good half of the film doesn't even take place in Miami. In fact, until the final showdown comes into play at the very end, there's hardly any action at all. What Miami Vice does have is a whole lot of talking about stuff you couldn't care less about, personal relationships between Crockett and Tubbs and the women in their lives and a pace that literally runs all over the place to the point of exhaustion. What's worse is that you just don't care about anyone or anything in this. It's all alarmingly dull.

The soundtrack is terrible. I'm not gonna lie. Yes, I half expected the Miami Vice theme, or some iteration of it. Sue me. Instead we get a score that's as bland and uninspiring as could possibly be, and a soundtrack filled with hard rock songs by radio friendly rock bands I've never heard of. And he uses these songs to actually push the intensity of a lot of sequences, making the music front and center. It doesn't work. Some synth would have been nice.

Chinese actress Gong Li's place in this film is a mystery. Her character is a Spanish/Chinese/English speaking business woman in the drug cartel, who ultimately falls in love with Crockett. Her character, on paper, sounds like a breath of fresh air in a film filled with stereotypes. But there's a big problem here. First off, Li's English is not very good, nor convincing, yet her character is strong and stoic, which makes it passable. What the biggest problem here is that there is zero chemistry between her and Farrell. Mann tries his hardest to make us believe that these two are passionately in love, which is where a lot of the trouble, drama and danger comes into play, yet there's just nothing there. Even the romantic scenes come off as forced, especially when it looks like Gong Li has never kissed a guy in her life. She clearly looks like she doesn't know how to do it right, or convincingly.

There's nothing worse than being bored in a film that could easily have been a home-run. Mann is more than capable of delivering a solid piece of American crime drama. It's been his trademark for so many films, yet you'd think he never made one before this. Lots of anger, lots of jealousy, lots of double-crosses, lots of moodiness, lots of dreariness, lots of lives at stake, but no real heart. So much of the creative choices in here still don't make any sense to me. Why is most of it at night? Why is there no action? Why didn't Mann take advantage of the city's sunsets? Where are the bikini clad girls? Why no semblance of a theme, or a coherent pace? Why even call it Miami Vice?
Posted by robotGEEK at 11:05 AM