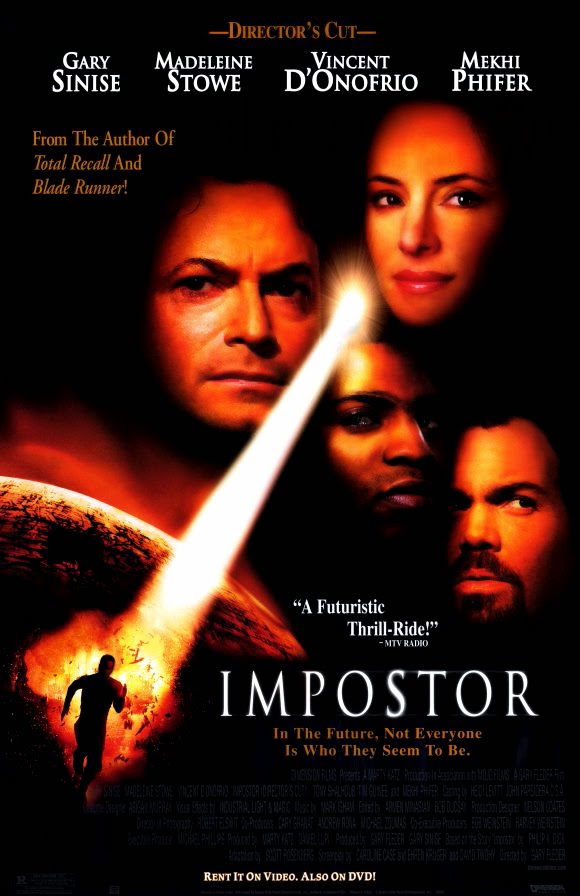 One of the things I love about watching films is going back and seeking out older ones that I've always known about, yet have never taken the time to actually check out. More often than not, it's these films that blow me away more so than big budget trite from that period. These past few years I've had the pleasure of discovering true gems such as Nighthawks, Internal Affairs, Exorcist III, Sorcerer, 2010, The First Power, and many others for the first time; films that seem to fly under the radar of most moviegoers that will undoubtedly leave a strong and lasting impression. Impostor is not one of those films.

Based on a short story by sci-fi god Philip K. Dick (Blade Runner, Total Recall, Minority Report) and directed by Gary Fleder, a guy mainly known for thrillers and a lot of television work, Impostor stars Gary Sinise in one of his only starring roles as a man who's accused of being an android bomb created by an enemy alien race and who sets out to prove his innocence after escaping a deadly fate.

Impostor is a completely missed opportunity, which is a pity since it's got great production value, some better than you'd expected special effects, a cast that can knock it out of the park in their sleep, and a decent enough storyline to keep you invested. So where's the problem? For my money, it's director/producer Gary Fleder, and one things shockingly apparent, science fiction is not his forte. What could easily have been a solid sci-fi thriller ends up being a Made-for-TV looking mess that bores you with it's bland and uninspired visual aesthetic. I have no doubt that Fleder can deliver a solid thriller, hell, he's made a career out of it, but set in the confines of a science fiction film, his talent (or ability rather), falls flat on it's ass.

Here's the thing. Had someone else been behind the camera, someone like saaaaaay Peter Hyams for example, this easily could have been a slamdunk in the science fiction thriller genre. Nothing that would have ended up being a blockbuster or anything, but a genuinely entertaining piece of sci-fi pulp. But that's not what we get. Instead, we get a film that's got some outstanding attributes for sure, but ultimately fails to stimulate one of the most important senses in a film for a moviegoer (the visuals), that it ends up being a bland and mediocre bore. I was so bored and uninterested throughout the entire film that I couldn't even bring myself to finish it, with only 30 minutes left to go. I just had no desire to waste 30 minutes of my life in something I had no interest in, especially when there are far better things to spend my time watching. I'm sure that comes off as somewhat silly to some, but being visually stimulated in a film is a big deal to me. A film can be boring, slow and virtually uninteresting, but if it at least looks good, I'll be invested. A good example of that would be my recent experience watching Alien Nation for the first time; a film that seemed generally lacking in almost every department, never quite going the lengths that it should or could have to give us the experience that you would expect from a film like that...........but boy did it look good. And again, as silly as that sounds, sometimes that's enough for me to enjoy a film.

What makes this more than frustrating is that while it's set in the future, it also plays out rather effectively as a straight-up man-on-the-run thriller, yet because of director Fleder's tepid direction, it comes off as dull. But what throws you off is how the film begins, with a short narration explaining what's been going on on planet Earth since we were invaded by a race of aliens. Some killer effects work and equally satisfying set design give you a false hope that we're in for something awesome.

Being as I didn't actually finish the film, I should probably just end things here. The cast is fine, the effects work and set design are top notch, and the story, on it's own, is satisfying enough. It just needed a better director, plain and simple. Gary Fleder, while comfortable in the thriller genre and most importantly, the television format, has no business directing a science fiction film.
Posted by robotGEEK at 9:39 AM