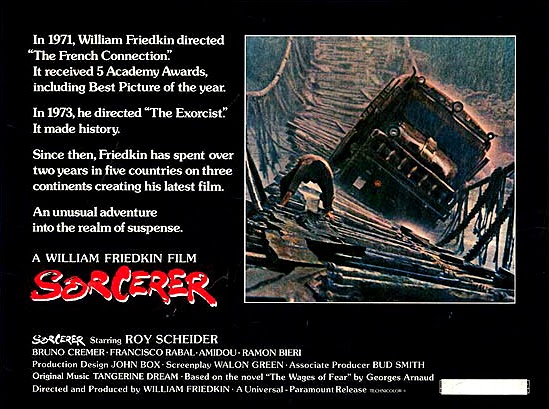 There are moments when we watch a film and impact us on an emotional level. For lovers of cinema, that's what it's all about. We want to watch a film and to be blown away, or in the least affected in some way by it. This applies to all genre's, and while it's true that I have a fondness for action, sci-fi, horror and bad movies, I love them all and don't discriminate.

And then of course, we eventually find ourselves watching a bad film from time to time, which is never fun, unless you want to rip that film a new asshole in a review. But then there are moments when we watch a film and experience it. When you watch movies as often as I do, you find that these moments are all too brief, but they can and do happen and when it does, it's pretty amazing. Such was the case with my experiences watching 2001, The Visitor, The Exorcist III, Equilibrium and even Bad Movie Night staples like Samurai Cop to name a few. And I am all too eager to include William Friedkin's brilliant tour de force Sorcerer into that club.

Sorcerer is a film that has been on my radar for a very long time now, mostly due to the fact that it's one of my good friend Ingo's favorite films. He's always spoken very highly of it, yet other than through him, I really hadn't heard anything about it. I knew it existed, and I knew it was a bump in the road for director William Friedkin's (The Exorcist, The French Connection, To Live and Die in L.A.) long hit or miss career, but other than that not much else. In case you're out of the loop, here's a quick rundown to get you caught up:

Released in 1977, Sorcerer is a remake of a french film called Wages of Fear, which is also the title of the story's original novel. This was Friedkin's first film after the wildly successful run of The French Connection in 1971 and The Exorcist in 1973. With a script by Walon Green (Robocop 2), the film centers around 4 individuals from different parts of the world with very different backgrounds who end up in the South American Jungle as day laborers. When an extremely dangerous job comes up, the promise of a very large paycheck seals the deal and they jump on board. But transporting gallons of nitroglycerin by truck through the dangerous South American jungle may very well cost them their lives.

When the film was released, it was a huge box office disaster, mainly due to the fact that the title Sorcerer is very misleading (who wouldn't think it was about sword & sorcery?), along with having the unfortunate luck of being released the same time Star Wars hit theaters. Mainly considered a lost or forgotten gem, it never even got an official DVD release, only having been released on VHS and Laserdisc, and never in it's original widescreen aspect ratio. That is until Warner Brothers finally released this on Blu ray just this past year for the first time, nearly 40 years after it's original release, preserving it's original aspect ratio and supervised by William Friedkin himself, to much critical acclaim.

Sorcerer is without a doubt one of the most intense, thrilling and satisfying film experiences I've ever had. William Friedkin has easily crafted one of the best thriller/drama's ever made, utilizing anything and everything at his disposal to create a film that packs a punch both visually, and on an emotional level. When the end credits begin to roll, and the first words out of your mouth are "Wow", you then start to question how the hell did this film not make money, sweep the Oscars, or go down in history as one of the best films ever made? I can't explain it, but some have surely tried in the 40 years since it's premiere. While it's odd choice of title and going up against Star Wars surely had a lot to do with it, it seems also that the beginning may have turned a lot of people off as well, both in it's structure and the fact that large portions of the first act are utilizing subtitles, which if you're not expecting that, can throw some people off. But that's only the first 30 minutes or so, as the rest of the film is in English. Still, that creative decision seems to have resulted in confusion for the audience who apparently walked out of the film thinking they were watching some foreign film. I'll admit, the first act threw me off as well. I knew what the story was about going in, yet for a full hour we're introduced to 4 completely different stories that have nothing to do with each other, and even I was left wondering what, if anything, any of this had to do with anything. The best advice I can give is to be patience, because the payoff is simply amazing.

While Sorcerer has a slightly unorthodox structure, believe it or not, it works. And while it seems Friedkin used two cinematographers to complete the film (one quit midway due to Friedkin's demanding nature), the visual brilliance of this is overwhelming. Gritty when it needs to be, and visually poetic at other times, the overall aesthetic is mind-numbingly gorgeous. Thanks to Friedkin's supervision of this Blu ray release, the color pallet is insanely vibrant. Colors pop like you wouldn't believe, and coupled with the 1.77: 1 widescreen format, Sorcerer is a thing of technical beauty.

While all of this is what makes a lot of Sorcerer work so well, let's not forget the cast, all of whom deliver the goods. Starring a handful of international actors well known in their homelands, it's really Roy Scheider's show and he is fucking amazing. There is nothing that this guy can't do as an actor, and if there was ever any film that could drive that point home, it's his knockout performance of a man who's troubled past never seems to be far behind, and who's natural leadership shines when the situation calls for it. Even though he had just starred in Jaws the year before, Scheider was not yet a huge box office draw. Friedkin has stated in interviews that casting Scheider was the biggest mistake in his career because of his lack of star power, yet watching Sorcerer you'd think Friedkin was nuts. Roy Scheider shines in a powerhouse performance that's both physically demanding as it is powerful.

Tangerine Dream's (The Keep, Legend) moody score is another component of what makes Sorcerer work so well. Utilizing an impressive synth score, their hypnotic and atmospheric sound only compliment the impact this film delivers. Interestingly, a lot of the film has no score, only popping in from time to time. As a creative choice, I think it's brilliant. There are moments that are so intense and thrilling that even without music, they hit hard. It's as if Friedkin thought, wisely, that omitting a score during crucial sequences would only enhance them, and they do. But that's not to say that the moments when Tangerine Dream does come into the picture are not effective, because they are. There's just something about a synth score that just hits you hard. A long used tool for films back in the 80's (mainly horror), it's such a rarity now to ever hear one in a modern film that when you do come across a badass synth score, it's like running into a welcome old friend.

The bridge sequence. Holy shit. Nothing can prepare you for the punch to the gut that is the famous bridge sequence. No doubt a technical marvel for this sequence alone, this film lives and breathes by this scene's stunning use of old school practical effects work and it's ability to leave you breathless by the time this scene is over. Staged, shot and edited to perfection, the bridge sequence is arguably one of the most intensely satisfying sequences ever filmed. What's more, you know that they would never attempt to film that scene today purely because of safety issues. While some behind-the-scenes digging will tell you that it wasn't nearly as dangerous as it looks on screen, the fact that actual actors in the film were performing much of this sequence themselves is mindblowing. It's a flawless achievement of pure technical and visual genius and the highlight of the film.

Though it seems that I love or enjoy a lot of films I watch, that's not always true. As much as I love watching movies, even in my excitement I find myself let down quite often. Flipping that coin around, I sometimes go into others with low expectations, and end up being pleasantly surprised just because of it's sheer entertainment value. It might not be made well, but it was a helluva lot of fun and sometimes that's all I need. But then experiences like Sorcerer happen, and you're reminded why you love cinema in the first place. Sorcerer is a  tour de force experience that's equal parts thrilling, exciting, intense, dramatic, harrowing and most of all, deeply satisfying.

How to see it:
While you can surely stream it, I strongly urge you to pick up Warner Brother's stunning new Blu ray release. With a pristine and gorgeous new transfer supervised by William Friedkin himself, Sorcerer will just about be one of the best Blu ray purchases you ever make. Included is a 40 page book as well as a new forward by director William Friedkin.

Posted by robotGEEK at 7:19 AM