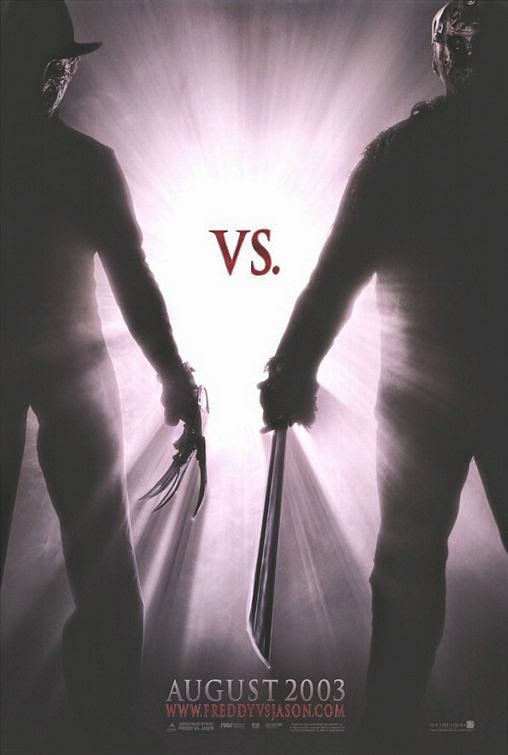 As I recently delved head-on into both Never Sleep Again and Crystal Lake Memories, nostalgia set in. These past few years I've been revisiting every film from both of these franchises, albeit rather slowly. As much as I love them, you can only take so much Freddy or Jason. I never wanted it to be overkill. But after finally finishing the awesome Crystal Lake Memories a few weeks back, I was in the mood again for a revisit to another slasher, but this time why not tackle them both with Freddy vs Jason? Especially after the documentary made it look like so much fun. Yes, I have seen it before, but as with most films that don't leave much of an impression on me, I remember very little about it. Also, I was just informed that FvsJ was the last time England donned the Freddy makeup, so there you go. More incentive to give this another shot.

If you're a fan of either of these series and remember growing up with them in the 80's and 90's, then I'm sure you're well aware of how long it took for this film to hit the big screen. At times, it never seemed like it would ever come to fruition, mainly because of legal issues since Freddy belonged to New Line and Jason belonged to Paramount. Years in development hell, the film finally got the green-light and after many, many drafts and screenwriters, ultimately they chose a script by writing partners Damian Shannon and Mark Swift, who would also write the Friday the 13th reboot years later in 2009. A film, by the way, that doesn't get the credit it deserves as being a straight-up badass slasher flick. Changes were ultimately made to their FvsJ script, but the majority of it stayed in tact into what eventually translated onto the screen.

So it's 11 years later and time to revisit this slasher mash-up, a film that many hoped would be the ultimate monster mash-up. Was it any good? Overall I will say that it's entertaining, with a fun vibe. It's really the final third act where things come to life, so unfortunately there's not as much "VS." as you hope there is for the majority of the film. And logic, apparently, has been thrown out the window. But you don't go to see these films for logic do you? No you don't. You go to see them for 2 things; nudity and badass kills, of which this film delivers only partially. Yea, sadly though there's a nice nude sequence right smack in the beginning to wet your appetite, but I don't recall any other scenes in the rest of the film. And while there's plenty of killing to be had throughout the film, with the exception of a few decent kills here and there, the majority of them are just either silly or rather forgetful. What helps moves things along smoothly is the cast, which is solid. And before the film comes to it's pretty kick-ass conclusion, there are indeed a few stellar sequences to be found, most notably when Jason suddenly appears at a party out in the middle of a corn field, where he's lit on fire and walking around hacking kids left and right. Visually, that was pretty cool and hard as fuck to pull off.

Something just always feels off about the whole thing though, like it's missing something. I can't quite put my finger on it, but it could be just the pacing, or just the lack of thrills or any real "wow" factor. I think some of that falls on director Ronny Yu, who gave us the Hong Kong fantasy film The Bride with White Hair, and also his first U.S. horror film with Bride of Chucky in 1998. While a very visually stimulating director at times, I found a lot of that lacking in this film, save for a couple of memorable scenes. The overall vibe just didn't gel very well for me. It's a good thing though that the film really ends on a high note, with one seriously epic battle between two unstoppable titans. But it's still hard to shake the feeling that it could have, or "should" have rather, been better, considering how long it took to get the damn thing made. And while the guy who donned Jason's hockey mask was pretty good, the biggest Jason to date FYI, Jason lacked a lot of what made him work when he was portrayed by Kane Hodder, the majority of the Friday series favorite Jason. Hodder may very well have added that little something the film was missing, but then again maybe he couldn't. I guess we'll never really know.

The cast is really solid, Englund is hamming it up again, though not nearly as bad as he was in Nightmare 5 or Freddy's Dead, and Ken Kirzinger as the biggest Jason to date added to the film's over-the-top vibe nicely. Regrettably, FvsJ doesn't know if it's trying to be camp or satire, and treads that line rather closely, never swaying too far in either direction, like it can't make up it's mind. If only the film we had waited decades to see had been slightly better executed with a sharper script, then I think FvsJ would have ended both of the franchises on a high note, instead of just another entry in the slasher film genre.
Posted by robotGEEK at 8:52 AM